Outfit Day!!! We stuck with green this week, but fear not, we made it extra fun! And with boots I haven't worn on Thursday's Threads in awhile. But before we get to me, let's see what Al wore this week.

Bridle: Joseph Sterling
Browband: Made by me 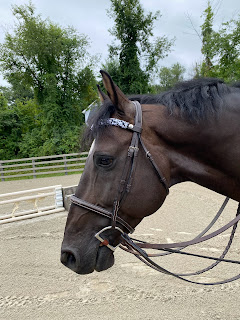 Heh, so funny story... I have two vets, one for sports med stuff and one for things like vaccines and routine whatnot. But then there's a third one that the boarding barn uses for those things too. So my routine vet first met Al this week for his dental appointment. And at first glance he asked me if he has an overbite. (Before actually looking in his mouth obviously.) And I laughed a little and said "believe it or not, he does NOT!" And doc opened his mouth and was like you're right! He just has a very tight bottom lip apparently. He's Pammon's opposite when it comes to bottom lips. Anyway, love this bridle on him!
Boots: Celeris UK
Bell Boots: Busse 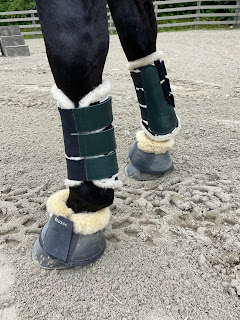 The Celeris brushing boots are REALLY nice. The only negative with this particular pair is that because the cow print is furry, you can't really clean them. So we use them only on dusty days and never when it's muddy. If you ever want to get a pair, stick with smooth leather so you can clean them!
I've added soft but sturdy bell boots to Al's riding attire to help protect that quarter crack a little more. He sometimes forges and I think that's not helping in terms of getting this thing to grow out. Plus he's wearing bar shoes right now, so the bell boots aren't a bad idea anyway.
Saddle: Butet
Baby Pad: Hopeful Equestrian
Half Pad: Mattes 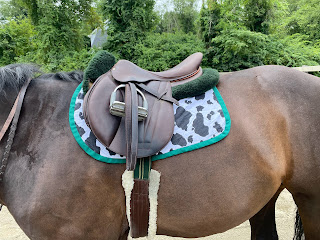 These baby pads are adorable. Hopeful Equestrian is out of business now which is kind of a bummer because she would make anything my ridiculous brain could come up with and was pretty reasonably priced. Fortunately, I am (at least for the moment) out of ridiculous ideas.
That's what Al had on, and here's what I wore:

Yep, you're seeing that right. I am wearing tights. Which is a rarity. I dislike not tucking in my shirt and not getting to wear a fun belt.
Helmet: One K CCS MIPS 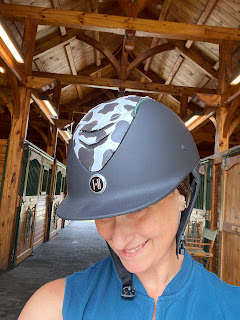 The realization that I could wrap the One K pieces in vinyl was a great one for me...
Shirt: Amazon 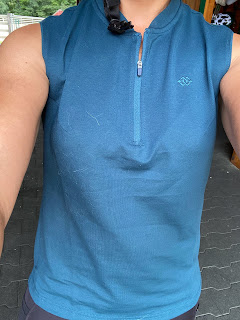 During the last heat wave I ordered myself a few sleeveless tech shirts. I'm super cheap and didn't want to spend a lot for something I won't wear too often, so I took the Amazon route. I know. Amazon is the worst. But sometimes you need to be economical and they were there for me for that need. These tops are pretty nice honestly, I would recommend!
Tights: Botori 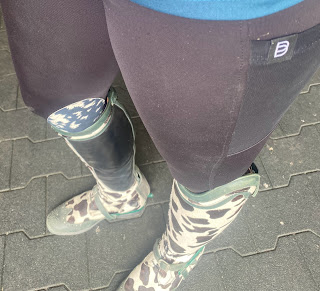 I hate tights generally. But I couldn't resist these with the cow print patches. Begrudgingly though, I will admit, these are VERY comfortable. They stay put really nicely which is generally my complaint about tights. And the cell phone pocket is pretty great. Wish more breeches had one of those.
Boots: Celeris UK 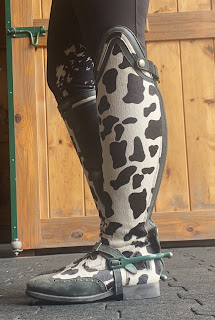 Sorry my inside photos are so hazy... My lens was dirty and I didn't realize it until after. But anyway... I think these are still my most favorite Celeris boots. They're a little too big for me now, especially with the tights, but even still. They're pretty fabulous.
And that's it for today! Any favorites?
Posted by Stacie Seidman at 11:15 AM