Happy Outfit Day! Being that this could be Pammon's last chance to participate in Thursday's Threads, I chose him to be our model today. Here's what we wore: 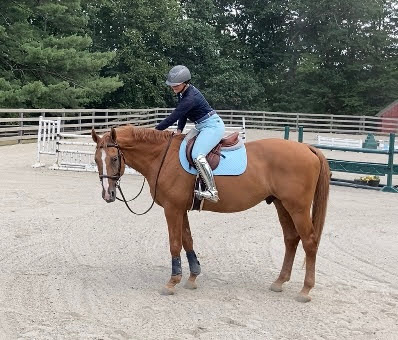 I think this is a great color on him! He seems to like it too. 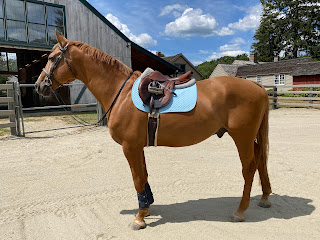 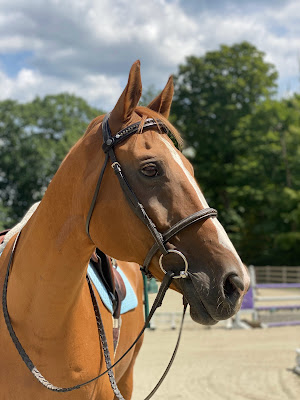 This is a rare sight! Pammon with his lower lip NOT hanging! Haha! I love this shot of him, he looks so handsome! And yes, when Al's Joseph Sterling bridle finally arrived from its backordered state, I gave this one to Pammon. Poor kid, always getting the hand me downs. 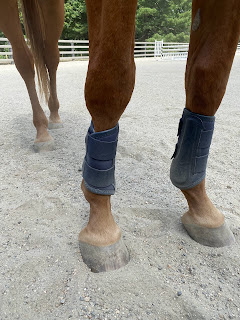 We went with navy boots to tie in with my outfit.
Saddle: Butet
Saddle Pad: Smartpak
Half Pad: Ippico 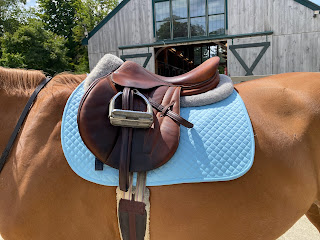 I picked up a few of these light pads from Smartpak when they were on sale for $12. How could I not? I actually really like them! They're very thin. Heavier than a baby pad, but not by much. If you like a minimal pad, I recommend! Can't speak for longevity yet, this is the first time I've used it.
So that's what Pammon was wearing, and here's my outfit:

Back to navy I guess... but it's been awhile! And it is a nice color anyway.
Helmet: One K Defender Glamour 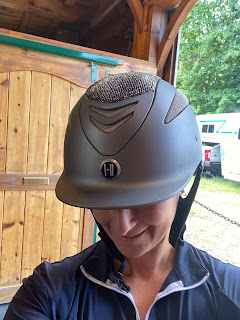 I nearly forgot about this helmet! It only has a couple years left until I have to retire it, so I'll try and wear it some more and get my moneys worth out of it. It does not have MIPS, but it still a nice helmet.
Top: Equine Couture 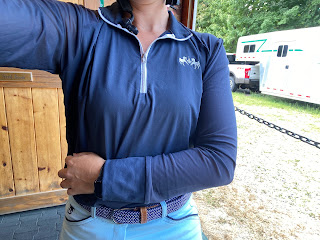 One of you bloggers made me buy this shirt a few years back. Probably Amanda, but might have been Karen. The sleeves are mesh which makes it perfect for a breezy summer day. I also have it in black. And they both had somehow been buried in the back of the dresser and I never wore them. Soooo... my bad. They're in the rotation now!
Belt: Blackfort 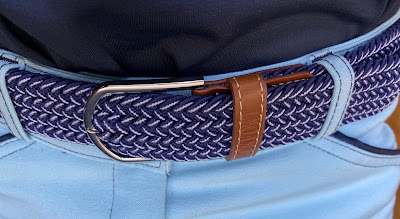 I'm generally not a big fan of these elastic belts, and I wouldn't buy one. But this one came to me in a subscription box, and it looks fab with this outfit. So I wore it. It's very nice if you like stretchy belts!
Breeches: Smartpak Pipers 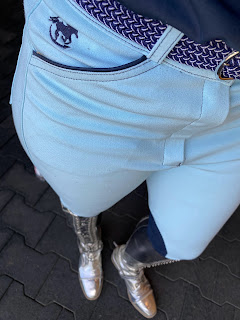 I know, I know. I don't like Pipers. Never do. But I thought I might like these high rise ones better since my struggle with them generally is that they get saggy crotch. I figured the high rise might remedy that situation. It did not. I like the color though. So there's the positive. It's really the only one I can come up with. They were terribly pilled in the crotch area after just one day of riding. Granted, I rode four horses. But still. One day. Meh. Hopefully I'll learn my lesson and stop buying Pipers.
Boots: Imperial Riding 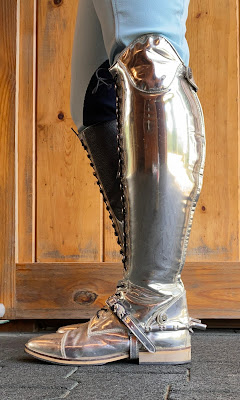 Listen. I know these boots are ridiculous. Fully agree. But I LOVE them. They're so comfortable, the fit is great, and they were very inexpensive. They were limited edition, so I don't think available anymore. I hope one day they make gold ones...
That's it for today! What do you guys think? Any favorites?
Posted by Stacie Seidman at 7:49 PM