Happy Outfit day friends! We had some fun but didn't take it too far today... that's coming though. Summer's just getting started! Anyway... Here's what we wore today: 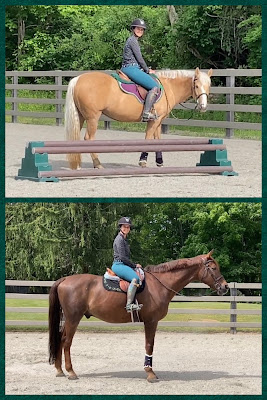 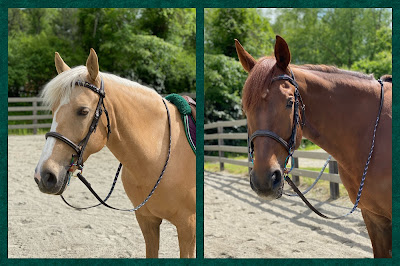 These aren't their best quality bridles, but they do the job for occasional use. And they look pretty darn adorable in them!

Saddles:
Shiny- Custom Saddlery, Eros- Butet
Saddle Pads:
Shiny- Premier Equine, Eros- Smartpak embellished by me with an Ippico half pad, and an unbranded riser cover for a little lift. 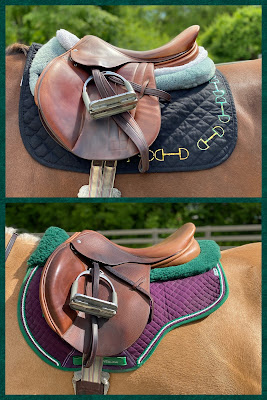 I've always felt like Eros could use some rear shims as I ride a bit up hill on him. But I was always reluctant because I was afraid it would change the fit over his withers. After chatting with the Butet fitter when she came out for Al, I figured I'd see how a tiny lift might go. I found this old lollipop cover which gave me just the little lift I needed (it's empty!) and didn't alter the fit on his withers at all. He has a shimmable Mattes pad ordered so we can look a little more modern in the future.
Boots: Punk Ponies 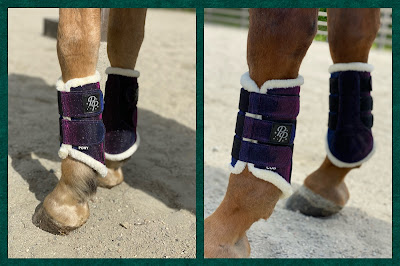 It was a bit overcast for Eros' photo so it's hard to see, but these boots shift color depending on how you look at them. I was stupid excited when Punk Ponies debuted them and ordered immediately. Good thing I did as they have nearly sold out of them!

That's what the kiddos had on, and here's what I wore: 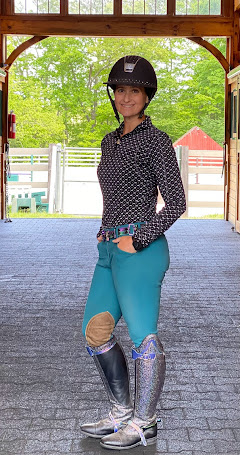 I love all the unicorn colors in this photo...
Helmet: Samshield 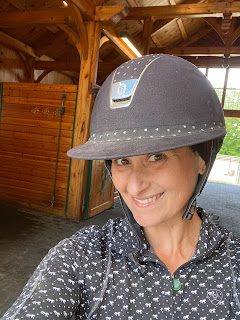 While I still wish Samshield cared enough to use MIPS, I very much love this helmet. The holo shield and rails is so, SO fun!
Shirt: Ariat 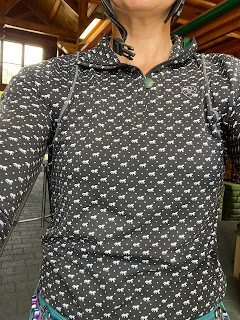 I really like the Ariat shirts for this in between weather we're having. It's comfortable out (high 60's) but too cool for a thin sun shirt. And definitely not warm enough for a tee shirt. It's hoodie weather if you're just hanging around, but a hoodie is WAY too hot if you're actually doing stuff. So these shirts are the perfect solution.
Belt: Made by ME! 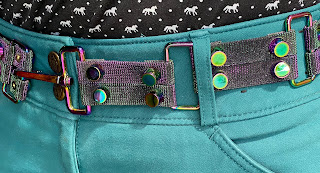 Back during the height of the Pandemic, we were working off two week allotments at work. Which meant that we'd have one week of being insanely busy, and then have barely anything at all to do the second week. During one of those slow weeks I made this belt. You can tell my boss if you want, they already let me go ;) This belt has almost the same material as the horses' boots. This leans more purple/green though, and the boots are more purple/blue.  Close enough though!
Breeches: Tailored Sportsman 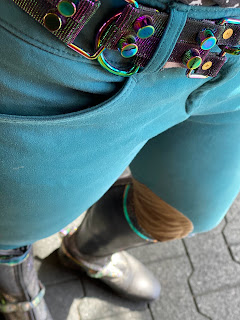 This color is called Dark Teal, and I really love them. I love them so much, I actually bought them NEW and paid retail. They have the sock bottoms, so you know I really loved them. So expensive. But I had sold a bunch of other breeches and thus, I felt I could validate the purchase.
Boots: Celeris UK 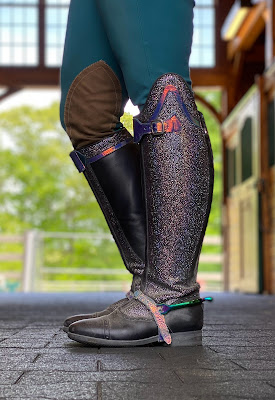 They're still gorgeous, aren't they?! I love these boots. I am VERY sad that they are considerably too loose in the legs now though. I'm going to see if I can get these and a few of the other pairs taken in at some point. I think that would be more cost effective than selling and replacing them. Plus, who knows if I'd have any luck selling them. And who wants to break in more new boots? Not me. In the meantime though, I'm just going to keep wearing them too big.
Other: Crop 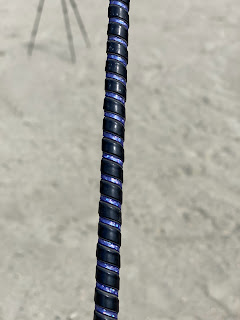 I got this stick YEARS ago from the harness track tack store in Saratoga. I had forgotten all about it until recently. It matches quite nicely with all the unicorn stuff!
And that's it for today! Any favorites? Anything you're waiting to see? Any guesses as to what I might have up my sleeve for a crazy outfit? (Amanda, you can't answer that!)
Posted by Stacie Seidman at 8:57 PM