None of my new outfits were ready for outfit day this week, which was annoying. But I came up with an outfit that eight year old me would be proud of. (Eight year old me is having a lot of fun dressing me lately.) We can start with what the horses wore. 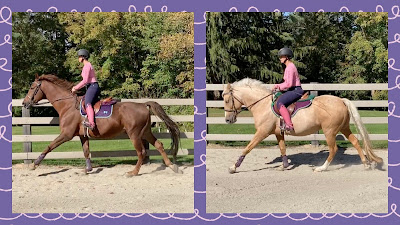 Well, I mean, in all fairness, I take my outfit photos on Wednesdays, and, according to Mean Girls, we are supposed to wear pink on Wednesdays so... Here we are. Despite Eros being a loose horse in his photo, he still has that huge reach with his shoulder, doesn't he? We just started cantering again, so I haven't yet asked him to come together. Still cute! Shiny has decent reach through her shoulder too. I really think her canter has improved a lot since last year. 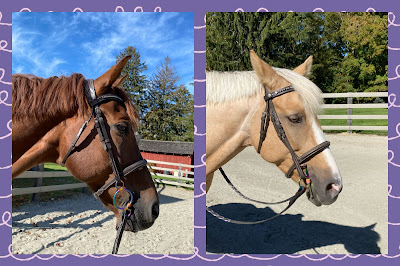 Shiny was not having her photo taken this week. She's REAL grumpy about the last flies that are still hanging around. Eros was happy to oblige at least.  These are the same bridles as last week, but Shiny's rainbow leather bit came back, so she's fully put together now! 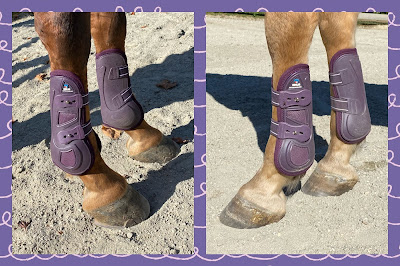 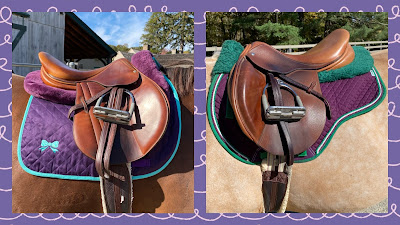 I've had that Lettia pad for awhile but apparently had never used it. Guess we need to wear purple more often! I'm a big fan of the Premier Equine pads with the half pad built in. I just wish they were better with colors. The all green one they finally made has orange piping. I bought it anyway, and pretend that it's tan... but still. All green would have been better. Or green with tan but that might be my own personal preference only... Or green with brown... or even with navy. So many better options than orange! But I digress. This one is their old style, and not available any longer, but I do like this combo of green and purple.
Okay, my turn! Here's what I wore: 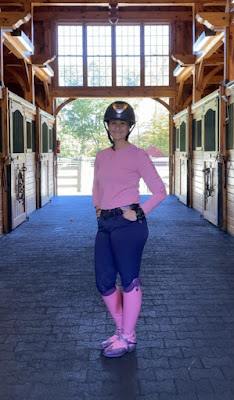 I mean, lots of colors look nice with purple. But pink and purple is iconic (if you're a child anyway).
Helmet: One K CCS Mips 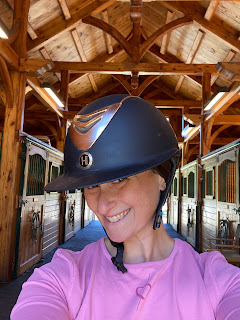 I don't have a helmet in either of the colors in my outfit, so I went with the rose gold and black one. I think it works just fine.
Shirt: Equetech 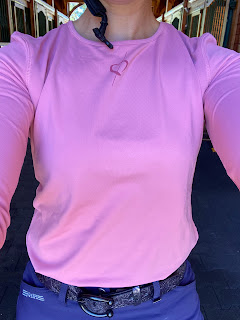 I used to be really big into subscription boxes when I had more expendable income. But I've canceled most of them at this point. I do however still get one from a UK based company called Forelock and Fringe. I've kept this one as they have introduced me to some brands (and amazing snacks!) that I would not have discovered otherwise. This top was in one of their boxes, and I like it so much more than I expected to! It's base layer weight, which is perfect for fall here (or spring). The fabric is lovely and I like the fit too.
Belt: Guess

I actually think I was still in college when I got this belt. It's THAT old. It's in great shape though, and I love the color and the star print.
Breeches: ROMFH 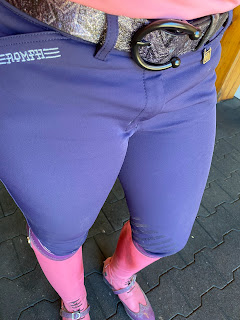 I missed out on a pair of used purple TS breeches awhile back and got a little obsessive trying to find purple breeches. I couldn't find these ROMFH ones in my size either, but I did find them in long, so that's what I wound up with. Are they too long for me given I'm 5'2"? Obviously. But I don't have to cuff them, so I'm saying they work fine.
Boots: Celeris UK 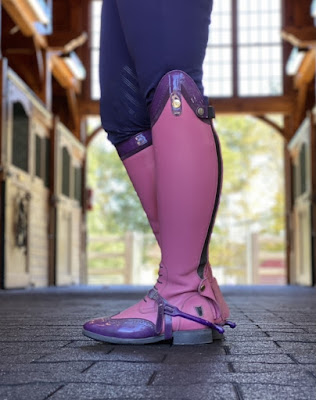 This pair actually fits a little better than some of the others. I think because I didn't wear them as much when I first got them and was heavier. Thus, I didn't stretch them out as much? I dunno. Whatever the reason, they aren't as big as the others. This pair broke in really fast, and are SUPER comfy.

And that's it for today! Any favorites?