Rio's Aunty Tracey owns one of my favorite local tack stores, Reins. For his birthday, Tracey gave Rio a pad from United Sportproducts Germany (USG) and a matching fly bonnet. He won't wear the bonnet, but he said one of brothers can use it. Just this weekend, we finally tried out the pad, and Rio and I both LOVED it!
I'm enamored with the color scheme Tracey picked out for us. It's Hermes colors, which is fun with my Hermes saddle.

Normally, I just use a thin baby pad along with my sheepskin half pad. I think a thick pad can get bulky, which is why I avoid them. But since this was a gift, I wanted to love it, and give it a fair chance. I'm glad I did!
Lately, and I think it has to do mostly with Rio's change in body shape and his awkwardness left by the EPM, the baby pads slip down as we ride putting pressure on his withers. He hasn't complained, and he doesn't have any rubs, but it looks really uncomfortable to me. He doesn't have particularly high withers

but he is starting to have a bit of dip in his back. Don't tell him though. He doesn't think he's aging. And here is what I love most about the USG pad:

The spine arches up at the withers to provide wither relief. Despite both lunging AND riding, the pad never sunk down to pull across the withers. It stayed up in the pommel of the saddle right where it's supposed to.
They range in price from 49.95 to 59.95 depending on where you shop. They come in a ton of colors and they all have matching ear bonnets available too. I might have ordered two more in my barn colors... 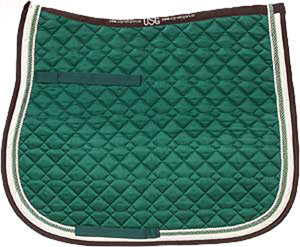 And maybe the matching bonnet... 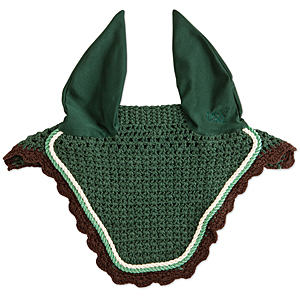 If you have a horse with a high wither, I urge you to check out these saddle pads. Two ears up from Rio!
Posted by Stacie Seidman at 10:27 PM