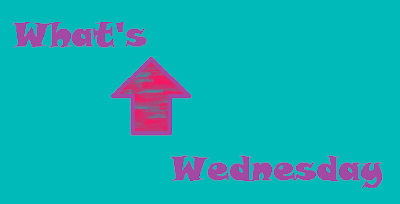 It was a quiet horsey week here with Thanksgiving last week. But the weekend was really nice so we got to ride outside without freezing.

Eros had his lessons last week early and you've already read about those. We did our flat lesson this week on Tuesday like normal and he was hilarious. He was very good, but had about enough about half way through and started pulling his face down to the ground. His body worker was out this week and reported that the loaner saddle is making him sore at the base of his withers so that's not ideal. And might be why he wants to stretch his head down so much. But he also just likes to do that. So who knows for sure. Either way, I'm waiting on payment for one possibly two of the saddles I have for sale, so once that comes through, I can look into getting something for him that fits better. Otherwise his body work visit went well and he had a good report there.

Al... oh Al. Al is either wonderful or a total ass hat. That's where we're at. He was so happy to ride outside Sunday and was completely relaxed and didn't spook. A real rarity! Tuesday I had probably my worst ever ride on him. We were back indoors much to his dismay. And I could barely get him to go around the ring. So today I let him have a training ride and I hear he was good for that. (She did him before I got there today.) He's no dummy. Trainer just keeps kicking until she gets what she wants. I would also do that, but my fear of getting spun off makes it very hard for me to accomplish at the moment. Hopefully all in good time that will work itself out. I still love him, and I think he's amazing in almost every way. We're just stuck in a bit of a rough patch. I mentioned his behavior to my vet who suggested we pull a lyme titer so we did, and maybe there will be an actual reason for his nonsense. I don't really expect there to be, but it doesn't hurt to make sure. He saw the body worker this week too and got a pretty good report. He's still bracing around that quarter crack foot some, but it doesn't actually seem to be bothering him. Hopefully it will be better next time she comes now that he seems to be doing better on it.

Little Shine has been feeling pretty blah. So I had her on the list for the vet this week. She skipped her lesson last week since it fell on Thanksgiving. Since she felt so crappy in her lesson the week before I figured it wouldn't hurt her any to have the week off from jumping. In fact, she had a really easy week. We are allowed to ride on holidays at the barn. So even though her brothers had to work on Thanksgiving, I just hopped on her in a halter, lead rope, and her blanket, and took her for a walk around the indoor that way. Sunday was a similar ride... I had tacked her up fully intending to work her, but wound up just chatting with someone else walking a horse for 30 minutes and called it a day. The vet watched her go Tuesday and did some flexions. We talked about the doxy and how it seems like she's feeling worse while on it than she did off of it. He says if that's the case, we'll just finish the tub she's on, and not do the additional two weeks that's normal protocol. He thinks we need to do hocks with steroids this time as the alpha-2 really didn't hold for her. The body worker felt she was kind of a mess all over and said that she's acting like the horses she works on that are insulin resistant. The regular vet agreed that Shiny is ridiculously tight in her muscles all over. And we agreed that we should hold off on injections until after running glucose and leptin tests. So he took blood and pending those results we will decide how best to proceed. I am planning to lesson on her tomorrow, but if she tells me jumping is too hard right now, we'll just quit early. She got clipped this afternoon though... so she may be feeling pretty good tomorrow. Hopefully not TOO good... Lol!

In other news, I got to braid a pretty horse for a holiday photo shoot this week! Her owner wanted something a little fun and different, so I did that scallop type thing where the scallop is over the top of the braids. I've never done it before, and it really requires a longer mane, but I got it to work and it cane out really cute! We also added bows for some extra holiday spirit. The forelock was the cutest. 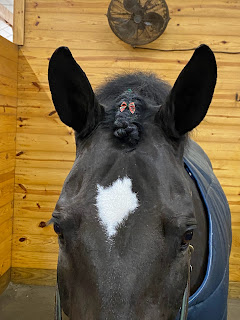 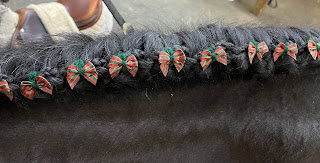 And in other, other news.... I finally figured out what to do with that cute black and white composite I made of the horses faces and my logo... 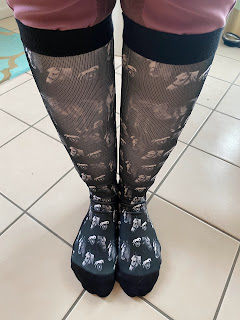 Yep, I put it on socks!Why not?
That's about it from here. Hope you're all having a great week!
We're having a random wind and rain storm here right now, and I'm running on generator power... Let's see if this manages to post.

Posted by Stacie Seidman at 9:07 PM