Outfit day again! Since it's officially fall, and navy season is probably coming, I'm getting all the green in that I can. So it's green again today! I reached into the archives for the horses' outfit today. Al is modeling for us this week. Here's what he wore: 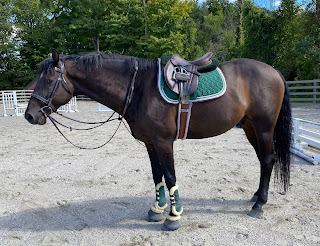 I think the few weeks of light work weren't all that bad for him. He's looking relaxed and, well... a bit chunky if we're being honest.
Bridle: Pinnacle
Browband: Boy O'Boy Bridleworks 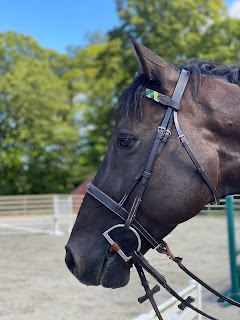 He sure is cute... And look, his fake overbite isn't showing too much here!
Boots: QHP 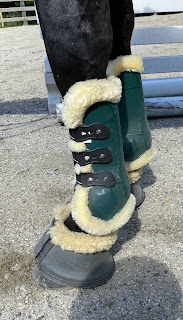 I've mentioned before that I can't help myself when I see green horse boots. So when I saw these, obviously I bought them. They're really cute on the horses, but especially cute on the pony. Tiny, fluffy horse boots are just adorable.
Saddle: Butet
Half Pad: Mattes
Saddle Pad: USG 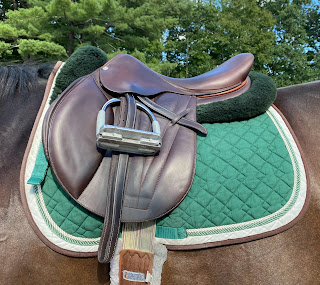 I'd forgotten all about having these pads. They are pretty old. I bought them when I still was riding Rio and Jampy. They've been tucked away in a tack trunk ever since. I rediscovered them this weekend when I was hunting for something else. I'm so glad I found them! I have three, so I'm guessing I must have bought these when Ducky was still around. They're nice pads. They are a nice thickness, not as thin as a baby pad, but not a bulky pad either.
So that's what the horses wore. And here's what I had on:

This photo shows a teal hue to the breeches, but they're really a brighter green color. Photos can be so deceiving!
Helmet: One K 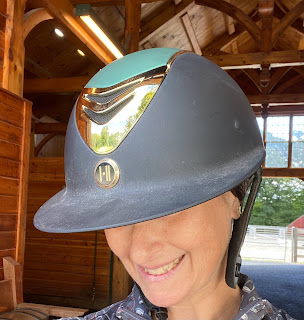 I shuffled my One K's around a bit after I finally found yellow gold parts for them! I had my black and rose gold pieces on this wide brim helmet, and the not wide brim one was green and rose gold. I decided to make the narrow brim black and rose gold, and moved the green center piece and the gold parts to this wide brim. If only they would make a green or brown mips helmet I could have one that's fully my colors... Until that day, this is as good as it will get. I like it though! The gold is very shiny!
Shirt: Dover 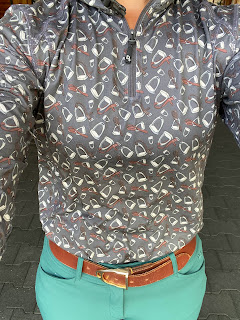 Iv'e had this awhile too. It's perfect for fall with the dark colors and I like the stirrups with leathers motif.
Belt: Vintage Dior 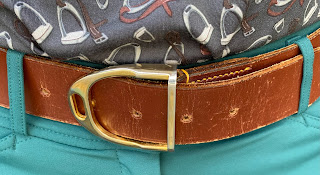 I found this belt years ago, either on Ebay or Poshmark. I can't remember where. It was old then, and now it's really old. but I think it's really classic and pretty. I should probably oil it though, it's starting to crack a bit.
Breeches: RJ Classics 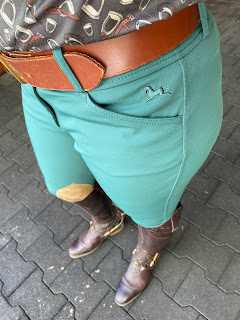 This color is June Bug. It photographs a little different than it looks in real life. In photos it's almost the same as my TS breeches in Ocean, which is like a pastel teal color. But in real life these are sort of a more yellow hued hunter. If that makes sense. I wish I could get them to photograph more accurately. Even the stock photos aren't quite right.
Boots: Mountain Horse Sovereign Lux 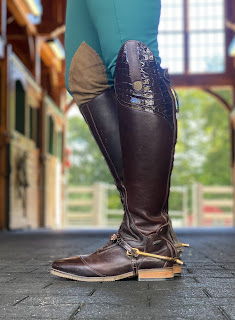 I snagged these on sale I think last year? They're very nice boots, pretty comfy and I love the crocodile on the top. I don't think I'd pay retail for them, but would recommend if you found them on sale someplace.
And that's it for today! I shall leave you with a photo of the outfit in action on each of the horses. 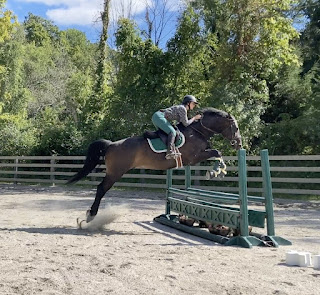 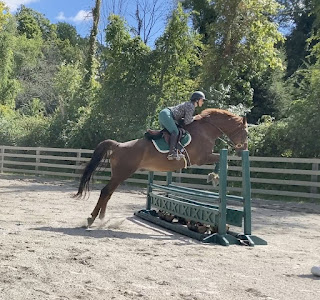 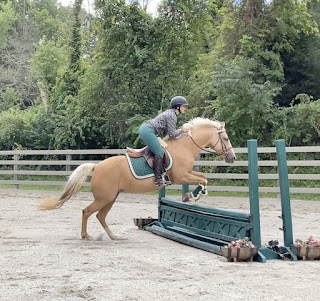