Outfit Day! I feel like we just had outfit day a minute ago. But here we are again! In honor of the horses coming home, I went with a green theme for this week. Al is going to be our model for today! Here's what he wore: 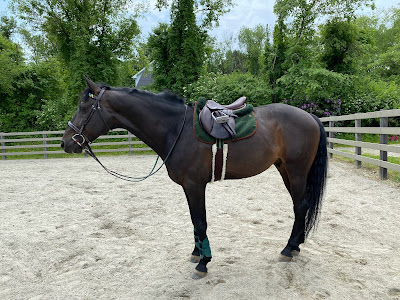 Ha... Not the best confirmation shot by any means! I had to snap it quickly because Al is too goofy to stand on his own for any length of time.
Bridle: Pinnacle Hartford Hunt
Browband: Boy O'Boy Bridleworks 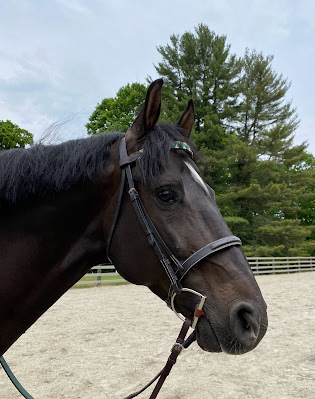 This is this bridle's first use, and full disclosure I haven't even cleaned the shipping wax off it yet let alone oiled the thing... So forgive that the noseband isn't sitting so neatly. Not the bridle's fault! I much prefer the Joseph Sterling version of this bridle as the leather is much nicer on the JS. But these were on sale last summer for $79 (WITH REINS!) and so they're just fine for everyday. The other horses have the lighter color, this one is the Havana.
Saddle: Butet
Saddle Pad: Anatomeq
Half Pad: Mattes 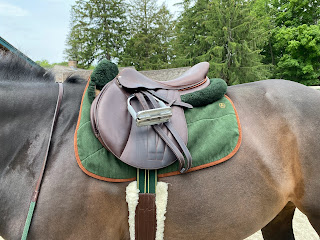 Still rocking the loaner saddle. It will be a couple months before mine is ready, but I'm pretty happy in this one for now. I will be so excited to have the more forward flap when it arrives though! Also, loving these Anatomeq saddle pads. They're pretty expensive, but she has sales often, so if you're interested in one, keep an eye on her instagram for a discount. They are perforated and meant to be cooling which I think they are. More so than regular pads anyway. She has some new color ways coming out soon, and I'm looking forward to seeing them!
Boots: Horze 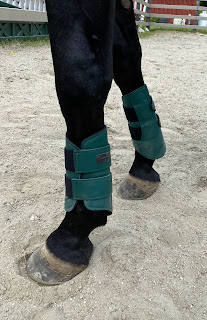 I have some kind of affliction in which when a company makes green boots for the horses I have to buy them. I imagine it's some kind of compulsion. These proved to be a bit tricky though, and here's where I rant a little about Horze. Apparently, they don't sell everything in the US via Equinavia that they do in Europe. For example, these boots. In the states, you can only get size Cob, Horse, or Warmblood. My horses all wear cob on the front legs. Shiny needs pony. So at first I was all, well I guess I won't get them then since they don't have Shiny's size. But then I discovered they DO come in Pony, but not here. Only in Europe. The European site will NOT ship to the US though. So I reached out to them, first via Facebook where I was told they weren't able to help me. So then I reached out via email and basically received the same response. So I asked for some retailers that could possibly have them available. I figured lots of websites will ship to the US. They were like we don't know, maybe this one. (I forget who it was at this point.) I checked out the recommendation and they didn't even carry Horze products! Seriously, pretty terrible customer service from Horze. Anyway, I eventually found the pony size on Ebay. Cost me a little more, but I did finally get them and now everyone can wear these green boots. But what a hassle. And why on Earth would they not stock all sizes here?! There's also a matching helmet I wanted, but that's not available here either. I'm guessing in that case it hasn't done the proper testing for the US market. But I can find no reason that they wouldn't carry pony size boots here.
So that's what Al is wearing, and here's what I have on: 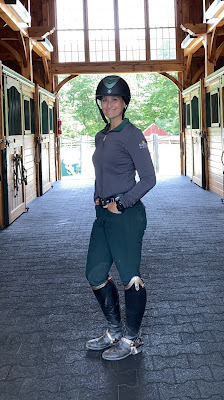 See? I really didn't get crazy this week!
Helmet: One K CCS Mips 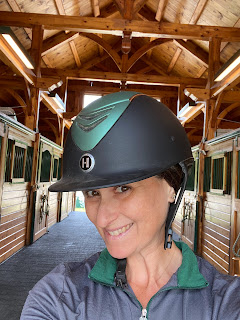 I went with the green inserts and rose gold rails. Figured it tied everything together. Rose gold and black boots, green breeches and shirt trim... It's all there!
Top: Kastel 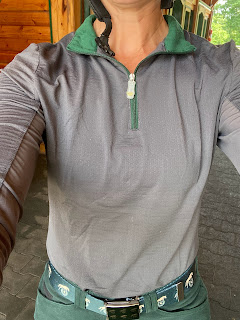 I've had this shirt for a few years now. I think it was Dover I got it from. They had them on clearance and I got this one and one with purple trim. They're holding up well!
Belt: Zazzle 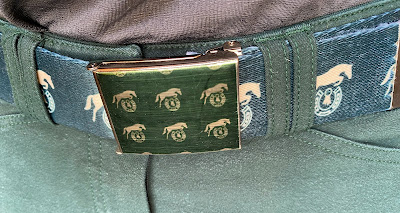 You've all seen this a few times now. I'm a big fan of the Zazzle site. You can make almost anything at all over there! What's fun about these belts is you can design both sides so it's reversible. This one has the farm name on the other side with the logo just on either end.
Breeches: Dover Dalton 9000 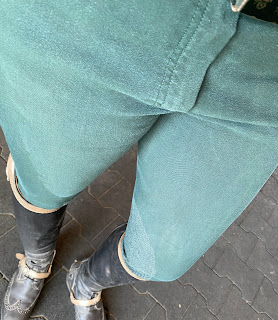 These are the super inexpensive breeches from Dover. They fit similarly to the Wellesley but are a lighter weight fabric. They are fading some, but otherwise are holding up okay. For the price I can't ask for perfection! They're comfy though, and as long as some fading doesn't bother you, I would recommend them.
Boots: Celeris UK 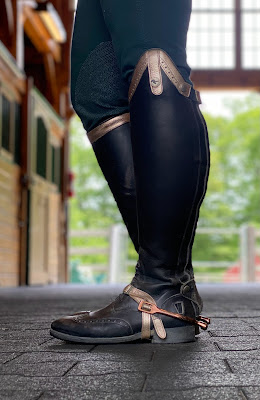 These were my very first pair of Celeris boots. The are still gorgeous. I think they've had the most use too as one year they were my main boot while boarding. For the most part, they are holding up great! The leather (despite my never taking care of them) is in perfect condition, as is all the stitching. The soles are starting to wear (expected given they are four years old now) and one of the snaps broke. Those are both easy enough to have replaced though! I think eventually I will reach out to see if I can send them back to be resoled and maybe get the leg taken in so they fit my new slightly slimmer calves. I'm really impressed with how they've held up though. My De Niro's only last about a year generally, and these are four!
And that's it for today! Any favorites? Anything you're waiting to see? Do you have any fun new riding outfits to share?
Posted by Stacie Seidman at 10:57 AM