Outfit Day! This week I modified Leah's request for the unicorn outfit. Instead of the shiny Celeris boots, I went with a pair you all haven't seen in ages! I know because I can't remember the last time I wore these... So we'll start with my outfit so you don't have to wait any longer for the reveal.

That's the face one makes when a car pulls in the driveway as I'm taking a photo of myself... Not awkward at all...
Helmet: Samshield 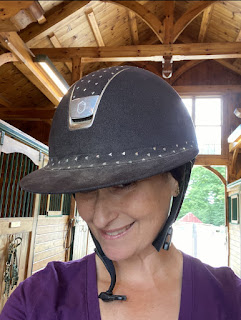 I have some strong opinions about Samshield and their refusal to add MIPS to their overpriced helmets... But this thing is gorgeous. #sorrynotsorry
Shirt: Stacie Original 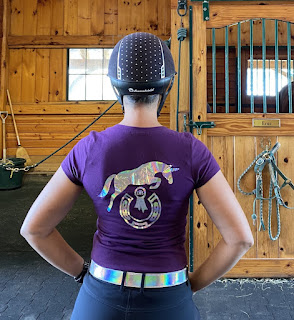 I will love this shirt always and forever. Hope that doesn't come off too conceited since i made it... Lol! But my logo with a unicorn horn is one of my favorite things. Plus it's all shiny and stuff.
Belt: Standard Issue Equestrian 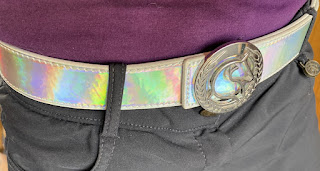 I don't own any of Standard Issue's horse wear, but I had to have the holo belt for obvious reasons. Looks perfect with the unicorn shirt, don't you think?!
Breeches: Ovation Aqua-X 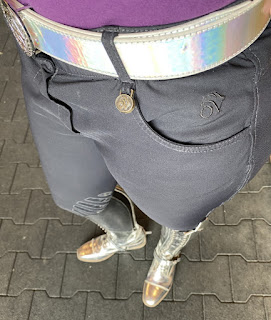 I've had these awhile now, and would love to replace them with a size down, but they are very sadly discontinued. Boo. Why do they stop making everything that's decent?
Boots: Imperial Riding 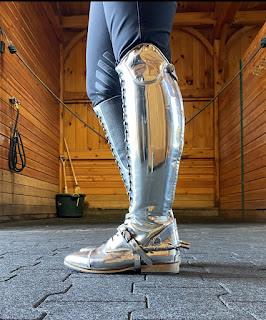 These are probably the most ridiculous boots I own. And that's saying something since we're talking about me here. The only thing that might make them even more insane is if they were holo instead of just silver. But I love them as they are. They're actually very comfortable too. I think the footbed is memory foam. I hope someday they'll make some other ridiculous boots.
So that's what I wore this week! Eros is our model this week, and here's his outfit: 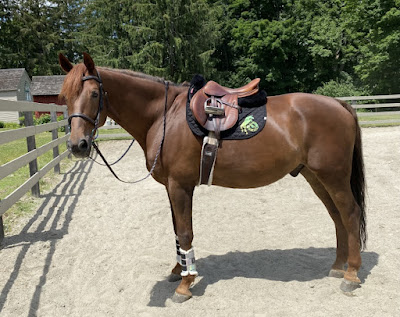 He sure does take his modeling career seriously, doesn't he? Look at him! So cute. I can't handle him.
Bridle: Royal
Browband: EvoEquine
Bit: Punk Ponies rings and Sweet Billy's mouth
Reins: Pink Noses Studio (Etsy) 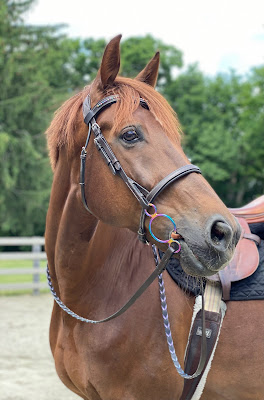 I have to thank my noisy neighbor for this adorable photo of Eros giving his best blue steel. He wasn't into the closeup shot at all, until my neighbor made a huge commotion.
Saddle: Butet
Saddle Pad: Lettia with some Cricut embellishment
Half Pad: Le Mieux 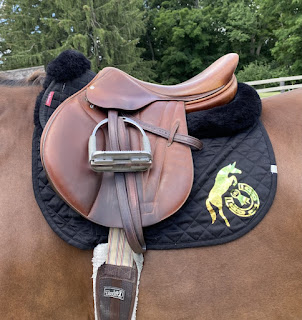 This half pad has shims in it so I don't have to ride up hill anymore. Definitely has made a good difference! I got him this black half pad for now, but also ordered him a shimmable one from Mattes in our colors. That one will be awhile though.
Boots: Punk Ponies 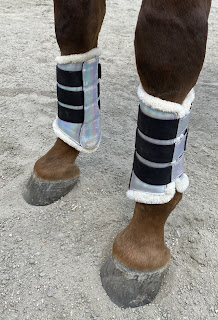 Holo boots complete the look, don't you think? Eros thinks so. And he's rarely wrong.
So that's what we're wearing today! Any favorites?
Posted by Stacie Seidman at 9:43 PM