This week was busy! Some days I kind of miss when we couldn't go places and do things... I mean, not really. But this week was a little too busy for my liking. Anyway... The horses both jumped on Wednesday as usual, and Mr. Eros got to jump a few 2'9" fences which has been super fun and exciting. He was perfect as expected and most importantly, sound afterward! 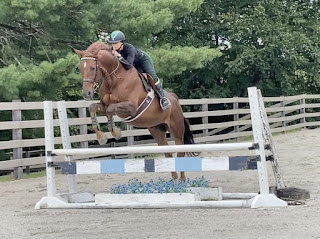 Shiny, on the other hand... I think she may be in heat. I've noticed when she's in season she gets tight feeling behind and is very reluctant to move forward at the canter. And we're in that phase at the moment. She also likes to speak out when I request that she move forward: 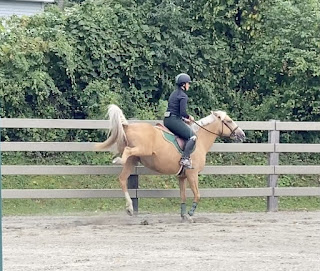 I did still jump her over a few fences, usually that helps to energize her. But I kept them low and didn't do very much. 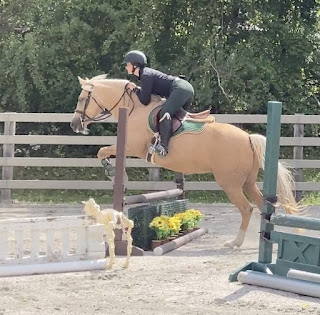 Thursday we were rained out. It was one of those days that I fully expected to ride at some point. Even put breeches on! But the couple of breaks in the rain were very short, and I just wasn't feeling getting wet that day. Sometimes we ride in the rain. Sometimes we don't. Since we didn't, I just flatted on Friday, and pushed the second jump day to Saturday.
I decided not to jump Shiny a second time this week. I don't think she was feeling it and clearly we had other things to work on anyway. But Eros? He definitely got to jump Saturday and he was SO PERFECT. I put most of the fences up to 2'9" and he just clocked around on the most perfect canter. I'm so proud of him. 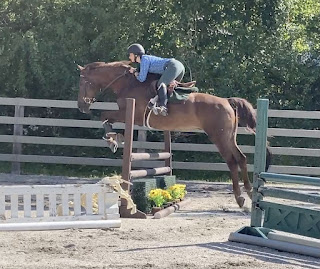 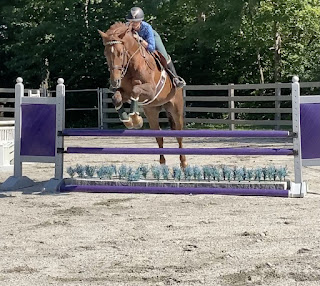 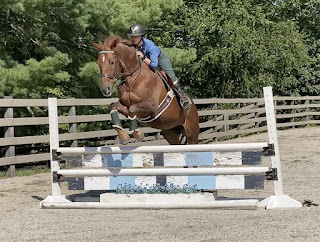 Of course, I have a little video too. I can't help it. It was so fun!

You may notice that the blue and white oxer is now a blue and white vertical. I've sadly lost another of my old wood standards. RIP standard! Hopefully next spring I'll get a few more jumps to replace all the ones that have rotted over the past few years.
Bellino was away at a show this past week, so I didn't get to lesson with him. Looks like he was pretty good though, he was reserve champion in the 2'9" hunters and was 10th in the 2'9" derby which was the first time he's done a class like that. Good boy!
In non horse news, I finally got my car through emissions after another stay at the mechanics, and nearly having to go do the dealer. What a nightmare! And the truck is squared away with new brakes and an oil change. I was feeling pretty good about that until the water guy came out to service my well and told me I needed a new pump. He quoted me way too much money so I called a local guy and got it done for half of that original quote. So glad I had all that braiding a few weeks ago, as it covered a most of the well issue.
I also had a horse to braid Saturday night. So nice to have a little income when life gets expensive! This was a new horse for me to braid, and is probably my favorite client now... His mane was SO easy and braided quickly. 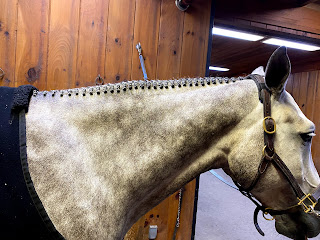 He is a bit of a tail rubber, so his tail was a little fuzzy looking, but he was a good boy for it at least. 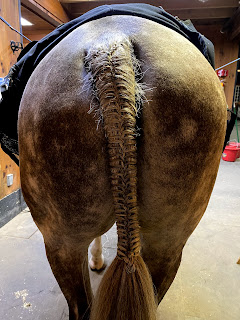 And his mom not only was there to keep my company while I braided, but she brought me a six back of hard seltzers. Not a bad gig!
Pammon was alone in his field for a few days last week as his buddy had some cuts on his legs that needed a little help healing. His two girl friends were in the field right next to him though, so don't feel like we left him all by himself! He doesn't really like his buddy that much anyway, and didn't seem to miss him at all. But his friend has returned this week, and I had fun hanging out with them both again. 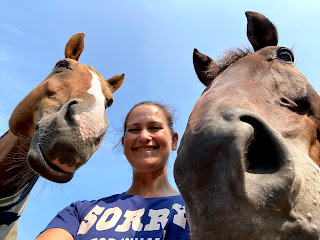 The weekend was pretty busy outside of the horses. I had dinner Friday with my family for Rosh Hashana (which was really late, as the holiday ended Wednesday, but we do what we do). Saturday, I spent the morning and early evening at the camp that shares my woods! My good friend used to work there when he was in college, and they were having a reunion there. It's the 100th anniversary for the camp this year, so it was a big celebration. I was hoping to climb the rock wall there, but didn't end up getting the chance since I had to leave for awhile to go ride. But it was a lot of fun anyway. I didn't attend camp as a kid since I was riding and showing back then, so it was fun to see what camp is all about! After sitting by the campfire and learning all of these silly camp songs, I went and braided the horse mentioned above.
Sunday I had to, unfortunately, attend a celebration of life. An old riding friend of mine sadly lost her husband to Covid complications. He contracted it before vaccinations were available, and while he did manage to survive the worst of it, months later his body couldn't fight anymore. It's so sad. When he was sick initially, he was intubated and in a coma for quite awhile. He came through that, and even was back home after re learning how to walk and do basic tasks. He was doing pretty well, until he wasn't. Only 48 years old. So very sad. My friend is doing well though. She's a very strong person. But I feel for her.
After attending that, to lighten the mood, I visited with Pammon, and then the house horses enjoyed Sunday funday. And I ordered pizza. It was a good day to binge eat pizza.
Monday was the day I got my car through emissions. I had to first stop at the mechanics to have him scan it for codes one more time to make sure it was going to go through. Then I headed straight over for the test and was SO excited when it passed! It's really been stressing me out. I do need a new car, as this one is starting to have lots of little problems (in between all the emissions repairs, it sprung a leak where the coolant goes. And it only sometimes is able to detect the key...). It's served me well for 11 years (and 172,000 miles) so it owes me nothing. But I was feeling like I might have to rush into the task of finding a new car, and now I feel like I can do that on my own time line.  Also, as an aside, why couldn't the car and the well pump crap out while I had a job? Sheesh. Anyway, once that was done, Pia came out and helped me set a new course. 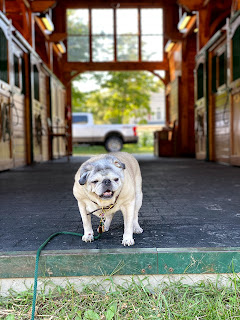 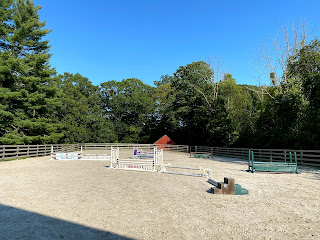 I'm excited to jump it today! And that's it from here. It was a busy week, and I'm glad this week so far is a little quieter. Did you have a good week and weekend? Do anything fun with the horses?