It's been kinda cold and snowy here. Not enough to interfere with horsing thankfully, but enough to be cold and annoying. 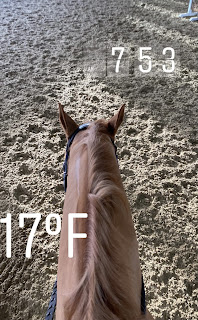 Barn Owner headed off to Florida early Sunday morning, so things are calm and quiet. We had a substitute teach our flat lesson last night, but only I showed up for it, so I got to have a private. Poor Pammon worked so hard, all he wanted to do this morning was stretchy trot. Literally. That's all he wanted. Canter? "Ugh, do I HAVE to???" I mean, he did canter, he's not Shiny, but the majority of this morning's (VERY COLD) ride was stretchy trot with his cute little nose down near his feet. Since we were on the cusp of too cold to ride, I agreed with him that it was a good plan for the day. We can work harder tomorrow. 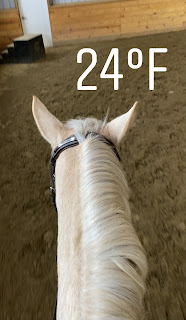 Shiny is kind of stuck in her ways right now, but we keep plugging along. I let her have a walk only ride on Sunday to see if that would help. I know in the summertime she enjoys her bareback Sundays, so I was hoping a walk only day might work the same way. I'm not sure if it helped or not for sure yet, but she did canter both directions yesterday. Since Pammon does the evening lesson Tuesday, I usually do Eros in the morning that day, but I chose Shiny instead yesterday. She seemed really confused as to why I was riding her so early. And then was even more confused in the evening when I didn't take her out. Apparently she likes routine as much as I do!
Nothing really to report on with Eros. He's is usual perfect self. He's been getting worked twice a week in the lunge rig (like the pessoa system) and while it seems to lighten him up a bit, I don't think it's really doing what it's supposed to behind. After he rigs, I feel like his back end is trailing out behind us. Odd. I really should get myself organized and bring the equiband out to the barn. I think he'd benefit from it. Shiny sure would if she would get moving forward!

I was pretty unproductive on the house cleaning front this weekend, but I did do some other stuff instead. Namely: I made Super Bowl snacks and labeled some stuff with my Cricut.

For snacks, I made strawberry cupcakes (from a mix, I'm not that motivated!) and the slow cooker contained buffalo chicken dip. I halved the recipe because it was just me enjoying it, and I think next time I'll do a touch less buffalo sauce and and a bit more ranch. It was my first time making it though, so that's how you learn! 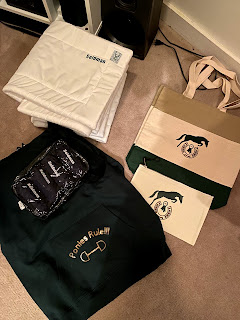 How great is that tote bag that came in my barn colors?! I found them on Walmart.com and they also had the boarding barn's colors. Unfortunately, I was out of blue vinyl, so I didn't get to decorate that one this weekend. Next week maybe. The hoodie says Ponies Rule on the pocket and has my logo on the back. Possibly one of my new favorite things.
And that's really about it from here this week. How are things by you? Cold? Snowy? Rainy? Have any delicious Super Bowl snacks?
Posted by Stacie Seidman at 10:44 AM