Thursday's Threads: Holo edition (I took it too far.)

OUTFIT DAY! Guys. I got a little more extra than normal this week. MAYBE a little too much... Whatever, it's fun, and I ride in my backyard. Also, holo is awesome and all, but you have no idea how awesome until you use it at night. Seriously. Anyway, I'll start with the ponies this week. 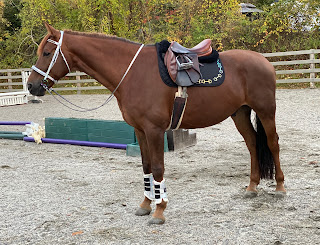 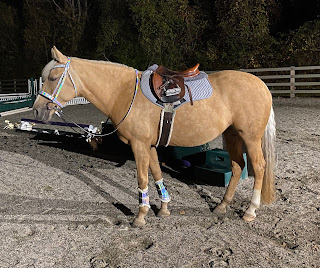 Yeah.... the bridles are definitely extra. For sure not for everyday use. But still... Fully awesome. Especially at night. 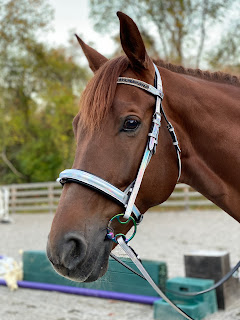 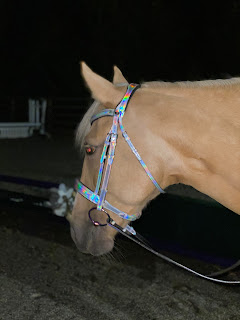 Are these top quality buttery soft bridles? Nope. Of course not. But they are shiny and super fun. My only real complaint is that the noseband buckles are on the wrong side. Not a big deal, but kind of weird. 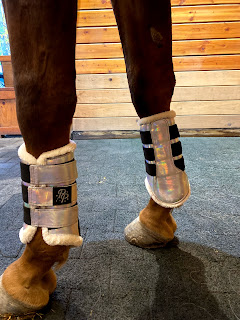 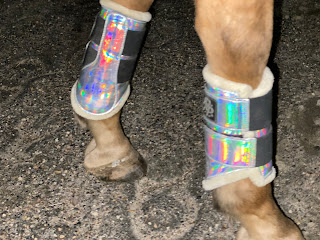 DO YOU SEE THAT HOLO AMAZINGNESS ON SHINY?! Do you?? Seriously. This stuff was made for night rides. I had no idea. 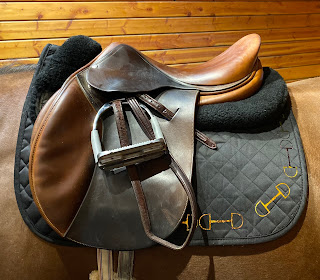 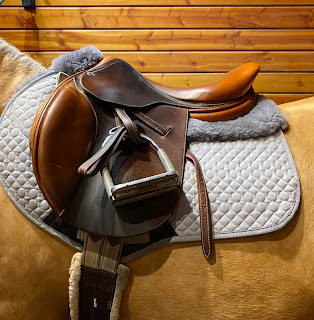 My friend that borrowed my saddle was really thoughtful and cleaned and conditioned it. But it's kinda gross and sticky now (I'm sure will come clean when I actually clean it) so forgive its weird appearance. I used the Cricut to decorate Eros' baby pad, and I love how it came out! I did one with rose gold bits too which you'll see soon. This one has holo bits which are a little difficult to photograph, but they for sure match the rest of the outfit. Trust me. I DO have holo stirrups too, but I've decided I'm far too lazy and particular to be switching those around. So these are plain.

That's what the tall kids wore... but here's what I wore: 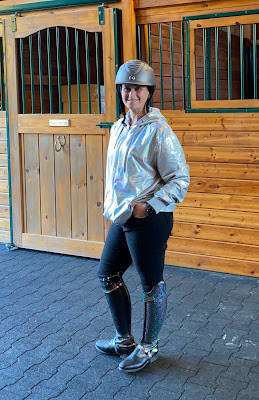 Yassss.... Holo sweatshirt!!! I'm dying a little waiting for my holo helmet. It won't be here for like a million years. (Or like five more weeks, same thing.) But seriously. You think we were extra today... wait till that gets added to the mix! 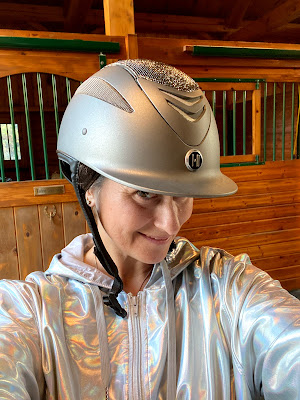 I mean, this one is totally doing a stand up job here. It's more or less the right color, and it has plenty of shininess. BUT, it's not holo.
Sweatshirt: HDE 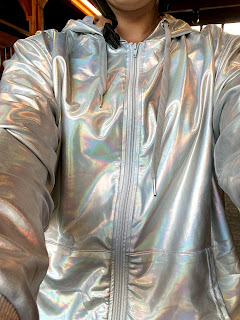 I totally ordered the wrong size on this. I thought it was fine though until I actually wore it and missed the return window. It's cool though, I have the appropriate size on the way. And maybe I'll sell this one if anyone's looking. It's a large cause I evidently don't check my orders. Oops.

I don't normally spend money like these TS belts cost, but I had been hunting for a holo belt FOREVER. When this one popped up at Jods, I had to have it. I really like the Jods lady though, so I justified it by telling myself I was supporting a small, woman owned business. They didn't actually have my size, but these are cut to size anyway. She cut it down for me, AND emailed me to let me know in case I didn't want that. Which I think is nice service.

Breeches: Some rando generic brand black pants, decorated by me 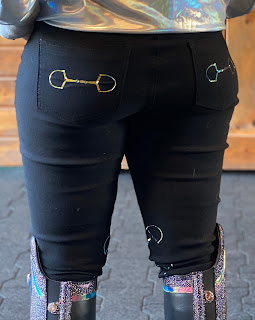 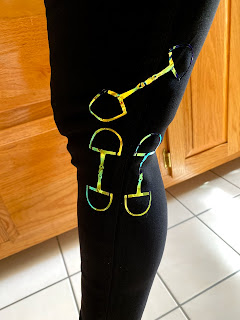 So the iron on I used for these wasn't really the right one because it doesn't stretch. So the bits broke a little when I put them on, and I'm not sure they'll really last too many rides. But whatever. I can always redo them with the correct material down the road. I think they came out kinda cute! 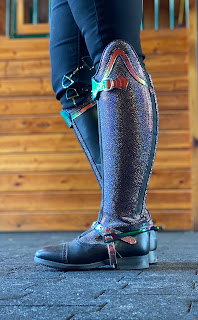 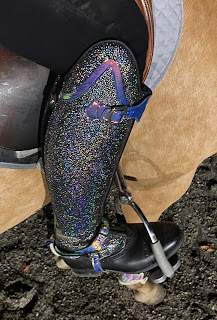 I mean. I already loved these boots. But then I wore them in the dark, and they are AMAZING. Look at them! Ah! Celeris is releasing something awesome Friday (I can't say what yet...) and I want that thing to match these. (And the cow boots...) 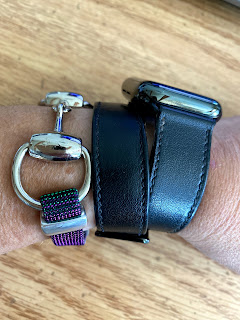 Lefty is donning a bit bracelet that I made along with the apple watch.
Righty: 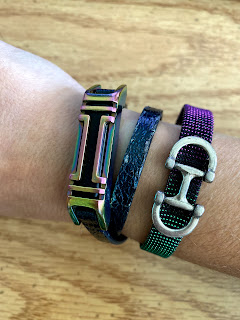 Righty is donning a different bit bracelet that I made along with the Fitbit in a Tory Burch holder. The leather on that one is about spent though, so I think I will replace that soon.

And that's it for this week! For sure it's extra, even for me... But it was so fun to put together! And discovering how much more awesome the holo is at night was a total bonus. Any favorites?