I don't really have anything to confess today... I haven't embarrassed myself royally in the past week. Nor bought anything too ridiculous even... Shocking I know!

So I guess today I'll talk about the saddle hole I've fallen down...

As you may recall, I bought a used Butet for a temporary saddle. 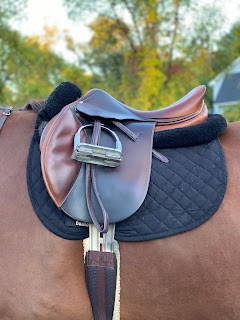 It's nearly perfect... The seat may be a touch big though, and the flaps are super long (15"! Guys, I'm  5'2"...) . It has a 4.5" tree which is maybe a little wide for my two horses, but not bad. I like to ride with a sheepskin half pad anyway, and that seems to be working. Eros has been using this saddle. Pammon is still going in my old Hermes with the teeny tiny 3.5" tree (but it is a spring tree, so it's not actually that tiny. That one isn't the worst for him but he would probably appreciate a bit more room.

Well. I have found what I'm hoping will be my actual new saddle. It's the Hermes saddle I've been wanting. AND I found a used one that's not terribly used. For just about half of what a new one would be. It arrives Thursday for a trial. It has a 4" tree and exactly the flap dimensions I need. 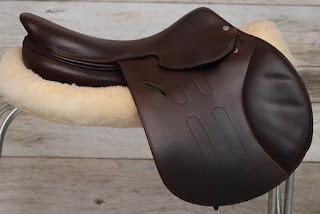 I'm hoping the 4" won't be too narrow. Despite Eros' large belly, he's not broad up top. The Voltaire was for sure too wide for him. He and Pammon are actually somewhat similar in shape. Pammon is currently a bit lacking in the topline area though (not surprising). Anyway, if it can work for one of them, the Butet can work for the other. I'm kind of wanting to keep the Hermes home with me... I don't really want anyone touching my new baby. Since Pammon is on full care, he gets tacked up for me. Talk about a first world problem...
Assuming this saddle works, I then need to deal with the Butet. Ideally, both horses would be in one place and I could have just one saddle for the both of them. BUT they don't live in the same place all the time, so I probably will need to have two. I'm not shelling out for two of these. My money tree doesn't bloom that generously! Plus, I haven't seen another in the right size used. While the Butet I have is close to what we need, it isn't perfect. So my plan is to keep my eyeballs open for the exact one I do want. Hopefully it won't turn up for awhile though... Ha! And then sell this one that's not quite perfect.
A friend of mine has a premium Butet with a flap that's closer to what I need (though a hair too forward I think) but it has a flatter seat. I really prefer the deep seat. Anyway, hers doesn't fit her new horse so she asked to borrow mine for a hunter pace last weekend. I said sure if she let me try hers out. It has a 4" tree so I figured that would be nice to look at ahead of the new one coming.
Good news was it fit Eros really well. So I'm hopeful for the Hermes.
I really thought I wanted a Butet premium more than the one I have... But after riding in hers I'm not so sure. I didn't really like it, and I think it had me leaning forward a little more than usual. Might have just been the flatter seat though.
So friend's saddle is a 17.25 L seat (semi flat) with a 2.5 flap (regular, forward), 4" tree. Mine is a 17.5 C seat (deep) with a 2L flap (long, straight), 4.5" tree. I think what I want is a 17" C seat (but 17.5 could work) and a 2 flap and either a 4" or 4.25" tree. So... if you see one for under $2000 hit me up.
So that's my saddle story. Fingers crossed the new one makes my butt sing! And then re cross them that I can shuffle Butets around to get what we want. I know you all have had super interesting saddle adventures, so if any of you know of places to look, let me know in the comments! (I've been keeping an eye on Redwood Tack, Double Oak Tack, High Line Tack, Facebook, and Ebay.)

Posted by Stacie Seidman at 3:39 PM