Today I am confessing that I was horribly wrong...

For awhile now (at least a couple of years), I've been convinced I wanted the Hermes Cavalle saddle. I was CERTAIN! I mean, it's beautiful. It appears to have the same balance as the very old Essentielle I'm still stuffing my bum into. And I mean... it's Hermes. What's not to want? Well. I FINALLY found a used one to try. It arrived Thursday literally as I was tacking Eros up. 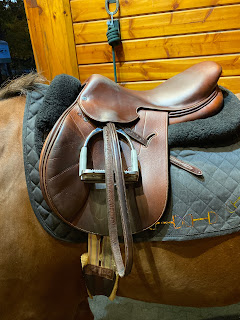 I mean, look at it. It's art. So pretty. So soft. But. (You knew a but was coming.) It was a bit too narrow for Eros. I made him try it anyway because it wasn't terrible, and I figured if I still liked it, it would probably work for Pammon since he's a little more narrow.
So I get on. And it fit me very well. But (yeah another one), it didn't make my butt sing. Well. That's not true. My butt liked it well enough. Like a happy humming, as opposed to a full on ecstatic song. I just didn't get that secure feeling I have in my other one and in the Butet's. Like there wasn't anything especially wrong with the fit, but I felt a little like I was sitting on top of it instead of in it. If that makes sense. So, with a strong feeling of disappointment I packed up this beauty and sent her back. The good news is the same shop has a Butet for me to try instead. And even better it's about half the cost of this one. So saving money is always nice.

I have one other confession today too... Pre pandemic, I used to stop for McDonalds at least once a week for lunch. It was the only food place on my drive between home and work. And I do like crappy food now and then. But I haven't been since lockdown happened. There isn't one near where I live and who drives out of their way for McDonald's? Not this girl. (Though Taco Bell is a different story... Haven't had that either though!) But um... I'm not sure how it happened. At some point I re-discovered the frozen White Castle cheeseburgers you can get at the grocery store. And I've been eating them occasionally. They are delicious! Terrible for me, surely. But so good. So yeah. That's confession #2.