We had some weather woes last week and the home ponies all got a bonus day off. Then Eros had Friday off too. Well. Sort of. I got on and the guy who lives on the other side of the woods from me was playing with his antique tractor... Normally not too big of an issue, but it kept backfiring, and Eros just could not. It was getting dark out, and I feel like some days you choose your battles. Shiny gives zero effs about such things though, so she DID get worked Friday.

The inconsistency during the week lead to somewhat interesting rides on Saturday. It was really windy, but otherwise a nice enough day. But you guys. Both horses were a little bonkers. Eros wound up spending our entire ride on basically a 20 meter circle. It was a LONG 40 minutes.

Shiny's version of bonkers is very different from Eros. She doesn't do anything too crazy. Usually... she did run away after popping over an x one time...

Nope, Shiny doesn't usually get wild. Instead she gets rude. She was inconsistent in the contact, behind the leg, and just generally doing what she wanted. On more than one occasion I asked her to circle and got no response.
I realized trying to have a jump school with that particular pony on that day was pointless. Instead we just kept working at reinstalling the correct buttons. She finished up well enough at least. Sunday, she was still a little... opinionated.
So instead of jumping courses or working through the grid, we continued our flatwork session from the day before. But this time I would throw jumps in as we were going. So we'd flat for awhile, working on different things, then pop over a jump and go back to whatever we were working on. 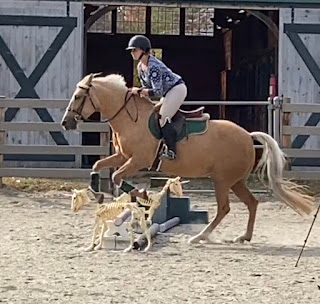 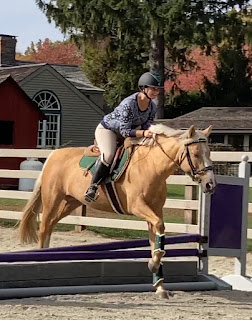 Pammon is doing about the same. We're getting him weaned off the ace which is nice. I'm hoping once I can ride him safely without it, maybe he'll give me a little more and start feeling less... blah. Time will tell I suppose.
In other news, I dropped off my ballot over the weekend, so I have officially voted! Feels good to have that done. I was planning to vote in person, but in my small town, I feel confident that nothing will happen to my absentee ballot. The drop box is right at the town hall, so the USPS doesn't have to handle it. 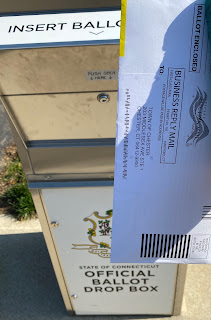 I also walked a 5K on Sunday. There are a handful of races I normally run every year in October (despite the fact that I run almost never the rest of the year...) and I wanted to keep that tradition going. 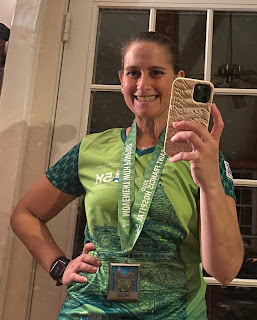 They have all offered a virtual option this year, so I registered and am picking away at them. Even if the first one I walked instead of running... I still wound up with shin splints! Ha. #outofshape
Hopefully you're still with me at this point, because I wanted to point out that I added a "Stuff for Sale" tab to my home page here on the blog. Currently it only has breeches on it, but I'll slowly be adding other stuff as I get around to taking photos. So if you're looking for some schooling breeches and you wear size 28 or 30, check out my new tab! If you're interested in anything, just comment on that page, or feel free to message me either on Facebook, Instagram, or my email.
I hope you all had a good week/weekend! Do anything fun?
Posted by Stacie Seidman at 10:21 AM