Outfits will be a lot more tame once I move over to the boarding barn for the winter. So I figured I should go all out for this one. And guys... I really outdid myself here. DEFINITELY went too far. And I have zero regrets. 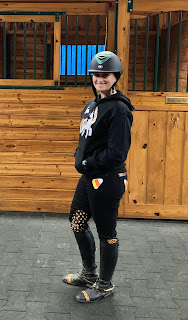 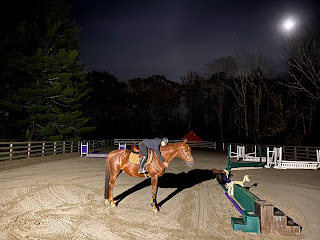 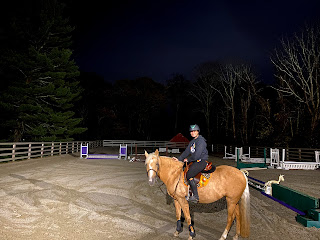 The photos with the horses really didn't come out very well. It was just too dark out. But that one with Eros is kind of amazing with the moon, isn't it? Let's start with their outfits today. 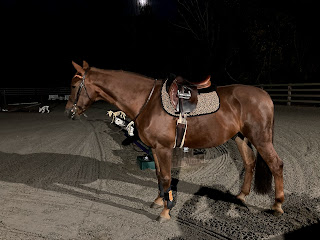 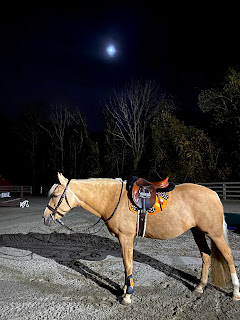 I know. We've done candy corn a few times now. But listen. I own all this candy corn crap so you'll probably see it again next year too! But also... I definitely added a lot to previous outfits.
Saddles: Butet for both
Pads: I can't remember who made these... sorry! 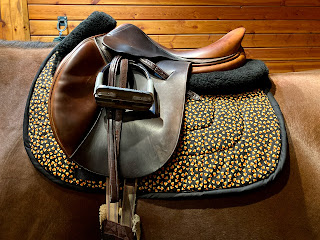 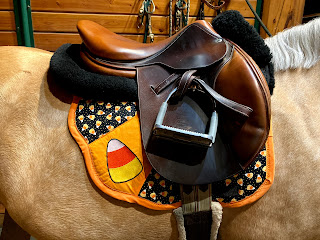 That pad on Shiny wound up being kind of a nightmare. First off, it didn't arrive when it was supposed to back when I bought it, so I ordered the one on Eros as well. It arrived immediately. Eventually, this one on Shiny did show up. But it's kind of small and dressage cut so it doesn't really fit any saddles. (The one I ordered was not dressage cut...) I figured I'd try it for Shiny and it was okay. Think I'll try and sell it though if anyone is interested. 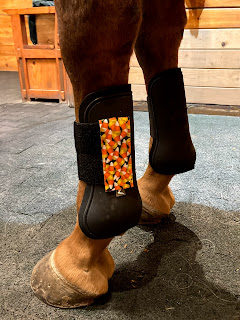 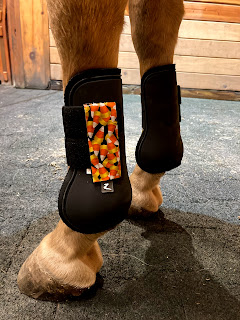 Finding duct tape that matched my saddle pad was one of the highlights of my life. Wait till you see what else I did with it...
Bridles: M. Toulouse
Browbands: homemade
Bonnets: Etsy 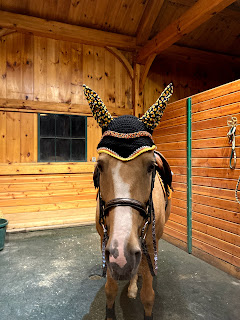 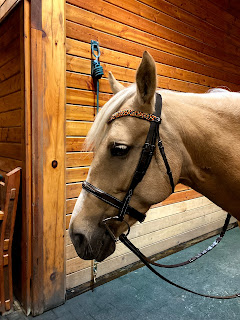 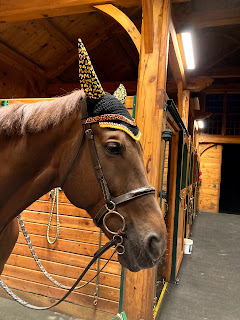 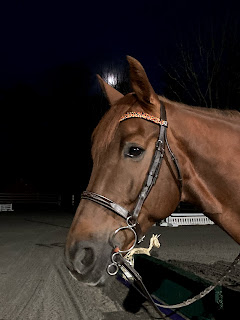 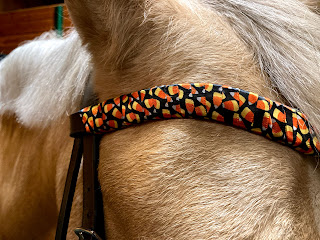 I was planning to sell these bridles because I didn't like them that much... but now I've decided to keep them for dress up. As for the browbands, I took the ones I hated from the La Cense sidepulls and wrapped them in candy corn ribbon. So I'm glad I found a purpose for them! And also why you'll be seeing candy corn for years to come. Gotta use this stuff! I made the horses take photos with the bonnets, but they both seemed pretty annoyed by them so I took them off to ride. Cute though, right?!
Okay my turn! 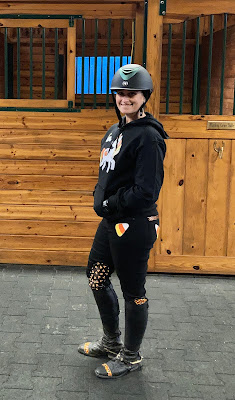 Hahahahaha! Told ya. I overdid it.
Helmet: One K MIPS 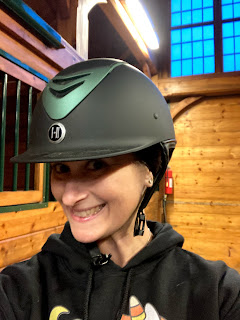 I can't bring myself to deface a helmet, so I left this one alone. I had time deciding which to wear. Finally, since none really matched I just went with the safest one.
Sweatshirt: Teepublic 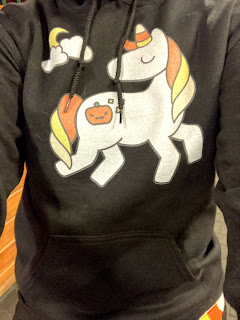 Yeah. I fell victim to a targeted Facebook ad. It happens. I'm getting big time Shiny vibes from that pony, what can I say?
Belt: C4 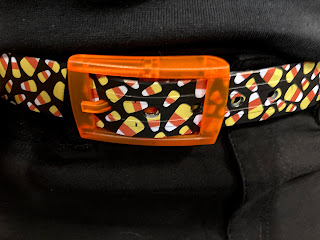 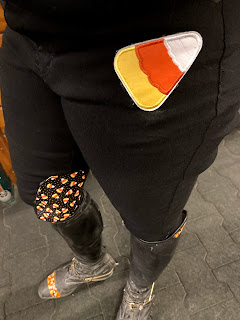 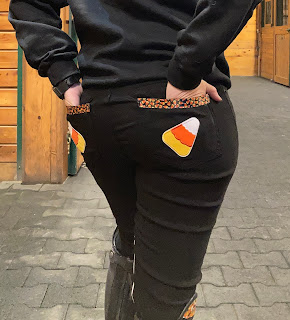 I took a cheapo pair of black pants and then went all 8 year old on them. So I found some printed vinyl that matched all my stuff. Cut it into knee patch shapes and used stretch fabric glue to stick them on. (Who wants to sew? Not me.) Then I glued on the candy corn patches and took the ribbon that was left over from the browbands to trim the back pockets. I figured they'd be toast by the time I finished riding both horses, but they're still completely in tact. We'll see how they make out in the washer and dryer though... figure that might be the end of them. If not? You'll see them again next year. Ha!
Socks: Dreamers and Schemers
Sneakers: HJSHG 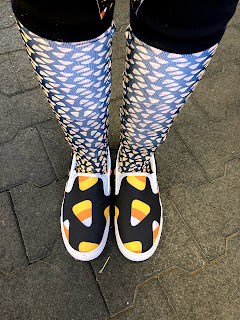 Um. Yeah. I definitely did also get the matching mask. But since I was home I didn't use it yet. Maybe when I ride Pammon on Halloween! 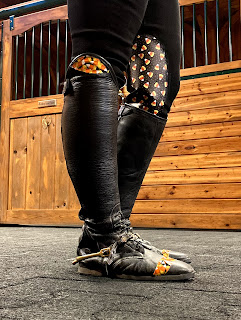 I did not intend to deface any boots for this outfit... But then I saw this pair of Regals that are pretty close to the end of their days anyway... So I did it. NO REGRETS my friends! Plus it's just duct tape. I can remove it. I think they're kind cute this way though. Maybe should have done the toe part thinner?

Crop: Another relic laying around the barn 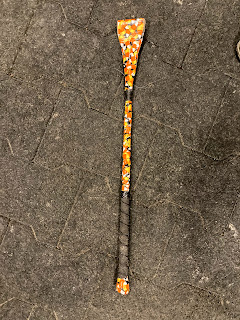 Someone should probably revoke my duct tape privileges. But seriously! Look at that! Hahahaha! I love it. 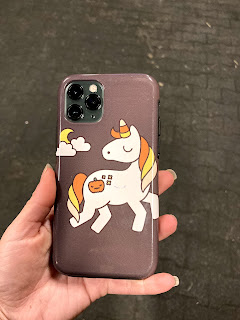 What? It matched the hoodie! I needed it. 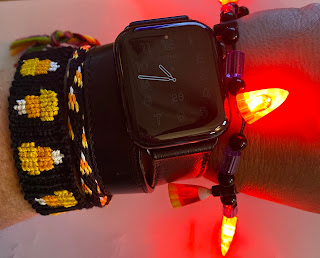 I know you're surprised I don't have the apple watch band to match... Probably next year. For now, I 'm wearing these string bracelets from Etsy and that light up one from I'm not sure where. Admittedly, the light up one came off after photos. It was pretty annoying. 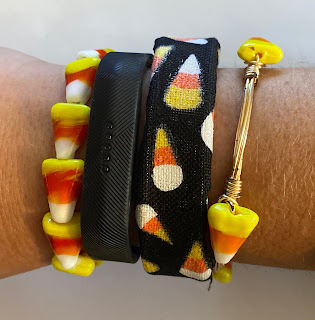 Righty has on a stretch bracelet, the Fitbit, a fabric cuff that I made, and this adorable wire bangle I found on Etsy.

And that's it! Not sure how I'll top this next year if I keep with the candy corn theme.... But I'm sure I'll come up with something.