I mentioned yesterday it was a quiet riding week. So we didn't have a schooling session or work particularly hard. But we did ride all six days (all three horses) so it wasn't a total slack fest. I had a busy Saturday too. It's funny, after being in corona lock down for so long, what constitutes busy is nothing like what busy used to be...

There was a Covid exposure at my dogs' vet office, so they are closed for two weeks. But I needed refills on Artie's meds. Fortunately, my local office is part of a larger network, so I was able to pick up his meds at the vet hospital. It's a little farther away, but I was just glad to be able to get them! That was my first errand Saturday morning. I was up there at 8 am to get them and then get them into Artie. Next stop was to ride Pammon. I took him outside for the first time in awhile and he was exactly the same as inside. So I guess that's good? Next stop was for my flu shot. My town partnered with a local health service to provide a drive through flu shot clinic at the high school. They gave us appointments to keep lines to a minimum. I arrived just as a car ahead of me was finishing up. Very organized, quick, and easy!

Then it was back home. I had to fix a fence rail that Shiny had kicked out a few weeks ago. I had to order screws hence the delay. That was easy enough: 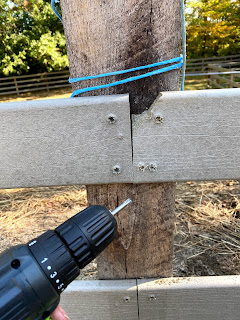 Yeah the board has a chip in it, but it's cosmetic. I'm leaving it!
Next task was to build my Halloween "jump". I use quotes because it's more like a cavalletti than a jump. Whatevs, it's cute! 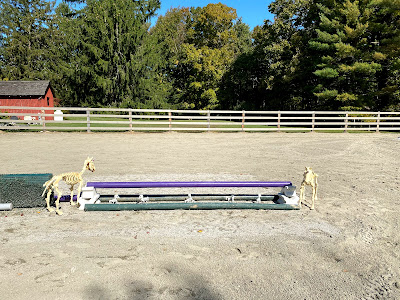 Both horses were absolutely petrified when I brought them out to ride. But once I led them over to the unicorns and they watched me pet them, they both were over it pretty quickly. Eros has decided they are actually there for him to play with now. I keep finding them after his turnout in positions like this: 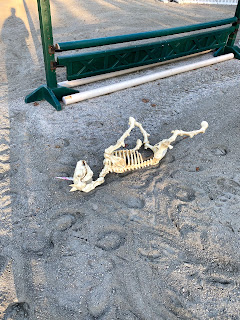 They seem to be fairly rugged so far at least. I did pop Shiny over it even though we didn't do a real jump school. I couldn't resist. But I wasn't as fair to her as I should have been (hindsight and all that...). I didn't jump anything first and just went right to this new one. She stopped at it the first time, but it was the strangest stop. I figured she could walk over it, so when she broke from trot, I just kept my leg on and asked her to keep going. But she kind of tripped on it and wound up like this: 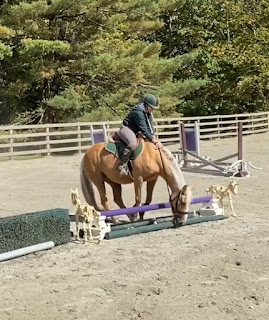 Oops. She went right over on the second attempt though with no further issues.
I think I just surprised her. She got shots on Wednesday and was for sure pretty sore in her neck the rest of the week. I'm guessing that didn't help either. Poor nugget.
My final thing to do Saturday was get my hair cut... not like a real cut though. No... I let my stepmom cut it. She has no formal training... but she cuts my dad's hair. And her dog's. So I figured why not. It came out just fine!
And that really is about the extent of last week. Lol! Horses are back in their program this week, so hopefully we'll have more media soon. Did you all have a good week/weekend? Do anything fun? Get a hair cut?
Posted by Stacie Seidman at 12:02 PM