We already touched on the big stupid news happening around here, but there were other things that happened in the past week, so I'll fill you all in!
I had a half day on Friday because the horses were getting their fall shots and boosters for EEE. There's a bit of an outbreak happening in my area. So far all of the affected horses were not vaccinated, but better safe. Especially with Rio since his immune system isn't up to snuff. I had hoped the vet would be there on the earlier side of the window so I might have time to ride Eros too, but these things rarely work out that way. It was ok though. I still had time to ride the ones at home, and was able to do a couple of things I've been putting off while I waited. So still a win! Even if I had to make up four hours of work since no one filled in for me... But I digress...
Saturday was kind of a weird day schedule wise. I had a wedding to attend at 2 pm, so that limited my horsing time quite a bit. I opted to give the horses at home the day off, and just head over to ride Eros. I was excited to see how he felt after his injections. My stepmom rode him all week, so it was my first time since that all got done. He felt FANTASTIC. 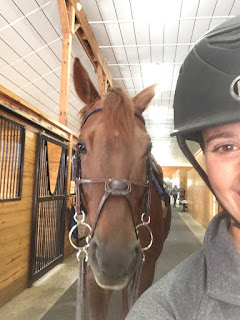 He had some body work done yesterday and that vet was worried that he has ulcers so we're going to treat him. Kind of surprising to me as he's an actual vacuum cleaner with probably the easiest life ever. But hey, these things can happen. He has been a little cranky lately, so that would explain that behavior. I'm sure he'll be feeling better asap.

The wedding was at a venue just 5 miles from my farm. It's actually a town owned park, and so beautiful for a wedding! The extra nice thing about it being so close and outdoors, was that the bride was able to include her horse and dog in the wedding party! In fact... they were the wedding party! 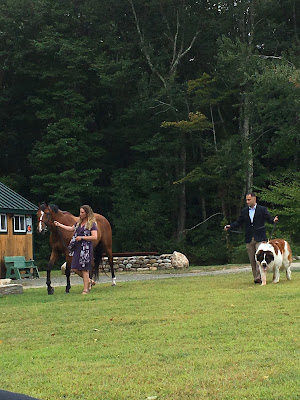 You may recognize the horse. I got to flat him once (maybe twice?) last winter. His name is Rodeo, and he's a jumper. 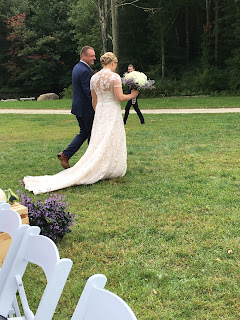 I figured since the wedding started at 2 it would all be over by 6 or 7 so I didn't call the horse sitter to feed. You guys, the party just kept going! I finally left at 7:30 because I figured the horses would be tearing the barn down. They were actually pretty content when I got there. But I felt bad for being late. It was a great time though. And nice to be home fairly early for the night! (I'm so old.)

Sunday is normally my lesson day, but the assistant trainer was getting married that day and barn owner/head trainer was in the wedding party. So no one there to teach. That was fine though. It was a BEAUTIFUL day, so I had a nice flat on Eros, and took a little walk on him after. I rode Pammon and Shiny after, both lightly. Pammon was a spooky pumpkin the whole ride, but nobody died so that was nice. Shiny was pretty sore. She needed the most vaccinations on Friday and her little pony body wasn't too happy about getting them. Maybe next time I'll ask about giving her a little banamine after shots. She's doing better now though, not to worry!

Monday the lameness vet came out for Pammon. It was kind of funny, Pammon was already out on the crossties but doc went right to visit with Rio first. Doc hasn't been out in awhile since I didn't have anything in work for so long, and I think he's missed Rio. I had this vet go over the pre-purchase before I bought him (he was vetted in Holland), so that's how long they've known each other. This vet helped get us through a lot over the years between his torn SI, his 3 suspensory injuries, and eventually the epm too. (Rio was a bit accident prone.) Anyway, doc said he looks great which was nice to hear. (I agree.)
I had to go back to work for a couple hours after the appointment, but was home early enough to ride Shiny and hand walk Pammon. In the dark.
He wasn't so sure about the shadows and dogs barking in the distance, but he held it together. Last night everyone stayed in because I had a family dinner I needed to attend.

And for the saddest thing you'll read all day... I actually got myself up and went running yesterday morning. I figure if Pammon is out of commission I should still do my part to stay fit. To be honest, the run actually felt pretty great. I was shocked because I hate running and it's always hard for me. Maybe it was easier because I let myself go slow as a turtle and I didn't go that far. But whatever the reason, it was encouraging that I didn't feel like dying the entire time. 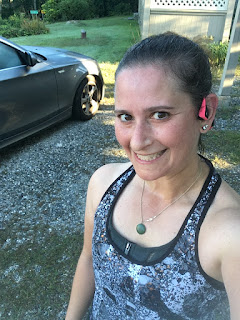 I'm hoping I can make myself stick with it a few days a week. We'll see how it goes. I have a few 5K races I run participate in every year coming up, so it might be nice to actually feel trained for them. Maybe I can dip back down closer to my old running times. Ha. Probably not.

How was your week? Did you get much riding in? Any EEE scares in your area? How do you stay fit when you're not able to ride as much?
Posted by Stacie Seidman at 4:08 PM