The weeks are somehow flying by and also really long somehow. Time is a funny thing, isn't it? I'm pretty sad that summer is ending though. Boo. That said, it was still nice to have a three day weekend. And it was BUSY!

So Eros felt... not great when I rode him last Thursday. His feet get kind of brittle this time of year, so my farrier lets his toe get a little long to give him someplace to nail. But when his toe gets long that ankle of his gets sore and it's kind of a vicious cycle. He's on the list to see the vet anyway though, as I think he needs some maintenance. Body worker is coming soon too, yay! Hopefully we'll get him all patched up and ready to roll in the next few weeks.
Friday turned out to be one of those days where nothing goes how you thought it would. I was supposed to have a 6:15 lesson after work, but trainer forgot. So I wasted a lot of time waiting for her, before I finally sent a text. It wasn't a big deal, but the day got late by the time I finally got on. I wound up just riding Pammon and giving Shiny and Rio quick grooms and extra cookies.

Saturday some friends and I had tickets to see the Yankees play an afternoon game. I had figured we'd leave around 10 am giving plenty of time to flat Eros before we left. I wanted to see how he felt so I could decide about my lesson on Sunday. But you all know how best laid plans go, yes?
My friends wanted to be on the 7:20 AM train to the stadium. It was a giveaway day, but only to the first 20,000 people. Last time we missed out. So they wanted to arrive early. UGH. I couldn't not ride in the morning though. Firstly because I wanted to see if he was sound. But also, if he WAS sound, he needed to get ridden the day before he jumps, and stepmom was out of town for the weekend. So I asked if it would be okay if I came out stupid early to ride. That is one of the super nice things about the boarding barn. They seem to be pretty flexible about stuff like that. I got the okay, so Saturday morning I was up at 3:30 am to go ride.
Know how early that is? 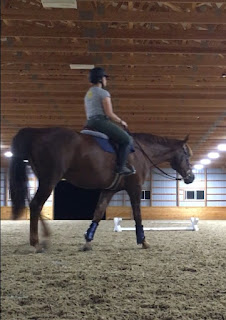 It's so early I rode and put him away before the sun was up. He's been spending his nights outside, so I had to go find him via iphone flashlight in the paddock. Lol. Good thing they go out individually and I didn't have to herd him away from any buddies! I knew they'd be getting there to bring in and feed soon after I left, so I tucked him back in his stall when I was done riding.
Anyway, he felt better for this ride, so I decided to keep the lesson. I had tried to video some with my phone so I could see what he looked like, but I turned it the wrong way and you really couldn't see much. Oops. It was a good thought anyway.
The sun finally started coming up when I was leaving, and it was a really beautiful sunrise. There are benefits to early mornings! 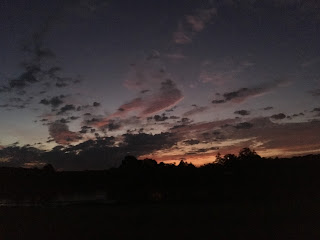 Next I headed home to grab a shower and let the dogs out. Did that, fed the horses and got their meals ready for the rest of the day for the horse sitter. And I was ready to leave by 6:30 am! Seriously, someone should have rewarded me for that. I was impressed with me! 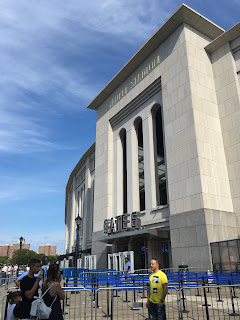 We were there super early (as planned I guess) and had to stand in line forever. But we got our free shirts (seriously, not so sure they were worth a 3:15 am wake up, but I hate to be the stick in the mud) and we walked around for a bit before having some lunch. Loved these giant bobble heads: 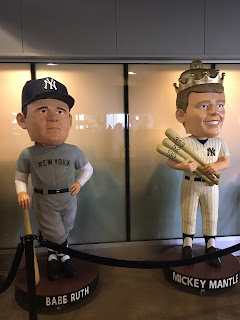 The game was really fun! It was a close one the whole way through, and the Yankees pulled off a win in extra innings. (Yep, it was a LONG game!) 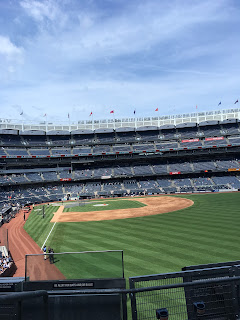 I was pretty excited when I finally got home to snuggle the pugs for awhile and get to bed early. Even though most of the day was spent sitting on my butt eating snacks and watching baseball, I was exhausted!

Sunday morning I was somewhat refreshed since I had gone to bed early. I was at the barn by 9 for my 9:30 lesson. Unfortunately, as we were warming up, I could tell Eros was feeling sore again, so I wound up just spectating. I was disappointed to miss out on jumping after last weeks lesson had gone so well. But that's horses! It was still fun to watch my friends jump around.

I got to ride my buddy Vino on Sunday too. Last time I rode him was that stupid hot weekend when we hid in the indoor to stay cooler. So this time it was nice to get outside with him. He was less lazy than indoors which was lovely.
And then it was home for more riding and some hand grazing. I had some interesting rides... Pammon was a little fresh. And the people on the other side of the woods from us must have been doing some yard work. At one point a branch or something fell and I got a little run away with. I decided when he continued to spook at nothing that I should throw him on a lunge line. Glad I did! He was WILD. Galloping and bucking for a full twenty minutes. I eventually got back on and tried to end on a good note, but he never fully settled. I could tell he was physically tired, but the hamsters must have still been spinning that wheel. Sometimes you just have to know when to finish and come back and try again.
He still got to have some snacks in the yard. He was never truly bad (he's not a bad guy, ever) but he just was angsty and unfocused. We all have those days.
Shiny has been a little cranky lately. I'm guessing she's in season? I don't know. Mares! She hasn't been terrible by any means, just has lots of opinions she enjoys sharing with me. She got snacks too though. 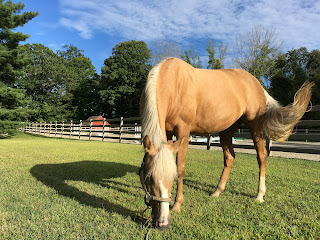 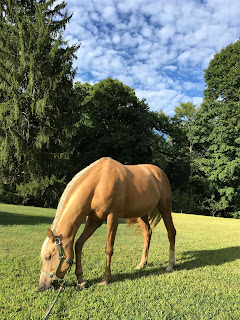 Rio skipped right to the snacks after a good grooming. 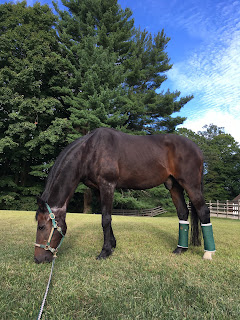 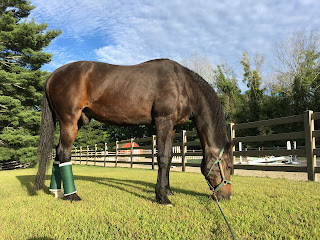 I got done just in time to make it to the lake for the last concert of the season (waaahhhhh)! 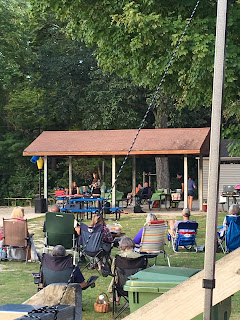 Fortunately, they will be open a few more weeks so I still have some more lobster rolls to consume. 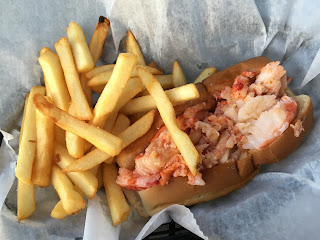 Thank goodness. I'm not ready to give these up.

Monday was another early morning since my helper had the day off. I had to be done with chores by 12:30 ish because my lesson was rescheduled for around that time. The kids all enjoyed their turnouts and took turns between the walkouts and the ring.

It was a lovely morning! And my lesson went well too for the most part. I wrote about it yesterday already, so just flip back a page to catch up! In summary, I still suffer from #ammyangst (maybe I just made some shirts with that on them over at tee spring) but we're working through it!
Shiny's ride was delayed a few minutes as we waited for a rain shower to pass, but once we got out there she was pretty good. Not as grumpy as she has been, but still just a bit. Once she warmed up though, she was more willing to do some work. Maybe the weather changes are hard on her. I dunno. Ponies...
I got done with everyone just in time to feed dinner and then hunt some down for myself (grocery store subs for the win!). I honestly don't know where the hours go. The barn vortex is a real thing you guys!
Next thing I knew, I was back in the office. Sheesh. Work has settled down for now as they decided to postpone some of these awful changes that are coming. So it will get awful again come the first of the year, but for now life is more or less back to normal. I'm not sure if delaying the inevitable is really better, but I'll take it for the time being.
The horses have been good so far this week. It's supposed to storm pretty hard this evening, so I'll probably go sit on Eros and see how he feels. My luck he'll be perfectly fine by Friday for the vet... Lol. Hopefully not. I mean, I want him sound, but I want to fix what's wrong too!
That's about it from here... The only other thing I did last week was fix the broken fence post with Gorilla Glue and duct tape. So far it's holding! 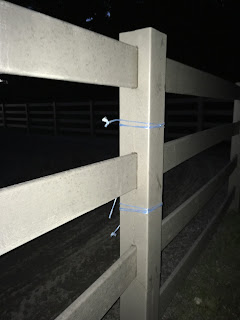 How was your week/weekend? Do anything fun for the holiday? Go to some shows or lessons? Tell me about it in the comments!

Posted by Stacie Seidman at 3:37 PM