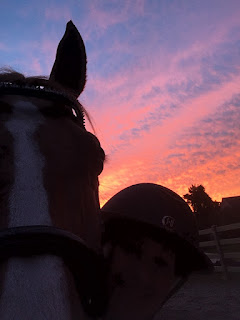 L over at Viva Carlos had some fun questions on her blog today, and I'm playing along! 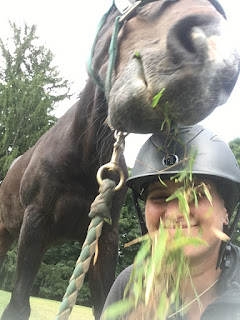 1. Favorite quirk your horse (or a horse you’ve spent time with) has?
-Rio is delightfully extra quirky ever since his EPM diagnosis. I think my favorite quirk is the giant wads of hay he likes to spit at me. But sometimes it's loose grass too... (see above photo)
-Pammon likes to put his hay in a bucket to eat. I thought at first that he was just a dunker, but I've noticed he'll also use his feed tub. So I'm not sure he cares that the hay gets wet.
-Shiny likes to get poop in her mane. (So gross.)
-Eros... well he's pretty normal really.
-Fefe hates other horses. Like HATES them. All the time.


3. Plan your next ride. What will you do/work on?
-Pammon: we're on the light hack route until the vet comes Monday
-Shiny: hoping for another jump school this weekend! But our next ride will just be a flat in the dark probably.
-Eros: can't wait to test out the newly oiled joints! We'll do some flatwork for our next ride, and then maybe some cavalletti work this weekend. (No lessons this weekend, boo.)

4. Have you ever trained an OTTB? If yes, what was the biggest challenge?
I have, quite a few in the past! The most recent was Romey, but we didn't really get very far. Turns out he once broke his leg, and had a permanent hitch in his git-along... So that was his biggest challenge for sure. Generally though, I think it's just getting their brain to slow down. Once they start thinking more slowly, the rest falls into place.

5. Have you ever groomed or worked for a professional rider?
I was a groom the summer after college, and the school year after college I was a stable manager at a farm with 65 horses. 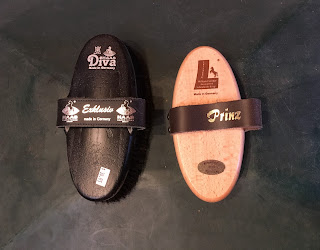 6. Favorite horse and rider combination?
I'm going to throw this one way back to Ian Millar and Big Ben. They were such an amazing team, and won just about everywhere.


7. Have you ever ridden a horse at the beach?
I have not, but would love to one day! There are a few beaches around here you can ride at in the off season. I feel like Shiny would be my safest choice to take.

8. If you could experience the equestrian community (i.e. ride and compete) in another country, what country would you choose and why?
I have horse shopped in a few countries in Europe, and got to go to a handful of small horse shows. So um... one of those countries... I'm going to say the Czech republic I think. Everything is quite a bit cheaper there, but the horses are all bred very similarly as the German horses.

9. In your opinion, what is an item of tack that is given unnecessary hype?
CWD saddles. Sorry. I hate them.

10. What was the first horse you rode called? Are they still alive?
I'm going to exclude the pony rides I took at the fair since I have no idea what they were named. But the first horse I lessoned on was Daisy. She was a quarter horse, around 15 hands, and EVERYONE started on her at my old barn. She very sadly died in the barn fire in 1994. It was devastating. She didn't deserve such a horrific end.