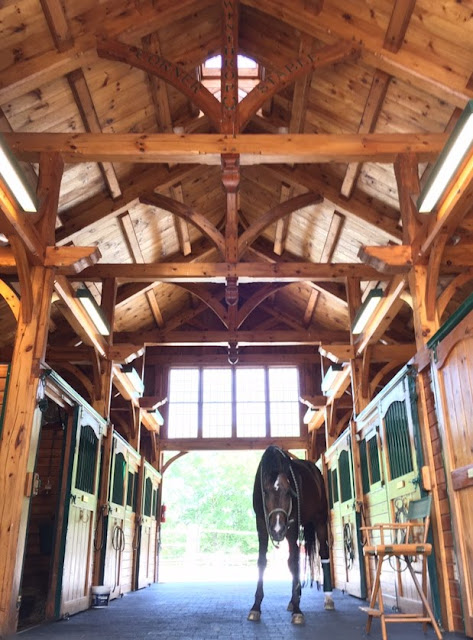 I don't really know how this day has come. Early this morning I had to let Rio go. It was just as hard to do as I always imagined. I will write him a proper tribute at a later time (Jampy's too... I'm really behind, who could have known this would happen so soon after?) but I wanted to share what happened and a maybe just a short look back on our time together to break up the text and remind us all of better days.
I got home last night a little late from work, and Rio was lying down. He's a pretty avid napper, but not usually at the time of day. But he seemed comfortably napping and got up when I opened his door. I thought it was weird but maybe just that. After I threw hay to everyone he went back down. Crap. I got him up and took his temp and called the vet. Wouldn't you know my vet is away at conference? Of course. That's how these things go. But anyway, I wasn't super worried. It was a weird weather day, and while Rio has never really been the colicky sort, he has once or twice in the 15 years we've shared had a little bout of gas discomfort. Always a dose of banamine and a little walk and he was back to good.
I gave him a dose of Banamine and some ulcer guard per vets directions and waited. He laid back down and napped very quietly. Which I didn't like. He was down for about an hour, and then finally got up. I had been in contact with the vet and he gave me some numbers for vets on call. The one for my area was still an hour away, but he wasn't wildly uncomfortable so I was okay with the wait. I wound up having to walk him while I waited.
When she arrived she did the normal: rectal exam, vitals, etc. We decided to tube him and she gave him some more pain meds. He needed some sedation for the tubing as he really hates that. Hated. I guess. Anyway, he napped comfortably standing while the sedation wore off and the vet went home leaving me with plenty of instructions. At that point we were pretty sure he'd come out of it. We were thinking minor impaction, but nothing was displaced.
The pain meds started wearing off around 12:30 am and I asked the vet to come back. She did, and we walked for the hour it took for her to come. She did another rectal and found some things had changed, and not really for the better, but still nothing terribly bad. Next step was more pain meds and IV fluids. I had long ago made the decision that he wouldn't go to the vet hospital if something like this happened. At 23 he's not a surgical candidate, and he doesn't need to go through stress like that if we can do all the same things at home for the most part.
The pain meds started wearing off in about an hour. So we gave some more while the fluids dripped in. They wore off faster. He was never horribly uncomfortable seeming, he wanted to lay down but didn't want to roll. It was all thankfully, not overly traumatic. But it made it an awful lot harder to make the decision. The vet let me know we could wait and see but we had done all we could to keep him comfortable and it really wasn't working. I won't let my horses suffer needlessly and so the next time he was down and started looking to his belly, I knew it was time. Worst moment of my life. I'm glad he was down when we did it so he didn't have to fall like Jampy. (That's really traumatic to see.) It was all very peaceful, and exactly what you'd hope for your horse when the time comes. The cremation people fortunately live very close to me, and are available 24 hours a day. I said my last good bye to him at 4:00 am and they were there in about an hour to get him.
I always knew eventually this day would come. And I of course knew it was getting closer and closer. But you're never really ready when the day arrives. I wish our vet had been with us. But the vet who came was wonderful, caring, and kind. She never rushed my decision despite being at my barn for three hours in the middle of the night. She told Rio he was handsome and wonderful. She said he was a brave boy and did his best. She was right. And she has no idea really how much so.
Rio fought like a champ when the whole EPM thing happened. He came back from the brink and gave me 5 more amazing years. The best day of my life was the day I got to sit on him again for the first time since the diagnosis. I'm sad I can't make any more memories like that with him. But I'm holding on so tight to all the ones we did make. Like all of his birthday celebrations. 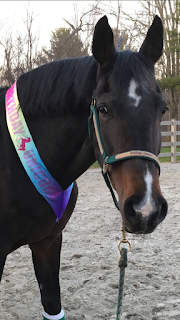 Fifteen years together. It was an incredible run, and there's a giant Rio sized hole in me right now. I can't even count how many people have reached out. He's touched a lot of lives just by being Rio. The most handsome horse I'll ever own. The most honest. The most stoic. The most loyal. The most loving. He was just the most everything. 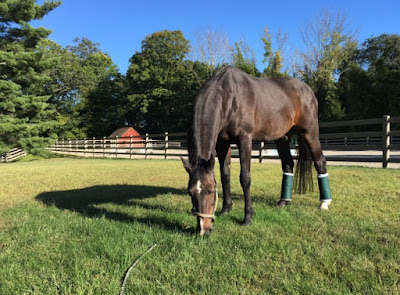 I hope he finds fields of his favorite grass and his brother Jampy on the other side. Rest easy Rio. You were my best friend. I'll miss you always and love you longer than forever.
Posted by Stacie Seidman at 12:56 PM