It was another fun horsey filled week! Friday was one of those non stop days, but it was mostly fun. I had the morning off from work to do the barn chores and turnouts. It was one of those perfect mornings. Sun was out, it wasn't too hot. The horses were all content in their turnouts. It was a shame to ruin it by going to work... But alas, that's how I afford to feed them. Stupid adulting.
My job sponsored a night out for us lowly employees on Friday night, so the horses had the evening off, and I got to see some minor league baseball! 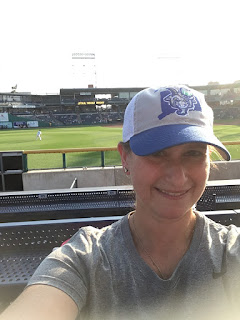 We were seated in the picnic area which includes a buffet dinner (but ballpark food, nothing fancy). The seats are kind of far away, but it was nice to be able to walk around easily, especially for the people who brought their littles. Our local team is named the Yard Goats. There are two mascots, but we got to see the blue one:
And they actually have a couple real goats that hang out at the stadium during games. 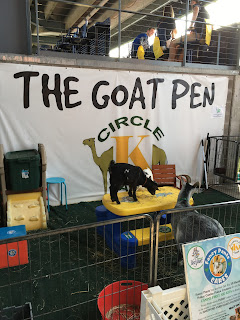 They had fireworks after the game, which were totally lame... but it's a nice effort. It was a fun night!
Saturday was all ponies all day. I started out with Eros. We had to ride indoors as they were finishing up re-doing the footing outside. It was fine though, there were only a few of us in there and there was a  breeze through the open doors. He was a good boy as per usual.
I headed home from there to tend the rest of the herd. But first I let my pups out, and then my neighbor's because she was out for the day. How adorable is this pack?!
Then it was horse time! I did Pammon first. We had a nice flat, and then wandered out to the yard for some grass snacks. Pammon wears a martingale though, and so snacking tacked up has been a hassle. I did come up with a solution though! 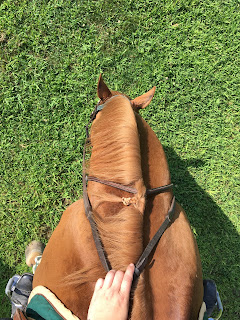 That's right. I braided his martingale into his mane. Totally did the job.
We followed snacks up with a shower and fan time. 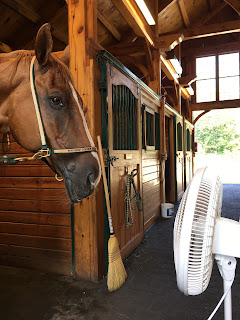 Shiny had a similar day, also finishing up her ride with snacks in the yard. 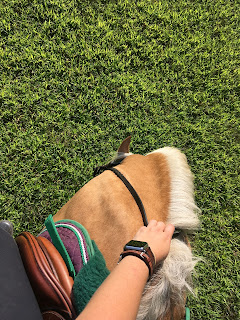 Then she had a shower and took some selfies with me. She's the cutest. 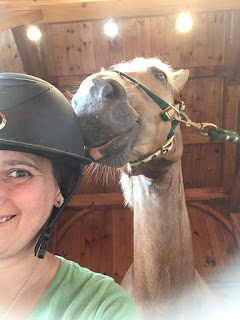 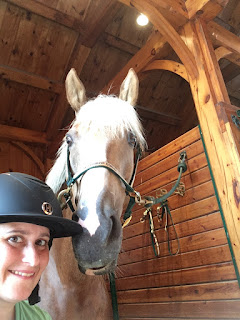 Rio skipped the riding part and went right to snacking. 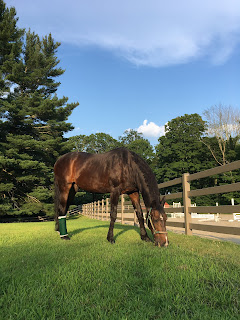 He's the most handsome. Ever. Try to argue.
It was dinner time for everyone at this point, so the tall kids were fed, and I ran out to pick up some Thai for dinner. (Solid choice!) I spent the rest of the evening with the short kids binge watching season four of the OC. I had forgotten how awful the last season was. I remember now. They did redeem themselves with the last episode though.
Sunday morning was a little exciting. I've said it a million times (but you know how those things go...) that the stall doors need to be closed if horses are in the walkout behind said stall. Well. Weekend helper had Pammon out in his walkout behind his stall, but she was still working on cleaning it. The door to the walkout was latched (from the outside, where Pammon was) but the stall door into the aisle was open.  Helper was in the aisle when Pammon let himself in and promptly back out via the aisle door. Right out into the yard! I was especially worried because part of my fence on the side of the property came down in a storm a bit ago. I haven't gotten it fixed it yet, and I was CERTAIN he was going to run into the road. Thankfully he didn't, and we were able to catch him relatively quickly. It wasn't easy though... Horse is naughty!

After all that I was ready to get to Eros' barn. Our trunk had arrived finally! 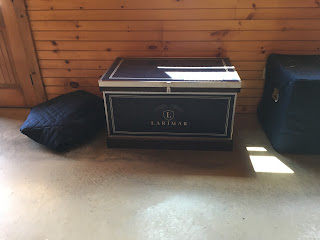 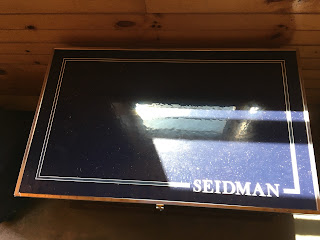 Eros and Fefe have accumulated enough stuff that our lockers weren't cutting it for storage anymore. Plus if I ever show Eros with this barn, I'll need a trunk anyway. So dad generously got one for my stepmom and I to share. I'm excited to get all of Eros' and Fefe's stuff moved over there.

I finally forced myself to fix Eros' mane that morning too. It had really gotten out of hand. It was more than halfway down his neck. He looked like a wild mustang. But now, he looks MUCH better. 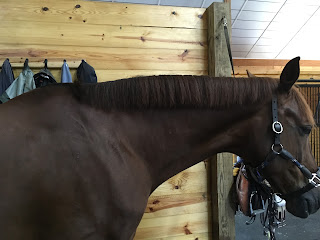 And then finally I got him ridden. The outdoor ring was all put back together, and the new footing was lovely to ride on. Nice and fluffy again! No lessons the last few weekends with Eros since everyone has been in VT. And I'm away this coming weekend. But hopefully we'll get back to business after that.

I headed straight home once Eros was tucked in to get moving at home. I wanted to jump both horses a little bit. I started with Pammon, and while he was a perfect angel, I was less stellar on Sunday. Everything was fine, nothing horrible happened, but we just never found a nice flow. Some days are just like that I think. 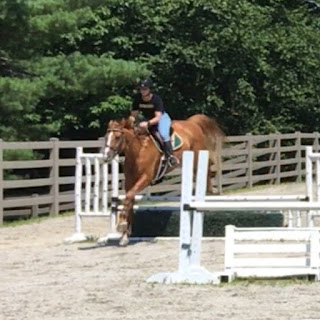 The ride was similar with Shiny, but in her case, I asked a lot more questions than the other times we have jumped. I put out some jump fill for her to pop over, but just on its own, without standards. I didn't really think that would pose an issue, but she actually did try to bulge past it a couple of times. I found a few places that she's very green also. Namely, she has no idea how to handle the deep distance. Or how to adjust to make it less deep. That's not at all surprising though as she's still working on moving forward with contact while flatting. She has lots to learn, but she's super game and really fun to work with. 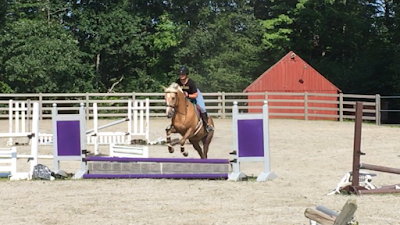 Once the jumping kids were tucked back in their stalls, Rio got to spend some time outside enjoying some grass. I still can't get over how shiny and great he looks this year. 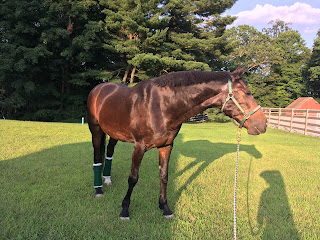 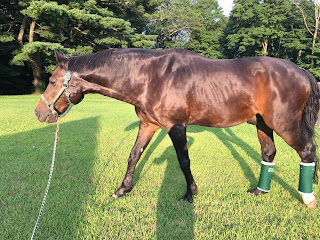 That's all him! He's not wet in either of those photos! What a stud. 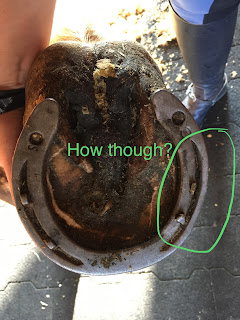 I have no idea where the missing nail went, but do note that one remaining one isn't doing much! I sent that photo to my farrier and he said to keep him in and they'd fix it today. So Pammon had a shower (it was hot and humid that day and he was sweating just hanging in his stall) and the day off. Shiny had a good ride though! She worked her tail off, starting to practice going forward with contact. It's not easy! But she's getting it. Slowly.
That's about it from here! I shall leave you with this adorable photo of Shiny having a snooze. (I haven't ever caught her down before!) 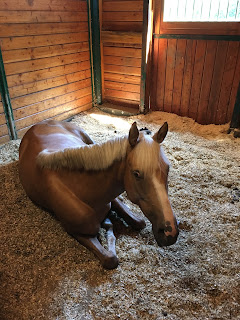 OH! One other fun thing that I probably should have put in yesterday's post. I had ordered grooming halters a few weeks ago for the kids, and they just arrived this past weekend. They're so cute! 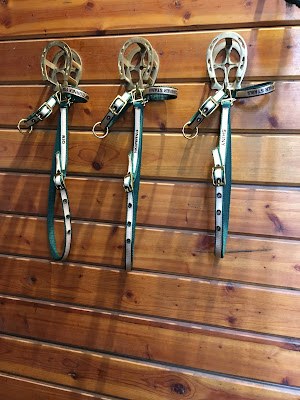 Ok, that's really it this time. How was your week/weekend? Take any lessons? Have a jump school? Buy anything fun?
Posted by Stacie Seidman at 3:51 PM