Phew, time is flying! Wednesday already? Summertime is my favorite time of the year, but it sure is busy. Not that I'm complaining, I love having fun stuff to do and horses to ride. And I love the warm sunny weather.
I scheduled an extra lesson on Eros last week because there aren't any trainers at the barn the next two weekends. They're all up in VT at the show. So Thursday after work I headed over there for a lesson. It was probably one of the best I've had with him lately. Maybe things are starting to click? 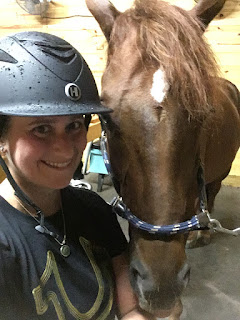 We worked on some more hunter style courses instead of lots of bending lines and roll backs. While I do think all horses should be able to do those things, it's also nice to work on what we would actually be doing if and when we get to a horse show. Eros definitely needs to get stronger behind, I think I need to work harder smarter about getting him back on his hind end when we flat. He's fine when the jumps are 2'6" but he's really unloading himself when the fences are 3'. It's ugly and hard to stay with! I know he has enough scope for the 3' so I think it's likely a strength issue. That aside though, he was really good despite it being a little rainy and late.

Friday after work was back to my four legged kids at home. They both just flatted since they had the day off on Thursday. Nothing too exciting from those rides to share! (Never a bad thing!)

I had 4 manes and two tails to braid Friday night, but the customer asked to have one of them done in the morning before they left at 6:15. There was no way time-wise to do some and then go back if I wanted to sleep at all, so instead I just started late and braided through the night. I got done at 5:30 which was perfect, as they were just arriving to feed. Hopefully breakfast kept the horse occupied so he didn't rub. 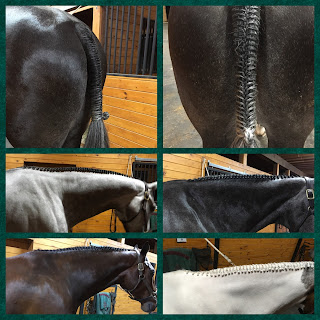 It was a long night. I climbed into my bed at 6 am and slept until 9. You guys. I am WAY too old for these all nighters! Anyway, I dragged myself out of bed and went and ran some errands. My car's emissions were due, so that was my first stop. Then coffee. Then off to ride Eros. He was kind of funny Saturday. I had new reins I was using, and they were so slippery I felt like I couldn't get anything done properly. And he was oddly kind of forward and sassy. It was a weird ride, but not bad really. Needless to say, those reins are going in the trash.

Next I headed home to ride my other two and take care of Rio. I planned to start with Shiny, but when I pulled her out, she had a fat hind leg. I couldn't find any cuts or anything, and her tendons didn't palpate sore, so I'm guessing she just bumped her leg on something. I wanted to ice it, but when I was putting the ice boot on, she kicked out at me. I smacked her, which wasn't all that smart since I hadn't fastened all the straps yet... So she jumped forward and the boot slipped down. She proceeded to panic. stomp my wooden brush box to kindling, and break the cross ties. Fortunately, once the cross ties broke she gave up her antics and I stuck her in the wash stall. I figured she could stand there and calm down while I cleaned up the mess. And then I cold hosed instead of icing. We followed that up with a hand walk and some grazing. Finally I wrapped her up behind and tucked her back into her stall. 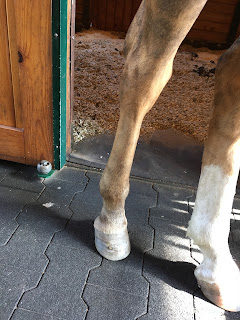 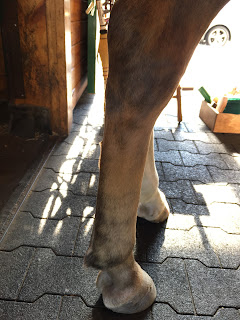 Next was Pammon! He was perfect for our ride and I was grateful given how tired I was! We just flatted and worked on things like my dreadful sitting trot.
Pammon enjoyed some grass after our ride too, and then it was Rio's turn for attention. He had a nice grooming and some grass.

I had a ton of stuff to do in the house (how does one person make such a mess?!) but I knew I likely wouldn't do any of it given my three hours of sleep. And I had really wanted to stop by the carnival in my hometown. So after I fed the horses and the pups, I headed over there for a few minutes. The carnival is a fundraiser for the fire department there in town which is all volunteer run. After the fire at my childhood barn when I was 14, I try to always come and support the carnival. It's the least I can do.
It was already dark when I arrived, which makes it look way more fun. 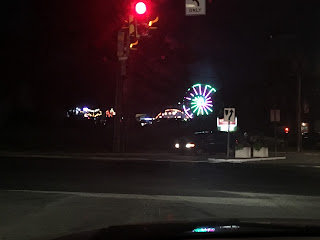 I wanted to play a couple games and eat some crappy food. So I did just that! I won a unicorn at the dart game and stuffed balloon dog at whack-a-mole. Then I ate some fried oreos and left. I don't think I was there even a  half hour. Ha! Efficient! 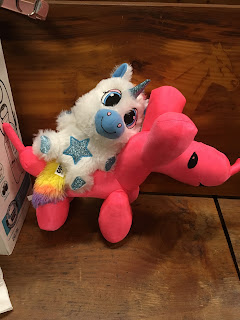 And then I went home and fell asleep on the floor with the pups... I woke up at 4 am and went to bed. I really need to stop doing that!

Sunday morning I had another lesson with Eros. This one went great too, which is kind of mind blowing. I'm a little bummed I won't get to jump again for two weeks with him now that things are coming together. But that's pretty much the story of my life isn't it? Lol. It was pretty hot, and Eros was letting me know that while he was drying off from his after-lesson bath. 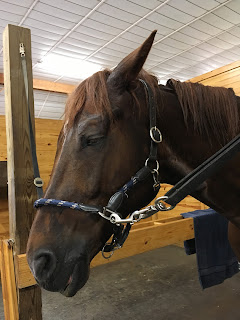 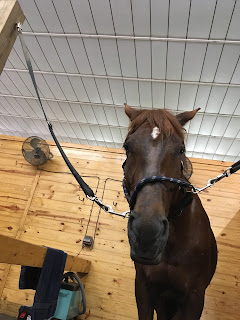 I skipped the farmer's market and just went straight home. I rode Pammon first. He was fantastic! I hadn't planned to jump, but decided to because I was feeling pretty good about things after my Eros lesson. Pammon was perfect! Everything was coming up out of stride, and he was landing softly and seemed like he was having fun. If I had more energy I would have gotten off and put the fences up some, but I didn't. Maybe this week! 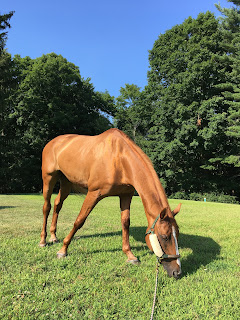 Shiny's leg was still puffy, so I gave her another day off. We hand walked and cold hosed, and had some grass. Perhaps she did it on purpose to get out of working during the 95 degree weather? 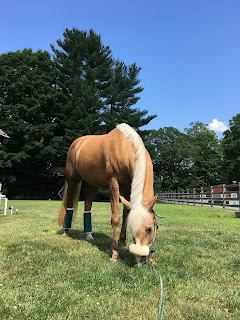 Since it was so hot, I brushed Rio off quickly and then gave him a rinse before heading out for snacks. I think he was grateful! 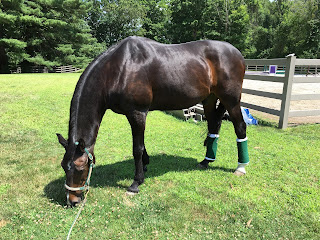 I decided after taking care of all the horses that I had to skip the lake and do my adulting in the house. So I did some laundry and straightened up and that was the end of the weekend.

Monday was only half boring though! I worked in the morning, and then went to the Bronx in the afternoon to watch some baseball! I LOVE going to Yankee stadium, and Monday was a blast. It was hot when we got there, but by the time the game started the sun was low and it was the perfect temperature out. 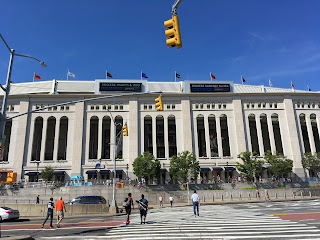 And I got nachos in a helmet so that's pretty much all a girl needs right? 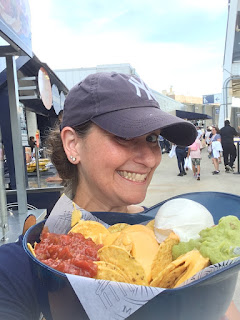 On top of a super fun evening at the ball park, mother nature treated us all to this view as the sun went down: 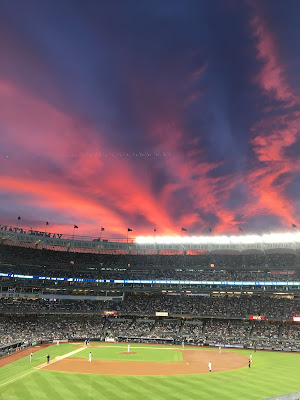 The Yankees were leading going into the last inning, but they managed to blow it and lose. So that was a bummer. But I still had a great time. It was another late night though. I got home after 1. Tucked in the ponies and then crashed for the night.
Tuesday morning came FAST. But I made it to work more or less the same time as usual (which really isn't what you'd call "on time". I'm a terrible employee when it comes to punctuality in the morning...) I was hoping to ride both horses after work since Shiny's leg was looking better when I checked it Monday and also Tuesday at lunch time. But when I got home from work she had a big gash in it. I honestly don't know what's going on when I'm not home, but whatever it is, she keeps hurting the same leg! So I scrubbed the cut, cold hosed her, and wrapped it back up. It was very sore, so I didn't think riding was the right thing for it. What's another day or two off?
Pammon was perfect as always, though a bit lazy. It was still close to 90 when I rode him last night and humidity has been creeping up. Today the high is 91 with 70% humidity so I think it will be another easy ride. There are storms coming though, so it may be a day off... time will tell!
And that's about it for last week! How was your week? Do anything horsey? Lessons or horse shows? Tell me about it in the comments!