First things first, I'm happy to report that I had two noise free rides last night. So that was a relief. And so far, none of my tires are flat. I'll give that a couple more days before I celebrate though...
In other non-exciting news, I DID try and get the solo shot working this weekend, but unfortunately, I couldn't get it to work. Everything seems to be setting up correctly, but it's not reading the tracker. I only had so much time to dedicate to tinkering, but I'll keep at it. I'm sure it will work eventually!
It wasn't the most exciting week (other than Monday night) but it was pretty busy. Friday morning my helper had off and my back up worker wasn't available so I took the morning off work and did the barn myself. It was a beautiful day, so it was nice to skip work and hang with the ponies for a bit! Admittedly though, it was super hard to go into work for the second half of the day. I did it though! (Pats self on back.)
The weekend was busy! Pia had her annual vet visit Saturday morning at 8:20, and Artie came along to get his nails trimmed.
Pia had a good visit, with no new worries, and we were home around 9 to get moving with the day. I spent about an hour updating the solo shot, and then headed out to the barn. I grabbed my stuff and went to ride Eros first. We usually just flat on Saturdays, and he was perfect (of course). It was pretty hot, around 90 with high humidity, so I didn't do too much with him. Just enough.
Once he was dry and tucked back into his stall, I headed back home to tinker with the solo shot. I was out there in the hot sun updating (again) but alas, was unsuccessful. So I just went ahead and rode my horses. They've both been very good! I'm finding the buttons on Pammon finally. I still can't sit that massive trot... but hopefully eventually I will be able to. Shiny has been a little extra lazy, and I think I need to start carrying a stick. But she's been good overall. I'll take a lazy pony over a sassy one any day!

Rio got to spend some time doing what he loves best too. 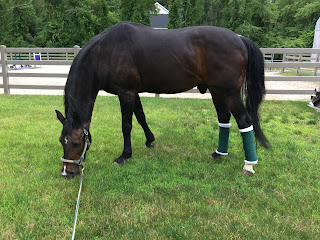 I spent the rest of Saturday running errands. I replaced the box fans in the barn and maybe stopped at Ben and Jerry's for sustenance.

Sunday morning I had a 9:15 lesson with Eros. I tried a new bit. It's a knock off of the Neue Schule trans angled pelham. I think it's the best one so far! He doesn't flat that well in it, but I did have more control after the jumps. Not total control mind you... but more at least! That horse gets STRONG sometimes! He's kind of a bad horse for me because I love to pull and he requires a fair amount of that... I mean, it's nice team work right! Haha! But he's not helping me fix my bad habits. He was great though, and I felt like it was a good lesson.


My good neighbor (who lessons with me!) and I stopped at the farmer's market after our lesson. But we were so late almost everything was gone. I got some cheese and bread though, so all was not lost.

And then it was time to ride! Again! There was a threat of heavy storms, but the skies were still clear, so I figured we should be alright. I did Pammon first. We had a great ride, and even added in some canter poles. 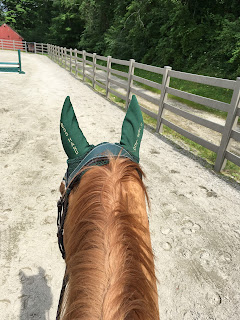 Unfortunately, just as I finished rinsing him off, the wind came. And with that the rain. And the HAIL! It came on so fast, I didn't even have time to get the barn doors shut! I got DRENCHED closing them, and the barn was this flooded in the matter of seconds: 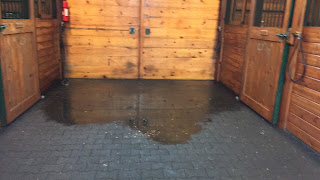 Amazing what nature can do, isn't it? Anyway, it passed really quickly, so once the sun was back out, I started getting Shiny ready to ride. Unfortunately, just as I finished brushing her, another line came through, and I admitted defeat. More rain, more hail, and a worked up pony was enough for me!
I groomed Rio and then cleaned up the barn. By then it was about feeding time anyway.
Once everyone was fed, I headed over to the lake. It turned into a gorgeous evening. The humidity had lifted and the temps had dropped into the high 70's.
I had my lobster roll and listened to some tunes. 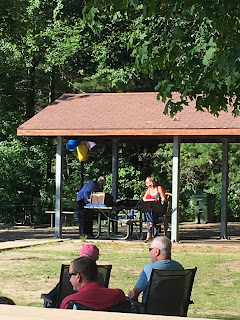 I didn't stay too long, because I had things to do in the house, and pugs to hang out with. But it wound up being a lovely evening despite the earlier storms. 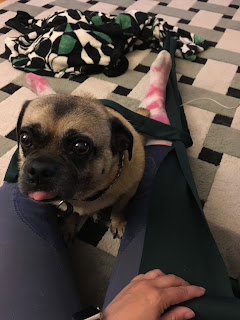 Trainer is back (but only until Monday, boo) so I'm hoping to have a lesson with Pammon tomorrow afternoon. I haven't moved my jumps in ages, and don't really have a course set, but I think at this point single jumps are fine for us. I need some flat work help too. I'm so excited to get trainer over for some guidance! Hopefully neighbor won't sabotage the lesson. Fingers crossed!

How was your week/weekend? Do anything fun and exciting? Horse show? Lesson? Something non horse related?  Tell me all about it in the comments!
Posted by Stacie Seidman at 11:05 AM