This week was so weird with the holiday on Thursday. My work was open Friday, but there were like five of us here and it was such a waste of a nice day. What can ya do though, right? Adulting. Hopefully I'll get brownie points for showing up. Anyway, Let's look back at the week!
Since Thursday was a holiday, I got to spend it riding horses ALLLLL DAY! I started with Eros over at the boarding barn. He was perfect of course. We just flatted and it was a lovely low key ride. 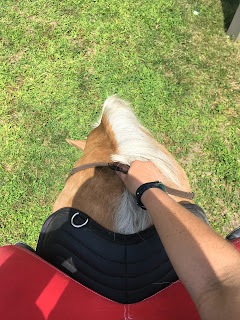 Rio had his groomies and some grass in between too. 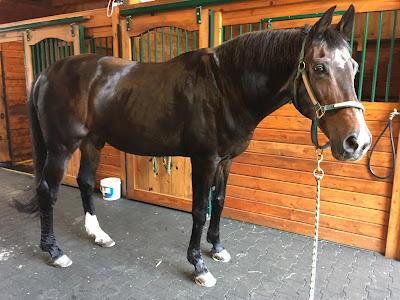 Anyway, trainer was ready a little early so that was nice, because I was too. I had a great lesson with Pammon! I let trainer know that I was struggling with the sitting trot, and also felt like I needed a little verification on pace. Everything feels really slow, but I'm not sure it actually is. She fixed my sitting trot in like two laps of the ring. Ok... maybe not totally fixed as some of the issue is weakness on my part. But she helped me improve it ten fold. She also helped fix how I was using my leg to make it more effective. (Spoiler alert, it's helped with Shiny too!)
Eventually, after all the much needed flat assistance, we moved on to jumping. We only jumped teeny little speed bumps, but it was so amazing. 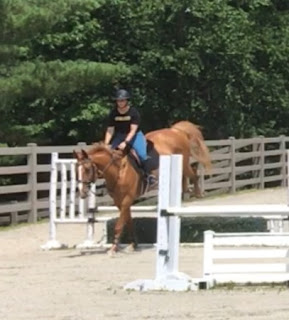 Pammon really is some kind of saint. He doesn't peek at the jumps at all. You point, he jumps. Easy peasy. I found some longer spots, some ugly chips, some good ones. And he just jumped the thing every single time. He doesn't land and get strong. He doesn't try to pull me to the jumps. He JUST DOES THE JOB. It's exactly what I need right now. I am so in love with him.
My homework is to keep jumping regularly and to start jumping a little bigger. Trainer is off to VT for a couple weeks, but she wants me to find a show for when she's home to take Pammon to. I'm not sure it's going to work out though. Trainer is only home for a couple weeks. Pammon is getting shots the Friday she gets back, and the weekend following there isn't really anything nearby. She may be grumpy about it, but I think it needs to wait until August.

I spent the evening at my dad's house enjoying some grilled food and fireworks on the beach. His town doesn't do a show anymore, but there are all kinds of private (rather illegal) shows all along the beach.

Friday was a work day, but I did ride Shiny and Pammon after work. They were both great. Shiny is getting a bit better with her canter transitions so that's promising.

Saturday was MORE PONIES! And I had to stay on schedule because our family lobster fest was that night. I flatted Eros in the morning, and then headed back home to work everyone at home, and graze Rio. After my great lesson on Thursday, I was feeling super motivated so I popped Pammon over a few more teeny jumps, and then I even jumped Shiny over a few crossrails! We had not yet done any jumping together, though I don't really know what I was waiting for. You guys. Shiny LOVES to jump! She took me right to it and jumped calmly each time. I'm so excited! She's totally everything I wanted in a backyard fun pony. I can't wait to jump some more fences with her! 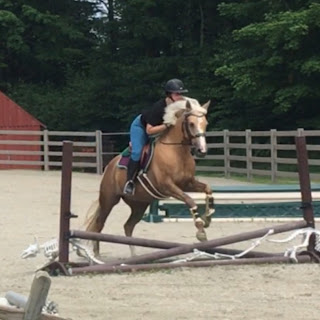 Once everyone was cooled off, tucked back in, and fed, I showered and headed over to my dad's for Lobster Fest! 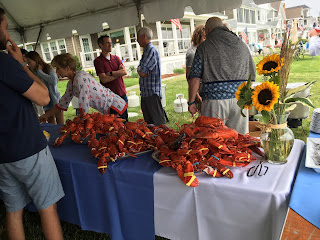 It's one of my favorite events of the year, because who doesn't love to gorge themselves on lobster?  Obviously I dressed for the occasion:

After stuffing myself full of lobster, I stopped home to drop off the leftovers and change. I had one pony to braid before bed time. 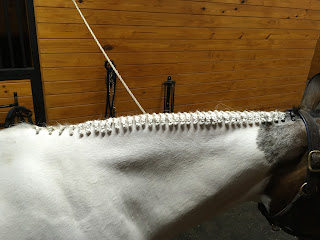 And then it was right to bed because I had a 7:30 AM lesson with Eros. On a Sunday. Oy.
It was a decent lesson, same old issues. I get dragged around, but Eros is otherwise perfect. Lol. Someday we'll make some progress. Maybe. Either way, I still think he's the best dude. After my lesson, I stopped by the farmers market to stock up on veggies and cheese for the week. And that was when I saw the text asking me to ride Fefe. Oops, somehow I didn't see it while I was still at the barn. I had time though, so after dropping my goodies off at home, I went back to the barn.
Out of sheer laziness I rode indoors. Fefe is an ass walking back to the barn after you ride and I didn't feel like dealing with it. (Full disclosure... lol.) It was actually the best ride I've had on her. She gave me some really great trot work, even coming onto the bit and lifting her back. I was impressed, didn't think she had those buttons! The indoor was quite a bit cooler than outside too, so that was also quite pleasant. 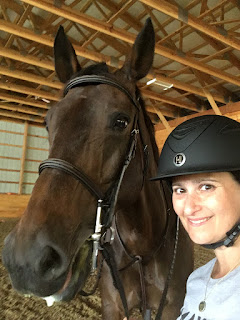 AND then it was home to work the others and take care of Rio. And then I died. Lol. Not really. But I was definitely exhausted. You already know about Monday, and Tuesday we had nice rides again. Nothing really to report.
How was your week/weekend? Did you have a four day weekend? If you did, I'm a lil' jealous...

Posted by Stacie Seidman at 4:32 PM