It was quite a week for this amateur... As you know from reading Thursday's Threads, I flew down to Florida for a long weekend on Thursday. There is only one direct flight per day from and to my preferred airports so I don't get any options as far as timing goes. The flights this year are about an hour earlier than they were last year though. I decided because of this to take the whole day off Thursday instead of just a half day. That let me get my house cleaned up so I wouldn't come home to a mess, get some errands done, and cuddle the fur kids before leaving. Definitely the right choice!
My dad and step mom actually flew down the same day as I, so we were all on the same flight. We got to the house around 7, dropped off Juno, and headed out for Thai food. What can I say, we're creatures of habit. You have no idea how devastating it is when the flight is delayed and we miss our Thai dinner! Thankfully that didn't happen this trip.
Friday morning I was up bright and early to finally ride Badger! It's been FOREVER! Or like a month. Whatever. Same thing. He was enjoying turnout when I got to the barn.

I would just like to point out that he was calmly and quietly enjoying turnout. This is ironic later...
It had poured buckets the night before, so the ring was a little too wet for riding. Thankfully trainer has a big, beautiful grass field to ride in. I'm not sure if Badger has been ridden out there before, but he LOVED it! Our trotwork was great. He spooked once at a big bird flying out of the pond, but otherwise he was fabulous. Nice big, slow, floaty trot with minimal fake sneezes/rooting. I was being a good little amateur, keeping my leg on, and having a nice elastic arm. It was lovely. Truly. And then we picked up canter.
I have a habit of letting him canter too slow and too small when we start out. So I figured, hey, I'm in this big field, I'm gonna not do that. So after about ten or so strides of a nice canter, he got a little pully and wanted to open his step more. I let him, because big field, must gallop. Bad idea amateur. BAD IDEA! Next thing I know he full on runs off with me. Which would be fine with me, I mean, I do own Jamp, king of running away. Except after a few strides of full out running, Badger let his feet fly. That baby horse can buck! I wasn't expecting it because he's NEVER bucked with a person on his back. Not ever. I think I might have stuck the first buck had it been an only one. But he let out another little one and veered right. I did my best road runner impression and did not follow him. BOOM. This old lady is getting a little old for unplanned dismounts!
Luckily for me, the grass was nice and soft (and not too wet) so other than a jammed thumb and a bit of dead arm, I was no worse for the wear. I'm sad to say I do have some grass stains on my Samshield that don't want to come off. I knew I should have brought my green helmet! Anyway, I climbed back on (slowly) and got back to work. Naughty pony kept his feet on the ground, but we decided to do our canter work on a smaller section of the field and in shorter increments. Things were going fine, but then of course, since he's Badger, he pulled a shoe. And thus effectively ending our ride. Little turd. Good thing he's so cute!
The other two horses I sometimes get to ride are out of commission so my riding time was over for the day. I watched trainer ride her other two horses though, which is always educational.
After pony time, I joined my parentals for family mani/pedis. There's really something to be said for vacationing with the parents. Free mani pedi's? Yes please.
My brother and his family arrived Friday evening, so we stayed in for dinner. Dinners out with a three year old and a 7 month old are, well... we'd rather stay in.
Saturday I got to sleep in a little. Trainer's hubby is also our farrier, so Badger was getting his shoe on, but not until around 11. I got to the barn early anyway because I really didn't have anything else to do. 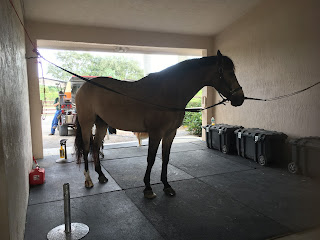 One he was done getting his pedi and new shoes, I got to ride. We were able to ride in the ring, and I was a little relieved. Eating dirt always leaves me a little apprehensive for a ride or two, so I was happy to be in an enclosed sandy area. I had no need to worry though, Badger was great. We cantered all the way around with no antics. And I behaved myself using my legs and keeping my hands soft. Apparently baby horses like it when you ride correctly. Too bad it's taken me a year to figure that out!
The rest of Saturday was pretty busy! My stem mom's family was arriving from Orlando, and we had to take a trip to Toys R Us to fill a few carts for Toys for Tots. The annual boat parade was that evening, and the marines come around in coast guard boats collecting donations.

That was half, we filled the other car's trunk first in the hopes that I would have a seat. No such luck.
The boat parade was a lot of fun this year. Last year it was windy and rainy, and thus was poorly attended. This year there were TONS of boats fully decorated. My dad has his friends over and caters the evening. I invited trainer and her daughter who had a great time with my niece. The boats were awesome: 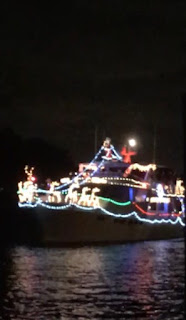 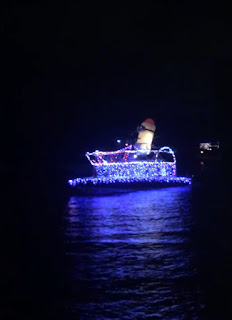 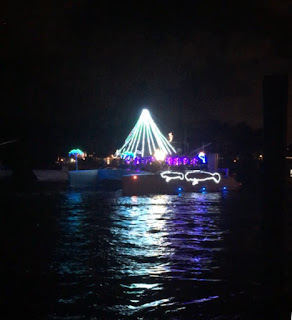 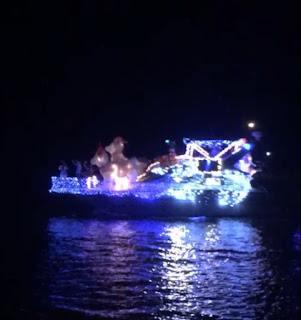 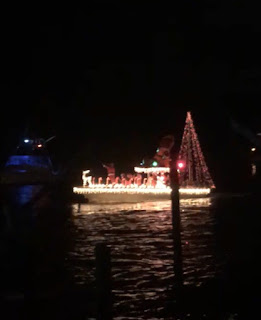 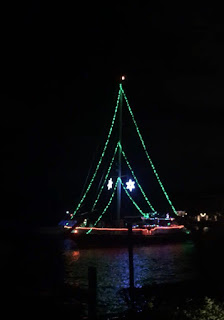 With all the family visiting, I had to give up my comfy bed for a foam mat on the floor of the billiard room. My aching body didn't love that, but you gotta take one for the team now and then, amiright? A glass of wine helped me sleep like a baby though so all was well.

Sunday morning I was the only one riding. Since trainer's daughter started school this year, trainer is taking Sunday as her day off so she can spend time with her little. (She used to take Monday's off like most horse people.) She had no issue with me riding though since I was going back to CT Monday morning. AND I got to groom my own horse! (I know having a groom is a total luxury, but since I groom all the horses at home, I really like doing it. I think you get to know them a lot better when you take care of them.) You know what happens when you groom your own horse? You have lots of selfie opportunities. Badger hates sharing the camera with me, but he love to be a clown for his own pictures:

Badger was great. I even faced my new found fears and had him gallop lengthen the canter down the long sides. No bucking what so ever, and he only spooked once at the dog. All in all, I'd say it was a successful weekend with the yellow horse, despite the rough start.
I didn't hang around the barn after getting Badger tucked in since no one was there, and also because I really should be a solid member of the family while we have guests. We all went out for froyo and then did a bunch of this:

It's a dog's life in Florida for sure.

Usually on the days I fly home, I like to get breakfast at The Lazy Loggerhead, but it was not to be this time. My brother and his family were attempting to get out the door early. They were driving to Disney for a few days. Between that chaos and the slightly earlier flight, there was no time for breakfast out. Maybe next trip!
My flight home was uneventful. I got back early enough to unpack, take care of the ponies, AND go buy groceries before meeting my mom when she got out of work so I could pick up the short kids.  It turned out to be kind of a long day, but definitely a good one. It's hard to leave Florida this time of year (who wants to head back to the frozen tundra?!) but it's always nice to come home. Especially with so many four leggeds waiting for you.

Tuesday it was back to the normal schedule, work then riding. I got to ride Tuesday and today, which was nice, but tomorrow the temps are supposed to drop and I think riding will be on hold at least for a few days. Such a bummer.
And that my friends, is what's up this Wednesday. What's up with you? Have you been riding? Do anything fun this weekend? Tell me about your week in the comments! Or feel free to share a buck-off story to make me feel better about myself.
Posted by Stacie Seidman at 11:50 PM