I had to postpone the Thanksgiving edition of Thursday's Threads since I didn't end up riding on Thursday. But fear not! I'm here a day late with some ridiculousness to share. I'll start with my outfit, and I apologize for only having a partial full photo.

Yes, I wore this sweatshirt last year. And yes, I will likely wear it again next year too.
Sweatshirt: Rue 21 I mean, it's pretty accurate. I ate so much yesterday, I'm still full!
Belt: Unbranded 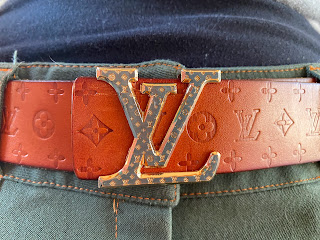 It LOOKS like a Louis Vuitton. But I can assure you, it is not.
Breeches: Smartpak 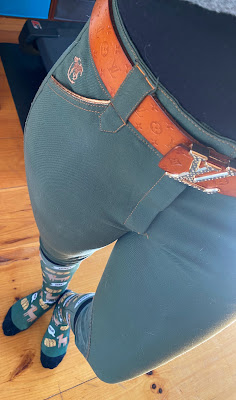 I've sold most of my pipers but I've held on to this pair because I like the metallic piping. The stitching is more orange than copper so I figured they would work well with Thanksgiving theme.
Socks: Dreamers and Schemers 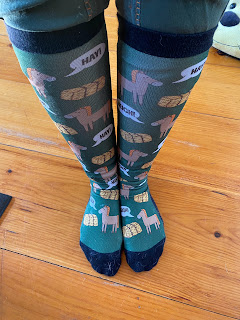 These aren't Thanksgiving socks, but they matched my outfit.
Okay, so that's what I wore to the barn on Thanksgiving. And now it's the horses' turn! Al had a training ride today, so only Eros and Shiny dressed up. Here's what they wore:
Bridles: Joseph Sterling
Browbands: made by me 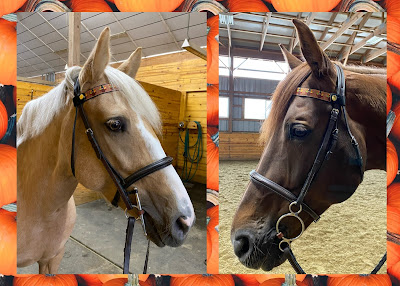 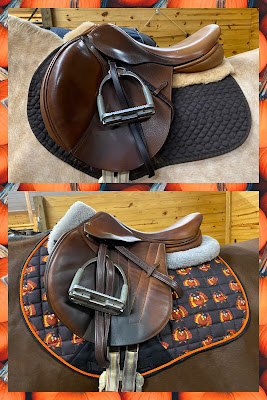 I'm replacing that pad of Shiny's since it's a little too small for that saddle. This is probably it's last time on the blog. Say goodbye! (Also it's for sale if anyone is interested. Fits up to a 16.5" close contact saddle. Or a 17 that's just less bulky. It worked with the old Butet. Make me an offer!) But let's just take a moment to appreciate that Turkey pad, shall we? I had some fun with clipart... I think it's amazing. If you disagree, keep it to yourself. I forgot to bring the brown half pad with me though, so we failed in the matching department. Something work on for next year I guess.
Boots: Equine Star 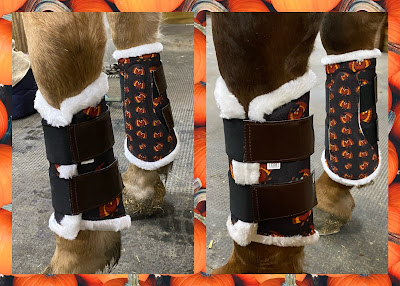 You knew there'd be boots, right? I mean, who buys a pad like that and doesn't get boots?
So that's it for Thanksgiving. Next week is Chanukah already! I still have a spirit week outfit to share too, so there will be some fun outfits to come still. I imagine most of January will be pretty boring, outfit wise, so I'm excited to have some silly things to share now at least.
Posted by Stacie Seidman at 7:38 PM