Big week over here! First things first, my girl Pia turned 15 on Monday! She's been my sidekick since she was an itty bitty pup and I hope we get to celebrate lots more of her birthdays together. 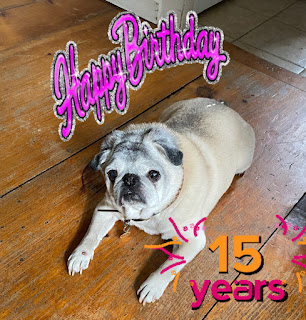 And the other exciting thing that happened this week was I finally got to show! It wasn't a real show, just a little in-barn schooling show. I did the 2' hunters against a couple of teens and a tween. But you guys. It was SO FUN! I am glad there was a warm up though...

They had bought new flowers for the jumps just for the show, so Shiny hadn't seen them yet. I was sure she would take a look since she's always a little skeptical of new flowers. She popped up high over the first little crossrail, so we trotted that one more time before starting the course. It started off well, and she was jumping right around until we got to the last outside line. It was set oxer to vertical which I'm not sure I've ever done to her before. Shiny looked hard and actually stopped. Which she doesn't normally do, and I think she had the same realization. Because just as I was going to turn her away to re-approach she just sat back and launched herself right over...

I was proud of her for being brave, but honestly Shiny, we could have just tried again... Despite being essentially launched backwards, I manage to stay on, and we tried it again. She ducked out this time, so then I had to get a little tough. After that it was a non issue, but she definitely kept jumping that one a little extra:

She was super excited to be competing I think. Normally we add one step in the horse lines without much trouble, but at the show it was tough. She actually did the horse steps in one line while we were warming up.

So for the actual classes, we were pretty unpolished. The lines got pretty tight and she doesn't have a lead change. It was tough to get the simples done because she wasn't wanting to slow to the trot. But I'm not complaining. When a pony who never wants to go forward is doing just that, you don't get mad about it!

I know we have a lot of flat work holes still, especially when it comes to being adjustable, but it was a great first experience. We had some chips and missed changes, yes. But we also jumped all the jumps, and had fun doing it. So I'm calling that a win! We finished 3rd and 4th over jumps (out of 4) but she pulled out the big win on the flat! We flatted with martingales because we are lazy and it was a schooling show. But she doesn't really need it anyway. Not worried about that.

The other best parts of the day were getting to wear the fabulous Winston jacket I got myself last year for my birthday AND that our in-barn photographer was so kind to offer up all our photos for free! She's the best.

One of the moms videoed from the viewing area too! How great are my barn peeps you guys?! So you can watch us being a hot mess in our courses below.

In true Stacie enters a horse show fashion though, I had a little scare on the Friday before the show. Shiny had a big fat leg that palpated sore. Ugh. I had planned for Friday to be a bareback day since she had worked hard in a lesson the day before. So I went ahead with that plan and she felt sound. The swelling wasn't down when we were done though, but in a rare stroke of good luck the vet was out for some other horses already. He took a look and diagnosed a mild case of cellulitis. Which, not good per se, but great news because a good leg scrubbing and some antibiotics later and she was more or less good as new. Of course my vets office seems to hate me because Pammon was on the list for this vet appointment to get his biopsy, but they again scheduled it for a Friday afternoon which doesn't work. The tissue needs to be overnighted to the lab which needs to be open to receive it. So Friday appointments don't allow for that. UGH. I have to wait until the 26th to get that done now. Sheesh. He's doing okay, still super back sore, but we're doing our flat work. Some day that horse and I will move forward. I hope.
Eros had a big week too. He was kind of a bully in my Tuesday lesson, and then proceeded to be ridiculously heavy for our Wednesday flat work. So I decided to sign him up for a training ride on Thursday. I'm not getting the issue resolved, so sometimes you need someone else to give it a try. I was relieved to see he was just as strong for the trainer. So like, it's not just me... Ha! She was able to get him lighter by the end and listening a little better. The best part though, was that he was sound the next day. Cause you never know with him. It didn't translate to last night's lesson unfortunately, but we did end better than we started, so I'll take it. I really need to buckle down and work a little harder in our flat rides. We'll get there though! I'm just glad to be taking the steps forward with him.
In other news, I had a bracelet order to get filled for the Saratoga shows, so I got that done last week too.

Plus shipped out all the sold stuff from my tack room cleanout. That was a lot. I still have some stuff left, so head on over and browse my album on my personal Facebook page.

I hope you all had a fun week too! Did you show or lesson? Do anything else super fun?

Posted by Stacie Seidman at 9:58 AM