Outfit Day! I warned some of you this was coming... a fun theme for Passover week!

Matzo! And don't worry, Eros has a matzo outfit too!
Helmet: One K Mips 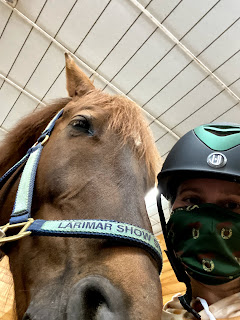 I wore the green one and my Winthrop Corner mask. I do have a matzo mask, but it has ear loops so doesn't work with my hunter hair.
Sweatshirt: Etsy 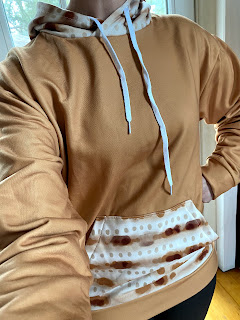 I saw a few all over printed matzo shirts, but I liked this one with just the hood and pocket printed. I wish the rest was a little different color... but it works.
Belt: Mane Jane

I don't have a matzo print belt, but I thought this snake embossed one was pretty close.
Breeches: Smartpak Piper 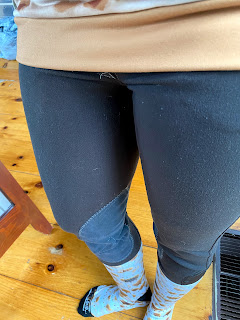 Yeah, I know. I still have a few pairs of pipers. I need to see if Dover has some chocolate brown ones to replace these. But they did the job yesterday.
Socks: Too Loud 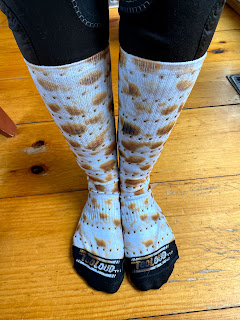 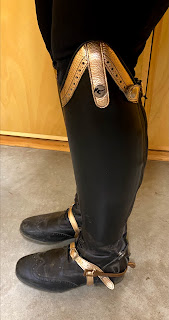 I was thinking about wearing my brown Mt Horse boots, but they aren't totally broken in yet, and it was spicy horse weather... so I opted out.
I had a couple of accessories too!
Watch Band: Zazzle 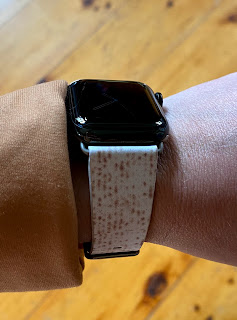 So it would seem you can make anything you want these days. The watch bands aren't super cheap, but I figured this would get used every year, and at the time, I was still gainfully employed, so I decided to have this band printed up. I kinda love it!
Phone case: Modern Tribe 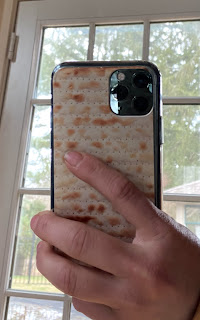 Modern Tribe is a Jewish novelty store online. I get lots of cute things for my nieces from them at Chanukah time. So when I was thinking about my matzo outfit, I went there to see what they had. And this phone case is pretty cute!
And here is what Eros wore:
Saddle: Butet (My new to me one!)
Saddle Pad: Equine Star
Half Pad: Horze 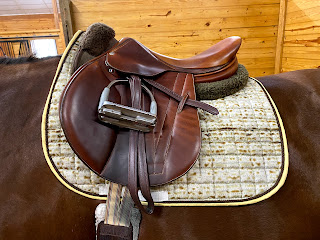 I had plans for a few sets that I was spacing out orders on, but now I'll have to space them out a bit more. Glad I got this set ordered though! It's so fun! Also, how pretty is that saddle?
Boots: Equine Star 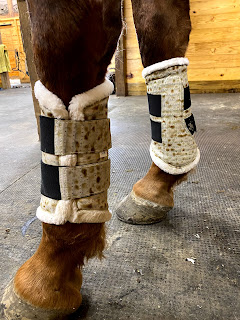 I know. Hilarious, right?! I love them. Shiny has a pair too.
So that concludes my Passover week outfit. What do you think??