It was a big week here! Friday I got my first dose of the Covid 19 vaccine (I got the Pfizer). One step closer to getting back out in society. Pretty exciting. Kinda. I mean, quarantine has kind of had me living my best life. But some sense of normal will be nice too I'm sure. Can't be a hermit forever! I get my second dose on Rio's birthday- April 23rd. Very excited!

Saturday I took it easy and just flatted all the horses, but Sunday I had TWO lessons! Not just any lesson either, no. I got PRIVATE lessons! Two in one day. I'm still tired... We were indoors because it was winter again and it was frozen outside. 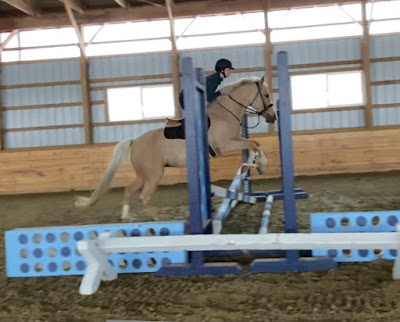 First up was with Shiny. After a few laps of trot to loosen her up each way, we went right to doing some trot poles. She was immediately interested in that. As soon as she realized we were pointed at them, she moved from her Shiny Shuffle into a real working trot. Interesting. They went from on the ground to raised, and she really had to work her booty. Then we went to canter and the poles changed to bounce rails. She's really smart with these exercises, I didn't have to help much. Next we popped over a few single fences and then strung a little course together. 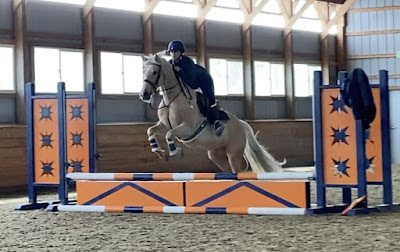 I always forget how much she loves to jump, and how easy it is for her. We called it a day after our little course since she worked really hard before we even go to the jumping part. BUT I do have video from our course!
In between lessons I flatted Pammon. Nothing exciting to report there. He was a good boy, though still having a tough time with his sore back.
Then it was time for lesson number two, this one with Eros. He also started out with some trot poles. He was fine while they were on the ground, but boy does he struggle when you raise them! He always has. It's like he doesn't realize they're raised. Eventually he worked out, more or less. Then we moved on to a fun exercise with a single raised cavalletti. It was on the rail, and we came at it first from a long approach. We alternated approaching with a collected canter and finding a spot at the base and approaching from a more forward, looser canter, looking for a more gappy spot. Eros doesn't do the gap though, and each time I would find it, he'd just open his step and close the gap. So I guess I failed at the exercise, but won at finding a perfect spot? I dunno... Then we worked a little over a line of cross rails. He's been VERY excited about jumping since we started back. So instead of jumping straight through the line, the exercise was to jump in, circle, then jump the out and circle again. It was ridiculously hard, and we weren't all that good at it. He just lands and goes off on a bit of a victory gallop. It's not scary, but it's pretty annoying. And it's REALLY hard to put a course together with such a runaway train loose horse. I have no media, but I'm not even sorry. I know what it looked like. It's hard to be mad about it though. He's just so excited. Hard to squash his joy. So instead of me squashing it, he's getting a training ride tomorrow. HA! Let the bad cop do it. 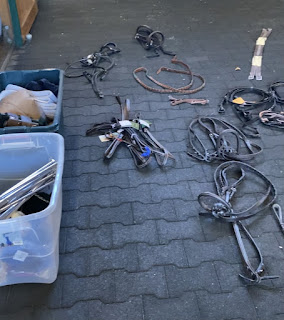 I spent Monday going through all the stuff I wanted to sell from the tack shed and getting photos. Put them all on Facebook on my personal page and the next thing I knew it was like midnight. I really didn't expect it to be such a project. But the sale is going well and I've sold the majority of it! It's on my personal page if you want to see what's left. Answering questions, packing, and labeling has been a legit full time job, but worth it!
Tuesday we had our usual evening lesson. It used to be a flat lesson, but the instructors changed their schedules and the new one has us jump. Which I don't love jumping after a day off personally, but since we're only jumping around 2' right now, I'm sticking with it. Eros was about the same as he was on Sunday, riding nicely to the fence but victory galloping away. We only worked through one line, and she had us trot in and canter out. It's set a hair short in six strides if you canter in, but we were trotting in and I was trying my hardest to slow him down, but we still closed it up in six. Which, trotting in, it should be seven. But alas. Here we are. Hence Eros earning his training ride tomorrow. Poor dude.
So that was our week! Lots of fun stuff going on. Shiny and I have something fun on the calendar for this weekend, so I'm looking forward to that! How was your week? Do anything fun? Take any lessons?
Posted by Stacie Seidman at 10:35 PM