So life is super weird right now, huh? My job hit peak crazy yesterday. I've never experienced a day like yesterday at my job, and really hope I don't again. What. A. Day! But I don't want to complain because I'm really fortunate to even have a job right now. So many people have been laid off. What a crazy thing to be living through.
We had a meeting Monday to let us know most of us would be transitioning to work from home. I was so happy to finally get that call! Setting up the home office was a little rough at first. I couldn't find the driver to make my printer talk to my work laptop. Which was okay, because most of what I print comes through email and that doesn't have to be done on the work server. But then I realized my new laptop has no usb port for my printer (I never set up the wireless on it). So I had to bust out the old lap top until I could get an adapter for the new one. It was pretty ridiculous working off three computers for a couple days. Also, I can't get onto the work server through the wireless internet, so I had to stop by my brothers to steal an ethernet cord to hardwire in. Today I had to actually go into the office to retrieve my IP phone. So things are set up and rolling along. Mostly. I just ordered a proper desk chair. I was using a folding chair I keep in the trailer, and well... it wasn't cutting it.
Anyway, you're not here to talk about work. You're here to talk about horses! So first things first....
SURPRISE!!! 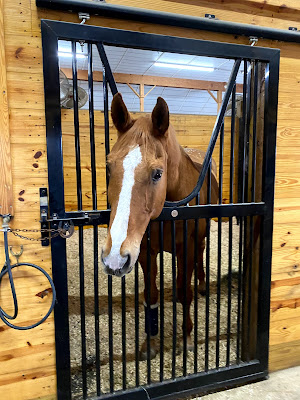 Pammon is back from the vet's! (Ignore the one wrapped leg... I think he took the other one off...) Let's back up to Friday when Eros had what I hoped would be a final follow up appointment. Our vet let me know that he ultra sounded Pammon earlier in the week, and while there's still some healing to do, he's ready to start tack walking and getting into a routine. Barn owner picked him up for me yesterday since life is so ridiculous on my end right now. For the first few days we're still hand walking. He requires some pretty serious sedation just for that so I want to see what I'm dealing with before I climb aboard.
As for Eros... Despite his leg looking completely perfect on the outside and no change at all on the ultra sound, he's still unsound. Boo. We did some shockwave on it, and he'll have one more treatment in 10 days. Then I guess we'll recheck a couple weeks after that. And obviously all of that depends on what happens with The Covid (that's what I'm calling it now). If they decide we need to shelter in place... well then the vet won't make it out. But being nqr usually isn't life threatening. So worst case there, we just wait longer. No biggie,
Shiny is doing well, though she's starting to protest this whole having to work thing. She's pretty agreeable when I let her plod around like a beginner pony, but she gets very opinionated when I ask her to start coming round and carrying herself. The horror! She's definitely feeling stronger though, so I know it's just mare-itude and doesn't seem to be pain related. She's absolutely a lazy pony, so protesting hard work is pretty much expected from her.

In pup news... Well I'm not completely sure what's going on with them. P finished her meds, and I guess I need to bring a sample in to be tested. But with everything going on, I haven't done that yet. She seems just fine though, so hopefully we're good for a week or two. Artie finished his second antibiotic but is still coughing a lot. So I checked in with the vet and we decided that despite what the tests showed, we should try some heart meds for him. It doesn't make sense that neither antibiotic helped him except that it might be something heart related. So hopefully that will do the trick and he'll be feeling better soon. Fingers crossed!

I spent some of my free time last weekend putting together all of these shelves for my bedroom. They have fabric bins that will go in them, but I didn't get to that part yet. Hopefully by the end of all this isolation my house will be in order!

Those wraps I mentioned Tuesday though? Those are still in the laundry bag...

I also have somewhat of a riding outfit to share today. Since I'm working from home, I wore jammies the first half of the day and then just put on my riding clothes. So here it is:

I wore my same ol' One K helmet and the navy boots. 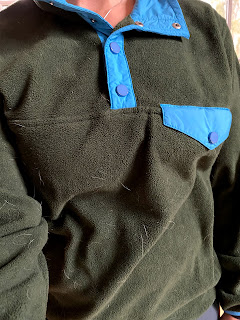 I love this throwback pullover! It's fleece which is a little annoying in the dog hair department, but it's really cozy. The colors are fun, and the snaps are rubberized. Super fun! 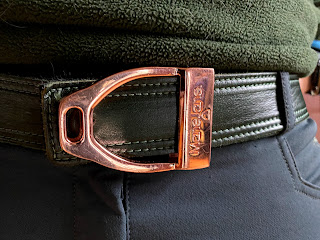 I wore the hunter green belt strap which doesn't quite go, but I can get away with that during a global pandemic. And the rose gold buckle because that was already on it... 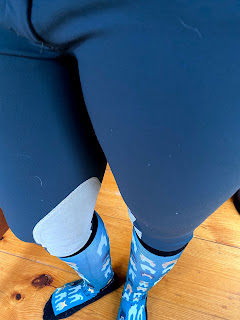 This photo doesn't really show the color very well. These are "spruce" which I think refers to a blue spruce, because they're more of a bluey-gray than a green really. Anyway, the Hadley's are way better than the pipers. I'm not sure yet if I like them more or less than the Dover breeches. Maybe about the same. 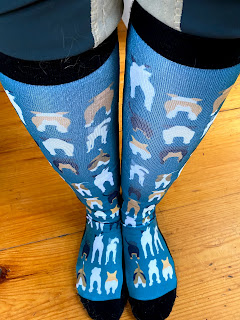 These socks feature dog butts which I find hilarious.

And that's it for today! Still about a week behind reading blogs, but some day I'll catch up with all of you! Maybe this weekend!

How are you all making out in these crazy times? Staying healthy?