This is the longest week ever. I went back to get my photos together for the last week and thought all the ones from this weekend was two weeks ago. But it's fine. Everything is totally fine.
Anyway.... Let's see all that happened this week.
Wednesday I didn't ride partly because it was raining and partly because they were having a double bridal shower for two of the girls at the barn who happen to be getting married the same weekend. One is assistant trainer, and one is a fellow boarder. She is super sweet, and even let me ride her horse once when I was ride-less (before management was all no riding other people's horses). It was a fun evening, and kind of nice to have an evening off.

Shiny had the second half of the week off completely. Thursday I rode Pammon, but had horses to braid also. And they were in two different barns, completely opposite directions from each other. I forgot to get photos of the first one which was too bad because she was adorable. And this second one was a freaking moving target the entire time. Hence her braids being mediocre at best. But hey, they're in! 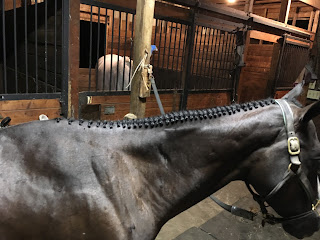 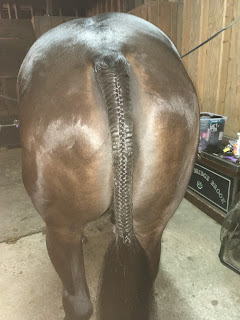 Same thing Friday, Pammon then braids. But Friday I got to have a lesson. And it went great! Not in the sense that we did everything perfectly and rainbows shot out our bums... But in the sense that I made all kinds of different mistakes, and Pammon just kept trying and being a perfect boy for me. Trainer is happy with our progress too, so that always feels nice. Three foot still looks pretty solid to me though. Ha.

I got to braid the very sweet pony just down the road from me that evening. I struggle to make this one look great. His mane is very coarse and thick, so when it's time to tie up the braids, the tails are difficult to tie in. And it kind of messes everything up. I'm still trying to figure out how to make them better. But I do think they've improved each time I've done him. 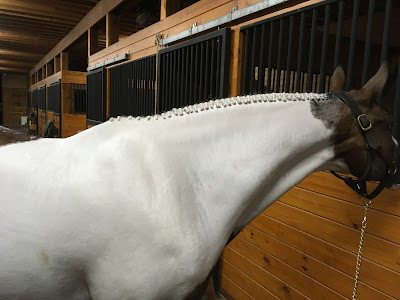 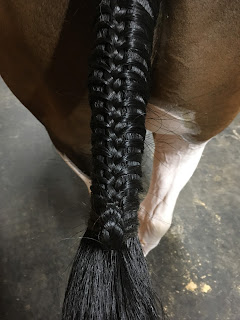 After two very late nights, I let myself sleep in until 8:30 on Saturday. It was lovely! I was grateful the pups were happy to sleep in too. And then it was off to do all the normal Saturday things! First up was a hack with Eros. 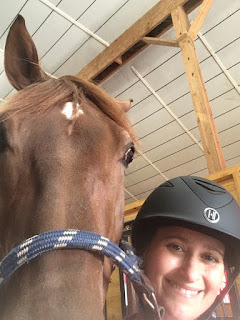 He was perfect as always, though a bit lazy. I don't really mind lazy.

And then it was back home to ride and graze all the kiddos there. I started with Pammon. He was apparently EXHAUSTED from his lesson. So he talked me into an easy flat and then we wandered the yard and ate grass. (Well he ate the grass, I was just along for company.) 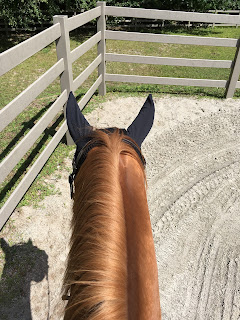 Shiny was next. I let her warm up and then did ask her to work a bit. Since she had three days off, I didn't think it was that mean to ask. She was actually super into it, and gave me some really lovely trot work complete with connection and lifted back. Who knew she could do that?! I rewarded her with a walk in the grass and some snacks too. 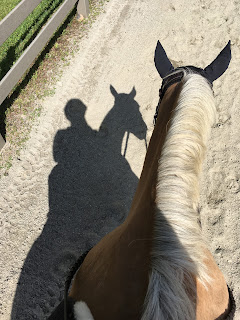 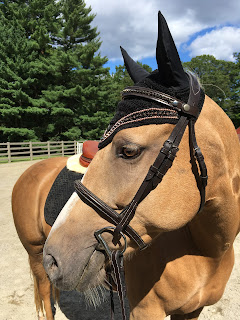 Shiny wasn't the only one who had minimal attention Wed through Friday. Rio suffered the same, and so I gave him extra long groomies and a very long snacking session outside. I even brought the treat bucket so I could park my tired butt while he ate. 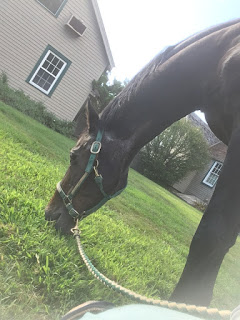 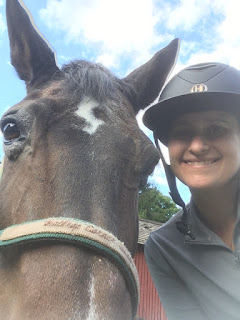 And then I opened it and let him go to town on the cookies, because I'm a cool mom. 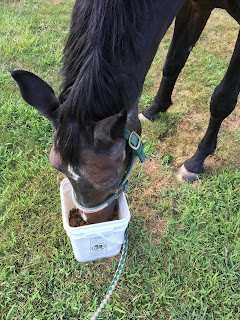 Speaking of groomies, have any of used these little face curries: 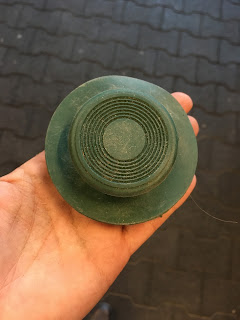 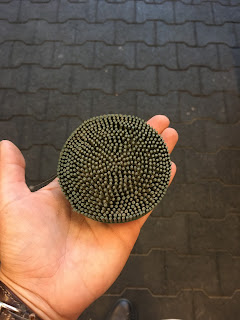 My horses all love them. I just got a couple for the boarded horses too. They run between $1 and $2. Solid investment.
Anyway, back to Sunday... Once Rio came in, I swept up, they were fed, and I went inside to hang with the pups for a few. Fed them, and took a shower. But I was starving and the local fair was happening soo... I went out and played some games and ate fair food. Also saw this awesome bunny that didn't do very well in the judging, but I wanted to take home. He was super social, and he would stand up on his back legs and wave at you if you spoke to him. 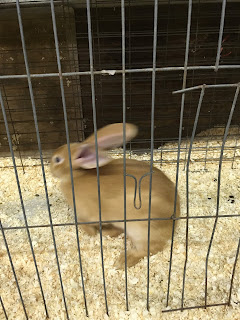 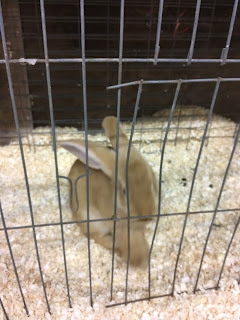 Also won a new pony.
His name is Chester, and he's my easiest keeper.

Sunday morning was lesson time with Eros! You guys. I finally had a fantastic lesson with him! Sadly zero media. But it was really great. I let go of his face and just rode him up to the jumps. In return, he stayed soft and listened wonderfully. I hope we can replicate it! And I really wish we had media. I'm going to see about setting up the Soloshot next lesson now that I have it working.

After the lesson, Eros was wrapped and tucked in for the day, and then my lesson mate and I stopped for a quick lunch. It was nice to take a midday break and refuel! Finally, I was off to my barn to play with the Soloshot and ride the horses. I did Pammon first. He was still feeling a  bit sluggish but was a good boy. We popped a couple tiny jumps too. Here is a video clip taken off my computer by phone... (Sorry, hoping to work on that...)
Shiny girl was great too, and she gave me some more of that lovely flat work. Here's another grainy clip!
My card reader for the ipad should arrive today, so I'm hoping to play around with that and get things working more smoothly. Fingers crossed please!
I was done early enough to get my lobster roll AND actually hear the band Sunday night. 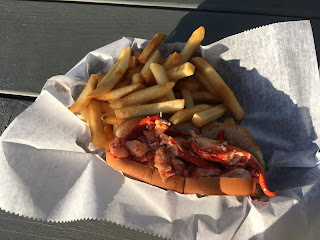 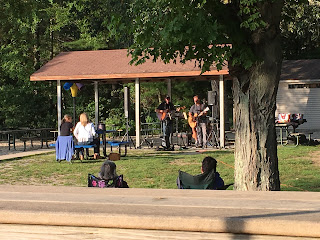 I checked the weather a thousand times and decided to give the horses Monday off. Sunday evening I was sidelined by a migraine and wasn't able to get all my chores done. So I figured a day off for the ponies so I could get my adulting done. Turns out, now it's supposed to be really nasty tonight so they may wind up with an additional day off. Ugh. We'll see. Weathermen are rarely right anyway.
Last night it was the usual, but check out this pretty sunset! 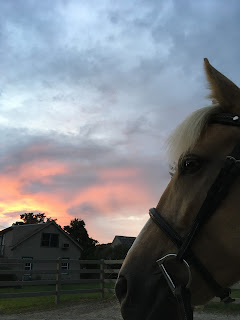 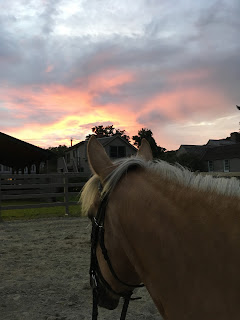 Shiny was full of sasstitude. She was kicking out at my leg and full of complaints. It was a lot cooler, and I'm starting to wonder if that's how she acts fresh. Time will tell. I think next time it's cool out, I'll throw her Back on Track mesh sheet on for a bit before we tack up and see if that makes a difference. Or maybe she's just in heat? I dunno. Girls confuse me. She wasn't terrible by any means, just had lots of opinions she wanted me to hear. I get that Shiny. I've been treating my boss the same way.

And that's about it from here this week! How was your past week/weekend? Do anything fun? Horse show or lessons? Buy anything new? OH! Almost forgot. My Winthrop Corner socks from Dreamers and Schemers arrived and they're pretty awesome. 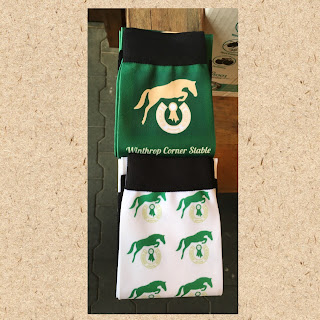 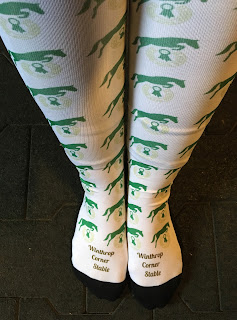 I'm getting the herd drawn digitally by Artastride (she's on insta, go find her!) and I am really excited to put those drawings on a pair of socks too. (I know. I'm not doing very well with the not buying stuff. But at least I'm buying less expensive stuff!)

Ok, this time that really is it from me. Tell me about your week in the comments!