So I had a lesson the other day with Eros, and I realized how much I've changed as a person since I was a kid. I like to think I've always been a good student. I do my best to listen and at least attempt to do what I'm being told. (I might be a good student, but I'm not always the most capable rider... Hence the ammy status!) I really don't like to be yelled at. And I don't like to be insulted. As a kid I would swallow that stuff and just keep trying. Kids get yelled at after all... Right?
But now that I'm a full fledged adult (technically... so says the law of ages being frighteningly close to 40 and all), I really have no patience for someone talking down to me and screaming at me. By all means, should I do something dangerous, PLEASE raise your voice. Get my attention. But if I pull my horse up AFTER completing a task, while simultaneously stating "I'm sorry, I can't hear you" I have no patience for you raising your voice at me and telling me I'm wasting time (especially after said yeller is the one who was 20 minutes late starting the lesson). I think it's disrespectful. 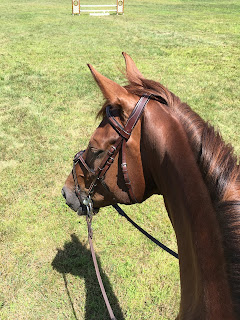 Here's what went down. Eros was weirdly quiet during the lesson. He's always quiet to flat, but normally jumping he drags me around like a Thelwell pony. I know he needs body work. I asked about a month ago and nothing's been set up. And I think that foot is starting to bother him a little. He's not lame, but he feels weak to me, and just not quite himself. I only jump about 2'6" to 2'9" in the lessons so I'm not worried he's doing too much and is why I didn't cancel the lesson. But now that I've jumped him, I'm much more confident he needs to see the vet and the body worker too. Anyway I digress....

So I had done a full course which went ok. But trainer wanted me to repeat this one three stride line on the diagonal, bending six strides to a little oxer. So I head to the three and get four. He just wasn't wanting to get to the base of the fences, and was landing really shallow. And then not responding to my leg to move up to get out. So we did the line, knowing we'd likely do it again, but it was difficult to hear what the trainer was saying because it was a windy day. I landed off the oxer and kept my canter aiming toward the diagonal to change directions. And suddenly she's like change direction over the gray gate. But I was already through the second turn and basically like three strides away from passing the gray gate. So I pulled up (not at the jump, we were passed it) and said I'm sorry it's really hard to hear you, and I was already passed the jump when you said to jump it. And she screams at me that I have to stop pulling up, and I waste so much time stopping like that.
And here is where I realized that I've changed as a person. The old me would have just kept going and let it slide. But not the grown up me. I said to her, "I having trouble hearing you. And if you want me to jump something you need to tell me before I've turned the corner to it not after." While I couldn't hear exactly what she was saying before telling me to jump that fence, I know she hadn't mentioned it until I was past the turn to it. It's not that I'm proud of myself for talking back to her, but I am glad I stood up for myself. I hear her yelling at the kids all the time and treating them like they're stupid when she doesn't always give them a fair chance to do something. And much of the time she hasn't really taught them what she's asking. I know my talking back probably just pissed her off and won't change her behavior toward anyone else, but hopefully it made her think for at least a second about how she treats people. We're paying clients. We're playing a part in keeping her business going. It's not right to be disrespectful.
What are your thoughts? Do you think I'm being overly sensitive about this? Do you respond well to being yelled at? (Some people honestly do!)
Posted by Stacie Seidman at 10:30 AM