Lol. It's been such a long week, I can't even remember what happened last week. Good thing I take lots of random photos to remind me!
I had braiding jobs Thurs through Sat for our local finals. Which is nice because everyone does manes and tails so I've already paid for those boots I ordered. Woohoo! The horses were all really good which makes my job a lot easier! 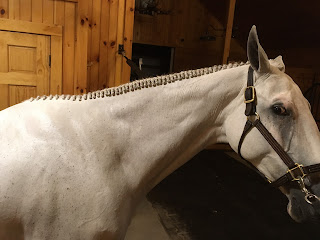 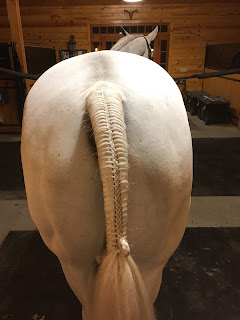 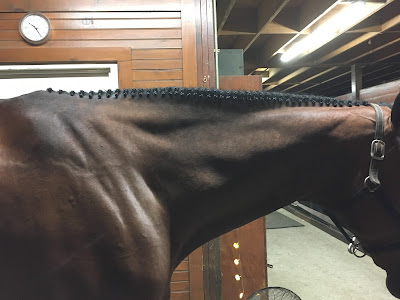 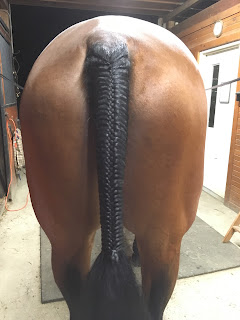 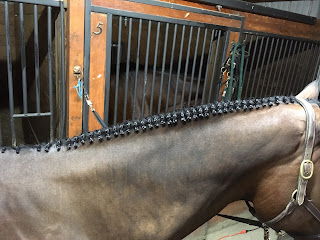 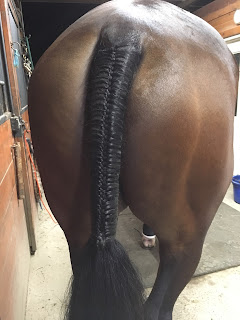 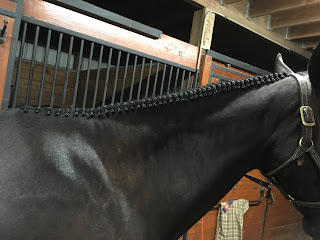 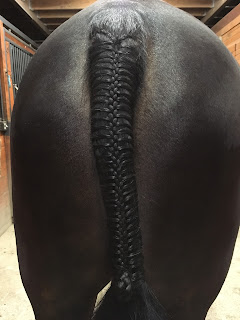 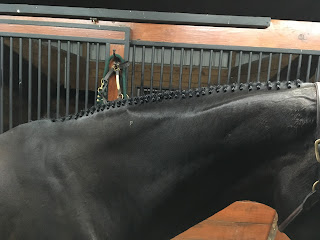 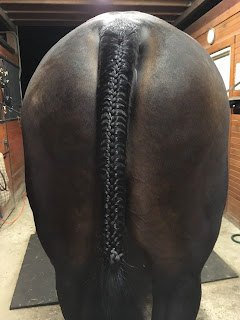 The horses have been good to ride too! I had a lesson on Pammon on Thursday. I have no actual media (sorry) but he was so fantastic! We jumped 3' which I realize is not big, but it's big for me at the moment. And he was easy. He didn't take any offense when I made a mistake that he had to fix. He's really a solid guy.

I'm excited for our next lesson this Friday. My trainer leaves for Florida on the 1st, so that might be our last lesson. Total bummer, but we'll figure something out. I'm just really excited to get going finally!
I've been working with the Shiny pants a bit more lately too. She showed me that she actually can listen to my leg, she just prefers not to. Lol. I feel that Shiny, I really do. But sorry. Ponies gotta do what they're told for like 30 minutes a day.
I had a lesson on Eros this weekend too. The regular trainer was off at a show, so assistant trainer taught us. The jumps stayed tiny, and courses were much simpler. I like to be challenged and all, but often times I finish my Eros lessons feeling very inadequate. We really haven't figured each other out totally yet, so keeping it simple gives us a better chance to have some things go well and leave with a little confidence for once.

That doesn't mean everything went perfectly... I'm still struggling with him not moving off my leg. We weren't able to get the right numbers in the one outside line to a bending. Part of that could be the size of the jumps, and I still think part is that he needs some vet/body work. Vet will be out week after this one, and still working on the body worker. And obviously, I play a big part too. Ammy rider FTW! But also... I have media! First is our fail clip...
You can see me chicken out and pull two strides away from the out of the bending. I just didn't feel like we'd get there. Of course a good rider would have made it more direct and galloped along... But chicken little isn't up to that just yet with Eros. Someday!
We did pretty well with the rest of the course though. You'll see my body awfully busy trying to use every ounce of muscle in it to get the horse moving... Also not the answer... but hey, you do what you can in the moment right?!
It was nice to see some video though. They only time I've seen us jump was some video from the Nona Garson clinic last year, and it was pretty far away and not that helpful. Props to my lesson mate for getting media!
I didn't realize how hot it was when I got home and was worried that Pammon was seeming sluggish. Then I got a heat advisory on my phone and I backed off a bit. Sorry buddy! 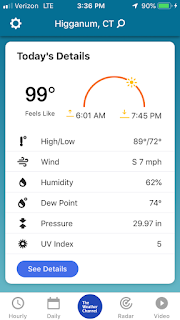 We had a lighter hack in the ring and then took a walk in the yard and he had a snack. 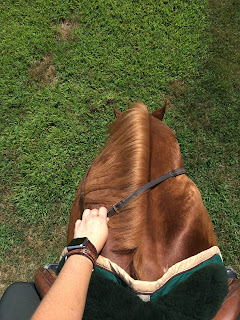 Shiny did the same. And Rio obviously skipped the riding part and went straight to snacking. 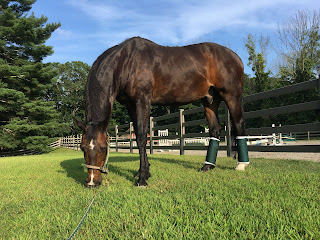 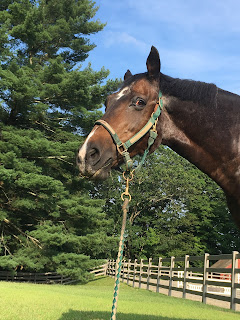 I wanted so badly to get the pups out for a walk this weekend, but with all the horsing and braiding, I was low on time. And as it turned out, the roads were too hot for pup paws anyway. They didn't mind. We did squeeze in some cuddle time. 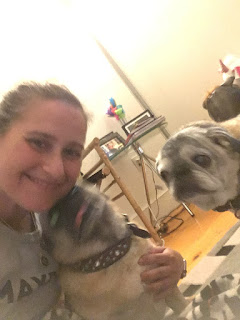 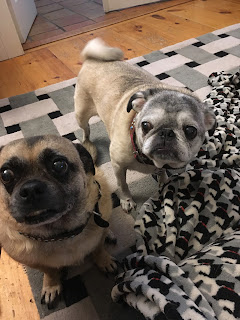 I also managed to stop by my friend's annual summer party on Saturday before heading off to braid. They have a great band that plays every year, but alas I took no photos. It was fun, and nice to do something non horsey for a little bit.

Sunday I actually made it over to the lake to hear the band and stuff my face full of lobster roll. Always a lovely time. I think there are only two or three weeks left before the season ends, so I'm trying to make it to the rest of them. 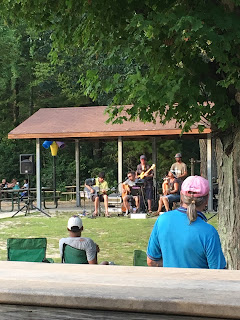 So far this week I've ridden both Shiny and Pammon every day. They have tonight off due mostly to weather. And they need a day off once a week! Tomorrow I have horses to braid, but Pammon needs to get worked because I have that lesson Friday. Not quite sure what my plan is, but maybe an early before work hack tomorrow. We shall see. I had planned to do that today with Eros, but it didn't happen. I woke up, saw it was still dark out and went back to bed. Which is ridiculous because obviously the sun would come up. And they have an indoor. I'm just really bad at 5 am.

How was your past week/weekend? Do anything fun? Lessons? Horse show? Something else? Tell me about it in the comments!