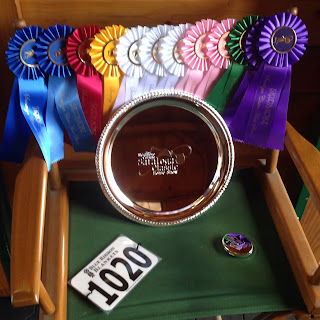 I love horse shows. I wish I could horse show ALL THE TIME! And I especially love horse shows where I feel like I know everyone. Skidmore College is my alma mater and I love coming back every year to support the scholarship fund, see all my friends, and win some pretty ribbons. 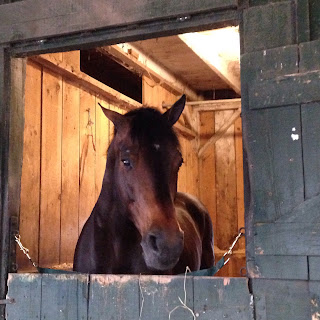 I arrived back to the horse show on Thursday, just like the week before. My trainer and I liked how our plan worked for week 1, so we did the same thing week 2: He rode first, then I had a lesson. The only difference, Jampy didn't have a lunge first. I kind of wish he had... holy strong pony! He wasn't terrible, but was definitely pulling on me and not jumping his best. I wasn't too worried about it though, it was just a practice day! (Thank goodness for those!)
After riding, I met up with an old friend from my college days. She was one of the community riders at the Skidmore barn when I was in college, and is like a little sister to me. I love that we've stayed in touch, and it's great to get to visit and catch up every year! After dinner, it was off to bed early for my 4:15 wake up. Ugh. I'm so not a morning person! 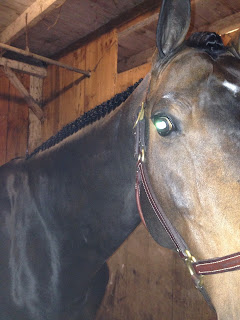 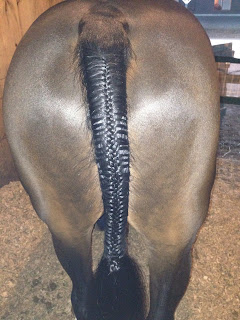 I had Jampy all braided and ready to go by 6:30 so he could have breakfast and a nice lunge before show time. Like the first week, my trainer Bob showed Jampy in a low hunter class as a warm up. It had POURED the night before and the ring was pretty muddy. I really appreciate my trainer taking Jamp around once when the conditions aren't ideal! (Yes, I've turned into that kind of amateur.) My two classes went pretty well with just a small mistake in each round. (Yep, like I said AMATEUR!) We finished 4th and 5th this time, out of about 12 horses. Not bad at all!
I spent some of the day after showing playing with Moxie. I stay with great friends when I come to Saratoga and Moxie belongs to them. She's such a sweetie! 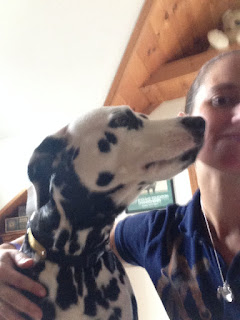 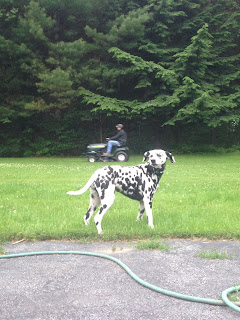 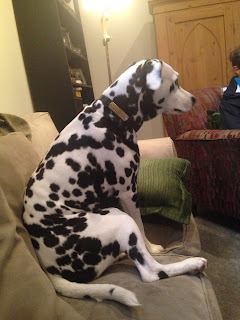 Saturday morning was another 4:15 wake up. Seriously. Ugh. The things we do to horse show! This time I put on my big girl pants and rode my own horse in the low hunter class. And I mean BIG GIRL PANTS because it was FREEZING out and Jampy was feeling a little sassy. It went fine though. We were a little too tight to one jump, and had a late change, but since it was practice, I wasn't too upset about it. (We finished 7th of 9). My adult classes went much better though! No missed changes, and I found the jumps pretty well. 6th in the first class and 3rd in the other out of 12. I was really proud of that yellow ribbon! Good boy Jampy. 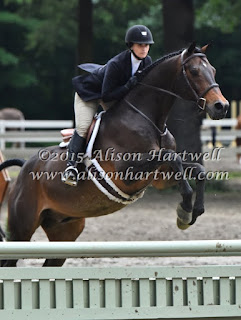 We had a small break and then a couple more classes around 1 pm. These two classes are just for fun and are only held at this particular horse show. They are alumni classes open only to riders who attended Skidmore College. In years past, LOTS of people participated, but the last few years attendance has been low. There were only three of us this year. Jampy was perfect and we won both classes! Just for fun, I added some bling to his braids, and some wraps for his legs that are Skidmore colors. We like to play dress up! The beads in his tail actually spell out Skidmore, but I didn't take a good enough photo. Sorry about that. 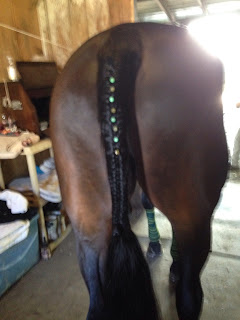 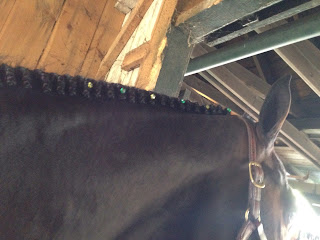 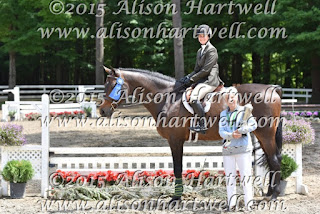 Once Jampy was all tucked in, it was time to head up to the ring to watch the big class! I had a few friends competing in the grand prix, and was excited to watch. It was a $25,000 class, but was somewhat poorly attended with only 9 horses competing. I'm sure the horse show was disappointed, but I was kind of happy because I was pretty tired! 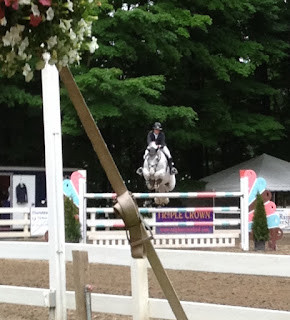 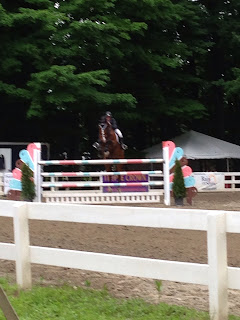 That's my friend jumping her two horses. After college, this amazing rider was just a little kid at the barn where I kept my horses. I'm so impressed with the rider she's turned into! Unfortunately, she had a rail down with each horse. But she still finished in the ribbons and won some money back. So not a bad day for her at all!
Jampy was all done Saturday, so Sunday we just packed up and headed home. I'm so happy with his performance the first time out this year! I can't wait to get back out there!

Now that you know all about how the show went for Jampy and me, I wanted to tell you about the horse show, and also show you the grounds a little bit. This is a big A show, meaning that they give a certain amount in prize money and horses/riders get the highest tier of points toward year-end awards. It is not however a HUGE horse show. There are only three rings running: 1 jumper and 2 hunter rings. And it is held at the Saratoga Race Course. At least it was. This is likely the last year as they plan on relocating to a more exhibitor and footing friendly locale. The amount of participants has dwindled over the years, mostly for two reasons. First, when it rains (and it always rains!), the footing here doesn't hold up well. It gets slippery which can be dangerous for the horses. Secondly, we stable in the race horse barns by the main track. They are across the street from the show grounds. The distance from where Jamp was stabled to the ring was a half mile. And we were in one of the closest barns! It can be tough if you have many horses going one right after the other, to get to the rings on time with that much of a commute.
So the plan is to build a brand new show grounds on a large piece of property that the college already owns. Here are the new tentative plans: 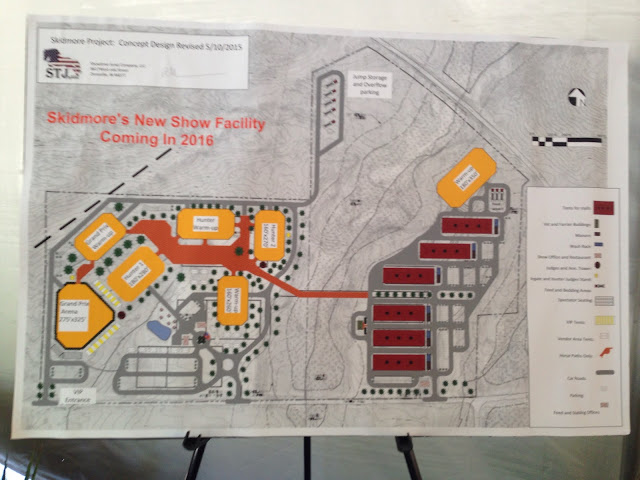 It looks like a great idea, so hopefully the competitors will come back and give it a chance! This is one of my most favorite horse shows, and I hate seeing it decline in numbers every year. Not to mention it raises so much money for my alma mater!
Ok, enough rambling... Here are some photos of the horse show!
Stable side: