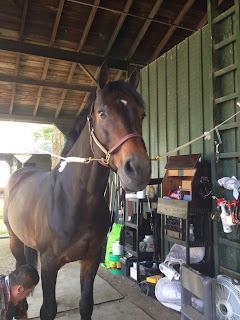 So I want to do a proper horse show recap at the end of the two weeks, but in the meantime, I figured I'd give a quick report from the first weekend.
I arrived on Thursday and Jamp had already thrown a shoe... Why not right? But the farrier put it back on before I even got to the show grounds, so all was well. I had a lesson in the afternoon, after my trainer gave him a little school for me. It had been raining the days (yes DAYS!) before I arrived and Jamp had only been lunged and hand walked. Hence the thrown shoe on the lunge line Thursday morning. I figured it would be beneficial for all of us if my trainer got him started. 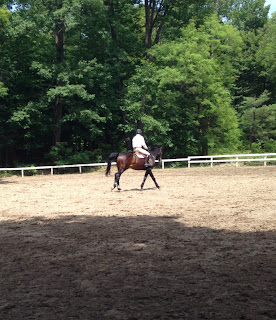 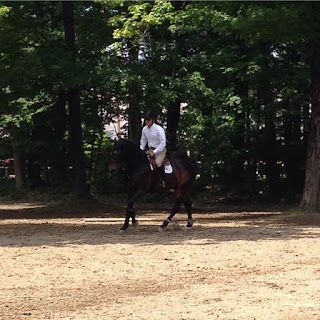 I think it was a good choice as Jampy jumped great for me in the lesson.
Friday was show day for us! It was supposed to be a lovely day, maybe partly cloudy... But then it rained. OH DID IT RAIN. But only for the half hour that I was on the horse. Of course.
Jampy was not appreciative of the inclement weather, and jumped like the above photo at best... Ugh. He still wasn't last in any classes though, so I suppose that's good! We finished 5th and 7th and opted not to do the under saddle. He's not a great mover. I kind of wish I had done it though, there were only 5 that came back for it.
Saturday was the remainder of our division and we showed first thing. 7:30 AM start time! Which meant a 4:00 AM wake up for me to get there and braid first. 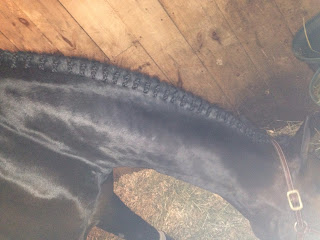 The ring was pretty muddy for Saturday's classes, but the sun was out. Jampy jumped GREAT! Unfortunately the photographer didn't bother taking a single photo from our classes. Boooo. We finished with two fourth place ribbons that day. Good pony Jampy. It's tough for him in the hunters since he's more of an equitation horse, so I'm proud of him for finishing in the middle of the pack.

I know you're all DYING to know which boots I wore in the show. I went with the Parlanti's. They're now officially initiated as horse show boots since they've already endured rain and mud. Sorry boots...

I can't wait to head back up on Thursday for week two! I'll try and remember to get more photos of the show grounds and race track for the full recap. This is supposed to be the last year for the show at these grounds, so I really want to show you all how beautiful it is! There are many limitations to the current grounds, which is why they are moving. But it really is a beautiful location.