Outfit Day!!!!! You guys won't believe this, but my horses had Wednesday off AGAIN. So I didn't have a riding outfit for you. BUT, I feel guilty doing that two weeks in a row, so I'm offering up a flat Stacie. It's bootless, but it's better than nothing. Here's what I'll be wearing tonight:

Have you guys seen this one floating around Facebook? I saw it while feeling cold one evening and decided to buy it. You can pick from a handful of colors, but obviously I had to get the hunter green version.

These were on the 50% off table at Beval when I was in VT this summer. We have discussed it before, but I'm totally into the denim breeches right now. I like that these are gray. Being a different color justified my splurging on them. Kind of. Hey, they were half off! Stop judging. Ok judge.
Anyway, that's what I'm wearing to ride tonight, along with my Tuffrider Regal boots most likely. And here is what I'm wearing at work today. Spoiler alert: It's super retro!

I'm bringing the 80's back. It's time my friends. Also note the short kids in the back ground. They love outfit day too!

You've definitely seen this a gazillion times by now. It's a favorite of mine. I love the gold zippers on the sides. And also that I can wash it in the machine.

Moto jeans! I found these on Zulily and have been waiting to wear them. I feel like moto pants are more a fall/winter thing. I have no idea why I think that. But I'm excited to finally break them out! And yes, those are indeed zippers at the ankles. Awesome 80's pants for the win!

These booties have a backstory. When I was a small child (I think it was first grade in fact) I had a pair of low boots almost exactly like these. They were real suede, and had fringe stepping up the side. The heel was a bit lower than these are obviously because I was a small child, but otherwise they were so similar it's crazy. I LOVED those boots. I wore them every chance I got. I was devastated when I finally outgrew them. And then I saw them at Marshalls a few weeks ago. I was like NO! My favorite boots! But then my favorite boots were $70. At Marshalls. Wahhh. So I didn't get them. I kept thinking about them though, much in the same way you think about that crush you have... I started an internet hunt to try and find my beloved booties in a more reasonable price range. You guys, they were MORE EXPENSIVE on the internet! $120! What? No. Just no. So I went back to Marshall's with my tail between my legs and bought the booties. Because nostalgia my friends. Nostalgia hit hard. But here they are, and I love them. 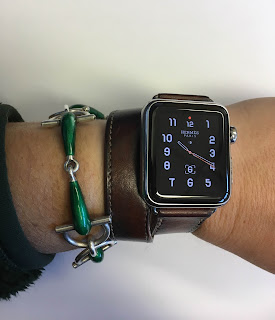 I have a lot of confessions on Thursday's Threads today it seems... First up is one of them. I have a small obsession with vintage Gucci. (Not a secret.) So one day I was hunting around on Facebook using the search words Gucci, green, and bracelet. (Hey, I know what I like!) And this beauty popped up. It cost a small fortune so I added it to my watch list and proceeded to scour the internet for a cheaper one. To no avail. Long story short, I caved and bought it about 2 weeks later. No regrets! Hey, I haven't horse showed all year. I can blow some money if I want to. (No, actually I can't. But I did anyway.) Also on the wrist is my trusty apple watch.

Righty is also sporting some vintage Gucci, but that one was in the $35-$40 range. More my style... The other bracelet is super fun (I loved mixed media jewels!) by Ettika.

That's what I'm wearing today! What do you have on? Any fun nostalgia pieces in your closet? Tell me about it in the comments!