An ode to Bruce 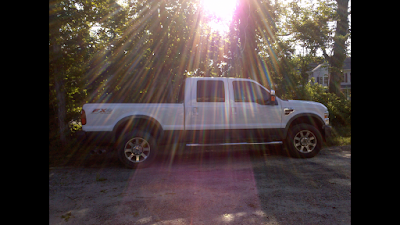 For those who may not know, Bruce is my truck. Well, technically Bruce is my dad's truck. Or if we're splitting hairs, Bruce no longer belongs to either of us...
I brought Bruce in for some service a little over a week ago and was told he was in bad shape. I was quoted $9500 to fix him. My dad and I have talked about trading in Bruce since we sold our company earlier this year. He said I could have him as a down payment for a new truck, and we both decided after Bruce's recent diagnosis that now was the time. So this past Thursday, I placed an order for my new truck. But I had to turn Bruce over that day. (Despite his need for repairs, I did manage to get half of what my dad paid for him back in '08 for a trade-in. Thank goodness.) It might be silly, but I get pretty attached to my vehicles. And thus, I thought Bruce deserved a flash back post. Sit back and enjoy!
I met Bruce back in 2008. I had been hauling with a GMC Sierra 2500 single cab gas truck that belonged to my dad. It was also a work truck. In other words, it was a base model with nothing fancy inside. Not even power windows. But he was a sturdy truck and taught me well about pulling a trailer. A few years after getting that truck, my little brother wanted it to have for his tree business. Diesel fuel price were through the roof, so it was a great time to buy a new diesel truck (but not really to actually drive one...) Dad bought Bruce and essentially gave him to me because he didn't want such a nice truck to get abused at work. It was love at first sight for me and Bruce. He was a Ford F350 Lariat with all the fancy stuff inside. It was quite a step up from my little Sierra. And Bruce hauled like a dream! Even with two fat warmbloods in the trailer. A few years after getting Bruce I traded my little eclipse in for a new car that happened to be rear wheel drive. Bruce became my winter vehicle in addition to pulling the trailer for me. He was a good guy that Bruce. So now that you know his story, let's look at some photos from our eight years together.

Bruce pulled Tina the trailer to countless horse shows. They made a great team! 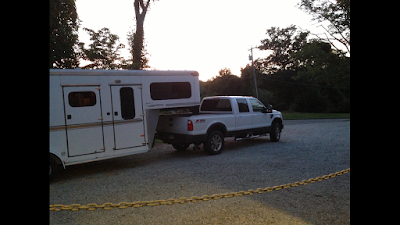 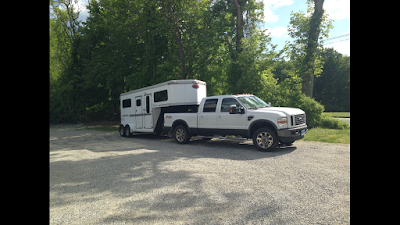 One of most memorable trips though, was when Bruce safely carried Rio and I to Cornell when he was so sick with EPM. Bruce handled the trip perfectly, despite the rain and snow we encountered on the 8 hour drive.
In more recent times though, Bruce and I had some troubles.
The day before leaving for New England finals last year, his alternator went when I was attempting to pick up my trainer's horse to take with me the next day. Bad Brucey! 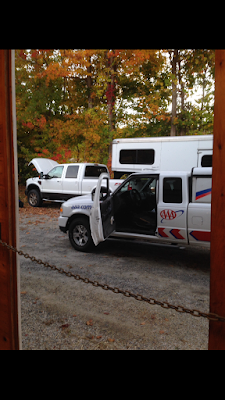 At first we thought it was the battery, but AAA came out and said nope, not it. So he had to get towed.
Thankfully with the assistance of some of my coworkers, the mechanics were able to get Brucey patched up and on the road with enough time to make the warm up! Phew! I forgive you Bruce.
Later that winter though, he stalled in the middle of the road on a cold day. And back on the flat bed he went:
It was right around this time I started thinking maybe it was time to let Bruce go. I mean, as much as I loved him, he's not my husband. He's a truck. If a truck lets you down too many times, you're not obligated to work it out. But I was dragging my feet because trucks are expensive. Since I didn't end up showing this year, Bruce sat around all summer. Until last month when the battery in my car died. I took Bruce back to work instead and got this: 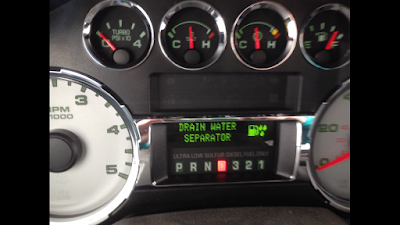 Not a terrible warning, usually this is simple to fix. A coworker of mine emptied the water separator for me, but the light didn't go away and I couldn't drive any faster than 35. So that wasn't good. This is what brought us to the Ford dealer about a week ago.
My dad came with me Thursday to order my truck for three reasons. 1) He owns Bruce, so he needs to sign him over. 2)He still has my money in  his account. 3) I needed a ride back to my car at work. But the best part about him coming with me, is that he could take one last photo of me and Bruce.
Obviously first I needed to take a selfie of our kiss goodbye.
And here's our last photo together after I cleaned everything out of him. He had a lot of stuff hidden in there! There were no less than 9 pairs of gloves inside those bags.
And so ends my ode to Bruce. He will be missed dearly. Especially since my new truck won't be here for eight weeks. Please join me in begging old man winter not to drop any white stuff before then and for the equine to stay healthy so we don't need to find an emergency ride to the hospital.

Bye Brucey, thanks for everything! I'll miss you! 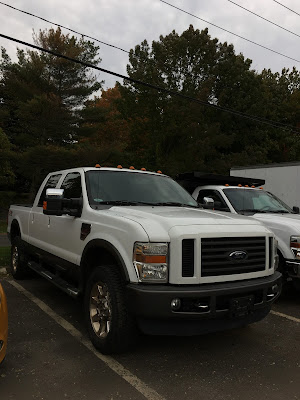 Posted by Stacie Seidman at 9:44 PM