Oh man. I am THIRSTY! I'm (semi) observing Yom Kippur today which means I've been fasting since dinner last night. No food, no drink. Which also means no COFFEE. So if this post makes no sense, this is why!
Anyway, you're not here to read about fasting. So let's look back at the last week. On Friday it was a full week without Rio. And it's been weird. Certainly not easier yet, but I've been keeping quite busy, so that helps distract at least.

Rio's ashes came home on Thursday, and I've been planning what to do with them (and Jampy's since he's still sitting on the bench in the barn too). I think I'm going to make a shelf up high in the barn for them, and underneath the shelf will be photos of them. Or maybe a painting of each of their beautiful faces. We'll have to see what I come up with!
In other horse news, I had a fantastic lesson on Eros Sunday morning. It was kind of split up as the farrier arrived just as we started jumping to tighten up his front shoes. Eros has a really tough time with his feet in the fall and we're trying hard to stay ahead of that this year. We don't want what happened last year to repeat!
Anyway, got the feeties fixed up, and went back out to re-join my group. I'm not sure if you remember but prior to getting his hocks and stifles injected we were really struggling in our lessons. I couldn't get down the lines, which was super weird for him. All last year it was everything I could do to not take out strides. So adding was bizarre. Now that he's all caught up on maintenance though, I have my horse back! He just walked down the lines, easy peasy! And only once did he yank me out of the tack on landing... I guess I have my whole horse back, pulling and all! Lol! Honestly though, I think he does that when I get to pulling too much without leg to back it up. The answer, my friends, is ALWAYS more leg.
Not much to report at home. Shiny's been good, though LAZY and Pammon is handling his stall rest mostly well. I don't really feel like that leg is healing, it's still puffy when I change his wraps. But it's only been a few weeks, so I'm trying not to fret about it.
It's been cold at night, dropping down into the lower 50's, so the kids finally wore their new sheets. I bought these months ago, and so far really like them. They're from Blue Ribbon Blankets. 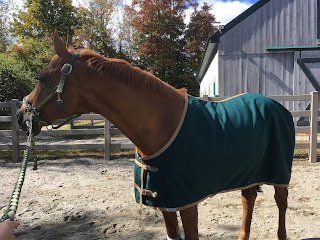 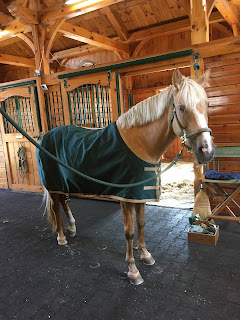 Speaking of cold... Last Friday my friends and I managed to snag some tickets to the first game of the playoffs! 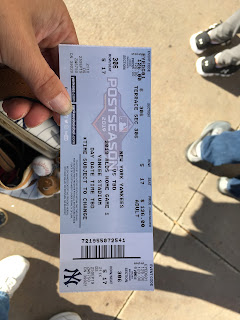 Yankee stadium was electric! The atmosphere was definitely different than a normal game, and you could feel it the moment you got through the gates. But it was also freaking COLD! 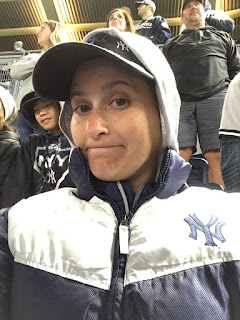 Fortunately, I was prepared with lots of layers. And they had hot cocoa. I would totally go again should the opportunity ever arise. The stadium was sold out, and it looked like every seat was filled, at least for the middle of the game. Our seats were pretty high up, but no complaints. I mean, it was the playoffs! The game was exciting. Not too many home runs, but great plays. At one point, the Yankees stole two bases AT THE SAME TIME! Nuts. And they won, so icing on the cake, right?

Not much else to report on really. I got to ride Shiny Monday, but last night I had a family dinner to kick off Yom Kippur, so they had the day off. Now it's raining, and isn't supposed to stop until the weekend. We have our annual end of season weekend on Nantucket then, so looks like Shiny and Pammon are going to be REALLY bored for a few days. I'm hoping maybe there will be a break in the storm this evening so maybe we can dodge some raindrops and get them out. But it's not looking good!

How was your past week/weekend? Do anything fun? Lessons, horse shows... SHOPPING? Tell me about it in the comments!
Posted by Stacie Seidman at 4:27 PM