Ahhhh! It's finally feeling like Spring around here! Yesterday we hit 80 degrees which makes me ridiculously happy. Obviously, that's a little warm for this time of year, and it won't last, but I really enjoyed it. Today we'll be in the 70's, so no complaints. But the best part about it getting warmer out finally? I'm riding! My own horses! What a novel concept.
I haven't quite reached consistent every day riding because we've had some serious rain and Passover happened too. But I'll take whatever I can get.
This weekend was a busy one. I had a bridal shower to attend on Saturday at 1 and a baby shower on Sunday at 11.

Both parties were right smack in the middle of prime riding hours, but you know, you do what you gotta do. The best part about having horses at home is that I can work around these things. I couldn't ride before the parties since the horses were having their turnout out then, but I was able to ride after both days.

The good news is, the winter break didn't seem to leave us with any set backs. We're right about where we left off in the fall. The bad news, it didn't magically make my horses more sound or more broke. Bummer.
Jampy has started the season off acting like the mature individual he ought to be for an 18 year old. I haven't quite made it all the way to the scary end of the ring just yet (soon though, I promise!) but he's been soft and hasn't been overly spooky. At least not when I get on before dusk. Old man really hates the dark!

Obviously, since he's been ridden all of maybe 6 times this year, I haven't jumped anything yet. But I'm getting really itchy to get back to it. We cantered a poll on the ground a few times on Sunday, so maybe this weekend we'll pop over some baby jumps. He's still feeling weak behind, like he was all last year, but that's not surprising given the time off. He's also due for spring maintenance. Hopefully we can get him a little more sound this year so maybe we can get one more show season in together. I'm not sure how much longer I can keep asking that of him given his age.

I've honestly only sat on Romey once so far. Saturday was dark by the time I got to him and that's no place to start him back! So Sunday was our big start. He's a challenge for me because he's so wild from sitting around all winter, and he won't lunge for me. I won't say he doesn't know how, because I don't really know that for sure. But he won't do it for me! So I strapped some draw reins on in case things took a turn. Fortunately, he was a pretty solid citizen. Something still isn't quite right behind on him either, so he's on the list for the vet too.
I'm in kind of a conundrum with Romey. I don't really want to sink a ton of emotion, time, and money into him if he's not going to stay sound. On the other hand, I think there's a pretty fancy hunter stuck inside there. And also, what do I do with him if he's not going to be a riding horse? My place is not set up for a horse that doesn't work. I'm on a busy road so they can't be out when no one is home. And turnout for a couple hours a day isn't enough if that's all he's getting. So these next few months and vet visits will have to help me figure things out for him.

I haven't actually ridden Rio yet. I figure he should get some exercise on the lunge before I ask him to tote me around. He's been so wonderful though! He looks fantastic! Well he did... Last night he looked a little off on the left hind, but I have a feeling he just overdid it while playing in turnout. He got a steroid shot when the vet was last out and he's been showing off his stallion skills during playtime. Kids....
Sunday I had him lunge with tack on just to see his thoughts on that. He didn't mind too much. He's always been girthy which showed itself when he first was getting going, but otherwise the tack didn't bother him at all. And I just can't get over how excited he gets for the bridle! He literally puts it on himself. I showed it to him, he opened his mouth and shoved his face into it. So cute! When I first got him, back in the stone age, I had to get someone tall to help me bridle him. Funny how things change, isn't it? 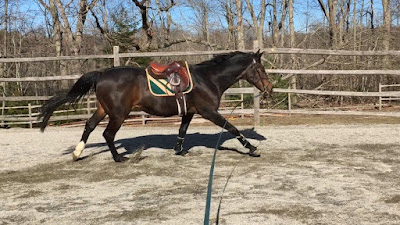 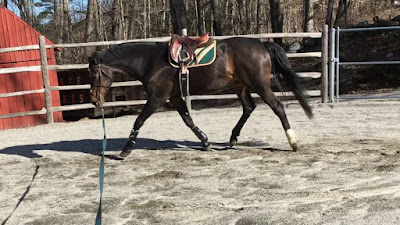 I promised the pugs we would DEFINITELY go for a walk on Sunday. I had to rush a bit in the barn to make that happen, but we got it done. They were so happy to be off the farm for a little bit!
In order to get the puppers out for their walk before it got dark, I had to pause the barn chores. I fed the horses their hay, and blew the aisle quick before we went. Once we got back I had to finish up. Since it was so nice out, I brought the dogs with me and tied them to crossties while I fed and did the final sweep of the floor. P is always pretty good in the barn, but Artie likes to bark at the tall kids. He actually did settle down this time for awhile. But anytime a horse made a noise he'd start up again. Some day he will be a barn dog... maybe.

Despite the beautiful weather on Monday, I couldn't ride after work because we were having our Passover Seder at my mom's house. I was totally bummed I couldn't ride, but it was a lovely meal with my family.


And my niece looks like she's getting ready for a pony...

And that is what's up this Wednesday! What's up with you?
Posted by Stacie Seidman at 4:11 PM