This was one of those weeks that seems SO BUSY, but when you look back at it, there doesn't seem to be much that happened out of the norm... How does that work?! Let's start with horses and my annoying non-encounter with my newest ex-employee.

-Horses
This was kind of a slow week for the horses. I mentioned last week that they had some vet work done on Monday. That resulted in hand walking Tues, Wed, and Thurs. Light riding Friday for Jamp and Ducky. Duck was allowed back to regular work on Saturday. Jamp had an extra light day and went back to work Sunday.
Jamp's having some trouble sweating which is of some concern. As per my vet's instructions, he know gets a Guinness with dinner because for some reason dark beer helps with this issue. I call it beer mash. He loves it! But I digress... Due to the non-sweating, I need to be mindful of how hot he gets. Walk breaks seem to help, and it's been on the cool side so that's also good. He jumped a few tiny jumps Monday, and I'm hoping to jump around some larger tiny jumps tonight. 2'6"-2'9" is my plan. We'll see how that plays out.
Ducky has earned himself a gold star this week! He's been coming out and working happily. He's been QUIET, and relatively non-spooky. He did however, have a high Lyme titer. So I'm not certain that he's really come around to being a good hony, or if he just has the right amount of Lyme Disease coursing through his body to keep him calm, but not lame. Hard to say. I guess once the meds kick in I'll find out! I'm hoping for the former though. Since he's been such a happy boy, we got a little adventurous and jumped through the baby combination in the ring. It's not really set for such teeny "jumps" so the striding didn't work out very well, but he was so brave! He used to try and stop the first time at any new jump, but he didn't even think about it this time. He just went right through like he knew exactly what he was doing. So proud of the little guy!
Before I whine about my ex-worker, here are some adorable photos of the boys from this past week:

So about my newest ex-worker... I hired this guy, who is married to a girl that I used to ride with long ago and far away when I was a boarder. (Follow that?) He came by two weekends ago for his interview, and he seemed like he'd be a great barn worker. Lots of horse experience and liked things clean and tidy the way I do. He couldn't start Mother's Day weekend, but was set to start this past one. He wanted to arrive on the earlier side, which was fine with me. The earlier he arrived and got to work, the earlier I would get to ride afterwards! Sadly though, that meant I had to get my lazy non-morning-person-bum out of bed early. I like to work alongside new helpers so they understand and see how I like things done. I got up at 6 and at 6:10 received a text that he had been up with food poisoning all night and wasn't coming. Ugh. I had arranged my whole weekend around training him Saturday and leaving him to his own devices for Sunday. But food poisoning is no joke, so I said to feel better and got on with doing the barn chores. When I went on Facebook however, there was my worker tagged in a bunch of photos from a charity walk. Suspicious for sure, but maybe by that time he was feeling better. I tried to brush it off. Sunday rolled around and I once again got up early to meet with my new worker. I went out to the barn at 6:30 when we were supposed to meet, but decided to hold off with starting anything until he arrived. Well... I waited until 7:15 and he still wasn't there. So I fed the horses. At 7:30 I sent a text that said I wasn't sure if he was planning on coming, but really I didn't think it would work out. I never heard back.
Now I know, maybe he was just running late. But to not check in at all is pretty unprofessional. And honestly, I need to be able to trust this person to take care of my kids horses! I was feeling zero trust at this point, and figured it best to cut my losses. And thus is the story of my non-encounter with my newest ex-worker.

-Pugs
The pugs are as cute and happy as ever. They got new harnesses for walking this week. We tried them out Sunday evening (after my 12 mile run, doing the barn chores, and riding) when we went for a 1 mile walk together. It was glorious. The new harnesses actually stay put, and P can't pull out of it! (She's a Houdini.) 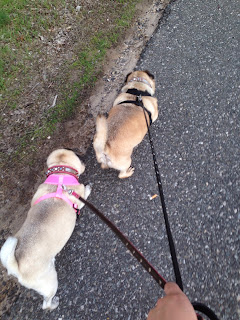 -Running
It was a so-so week for running... Vanessa was out of town so couldn't meet up for our Thursday run. I decided to push the run to Friday. And then I was lazy so it would up being very short. 2 miles that should have been 3. Oh well. Better than nothing! You've already read all about my 12 miler on Sunday. I like to get a couple days off after a long run which would mean this morning should have been my next 3 miler. Yeah... Should have. I got up late and ran 1 mile on the treadmill. I'm not even sure that's better than nothing. But it's something I suppose. I have to see if Vanessa is planning to run tomorrow morning. If not, I may go Friday morning instead. No more excuses, must run a real distance! That half is getting closer by the second! 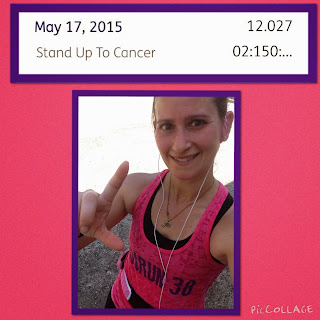 -Other stuff
There hasn't been much time for other stuff lately. I just received my May Blueberry Cove box and I haven't even crafted with the April box yet! I need to get some new jewelry put together for Spring and Summer!
I know you were super worried, but fear not, I've caught up on the laundry ;)! I then had a mountain of it sitting on top of the dryer waiting to be put away, but I tackled that job last night.

That's what's up with me this Wednesday! What's up with you? Have you been riding much? Getting your runs done? Do you know anyone who might want to work in my barn on the weekends?! (No seriously, do you?)
Posted by Stacie Seidman at 4:03 PM