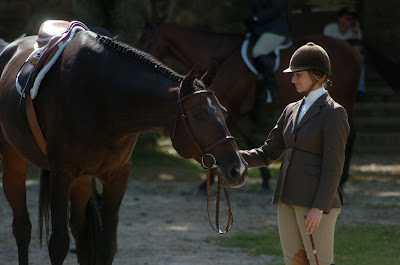 I love reading everyone's responses to the monthly questions posed by Viva Carlos, so I'm joining in the fun too! Here goes...

How old is the youngest/greenest horse you’ve ridden?
I think the youngest horse I've ridden was 3. The greenest I've dealt with was a pony that I had on trial. I wasn't informed of this, but she had only been under saddle for two weeks when she came to my barn for me to try. After a few days off, (remember I had no idea she was THAT green) she bucked me off while I was mounting and broke my nose. Needless to say, I didn't buy that one. 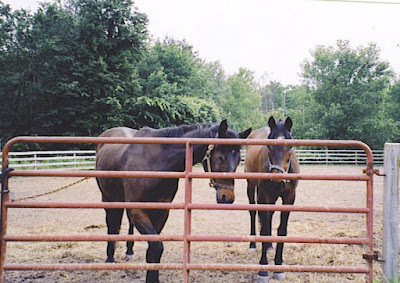 How old is the oldest horse you’ve ridden?
We had some pretty ancient school horses in college. The oldest was a horse named Cajun (he's on the right in that picture right above here. He was a thoroughbred who had raced, then became a polo horse, and finally wound up at my college as a lesson horse. He was a saint. When I knew him, he just did beginner flat lessons. He did the beginner classes at the home shows too, so a few times I warmed him up. We always thought he was in his late 20's but then we looked at his tattoo one day and realized he was either 8 or 34. And we knew he wasn't 8. I think he was 36 when he passed away.

Were you scared of horses when you first started riding?
A little? I was kind of scared of falling off, and I was definitely respectful of their size. Where I started, the quietest most wonderful beginner horse was 14.3 so I didn't start on a little pony.


Would you say you’re a more nervous rider or a confident rider?
I'm a chicken little. If you read my blog you definitely already know that about me! But I will say, that on the right horse I can be very confident. Rio and I had some pretty bold jump offs in the low amateurs!

Biggest pet peeve about non-horse people around horses?
Not listening or trusting in what I tell them. Romey bites. He's not friendly. (And before him Ducky was the same way.) So when I tell you not to stick your fingers in his stall to pet him, please don't do it! And especially don't stick your face in there to kiss him! Sheesh.

A time you’ve been scared for your life?
When Ducky first came to me, he was skittish. He had clearly been in a bad situation and his response to being uncomfortable or afraid was to challenge me. One day, about a year after I had brought him home I was picking his feet in his stall. Like I had done every single day since he came. But something I did or the way I moved upset him and he pinned me in the far corner of his stall. I had no escape, and I thought for sure he was going to kick me. (Because he would do that...) Thankfully, he let me go. And I mean that. He decided it was ok not to kill me that day. But he might have had it been sooner in our relationship. Freaking scary you guys!


Have you ever fallen off at show? What happened?
Um... more times than I can probably recall! Stop me if this gets too long! 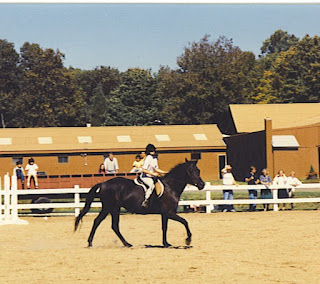 My very first horse show that wasn't a schooling show at home, I fell off, not once but TWICE in the schooling ring. My horse was not very honest though I learned later that he didn't see well. So he got up to the jump which maybe he couldn't see, who knows, and ducked out. I was about 4'8" and he was 15.3 hands so my attempts to cling were pathetic. 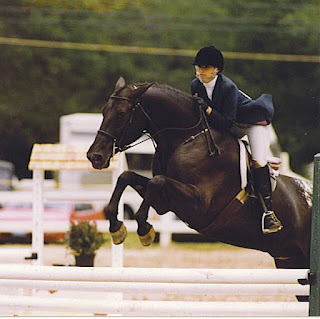 When I was 11 I had an appy I did in the children's hunters. He was pretty perfect all of the time. But one day while doing a warm up, I asked for a long distance into a line. He took it but for some reason forgot a leg. It was a tiny jump, maybe 2' so it wasn't like he had time to rotate, but we both went skidding on our faces. 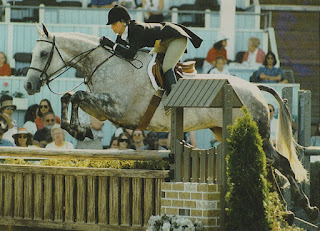 I went to Devon once. I think I may have shared this story before. I was doing the junior hunters, and my horse wasn't quite himself the first day. His normally enormous stride was really short, and he wasn't making it down the lines. Apparently, my answer to that was to gallop, not get there, but jump up to his ears anyway. He took the safer option of not going, but I catapulted myself right through the jump. Jump crew had to pick me out. 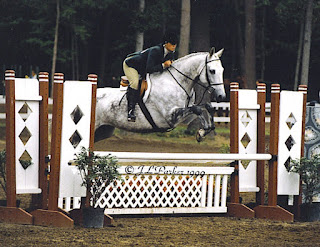 One time at Saratoga I was showing one of our lesson horses (we had insanely nice lesson horses at Skidmore). We were out starting to school in the warm up ring over a tiny little cross rail. Well I still to this day have no idea what happened, but he didn't unfold his legs one time and just landed on his face. Me too. So odd. We were both fine and continued on with the show. 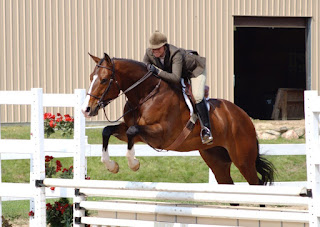 When I first moved back home after college, I had a fun project horse to play with. He was a four year old ottb and I did him in the adult hunters and pre greens. One day, on my birthday, we were doing a little 2'6" thoroughbred hunter class. Well I was on my way to the first jump, when he very suddenly spun out from under me. I held on for awhile with my right leg just barely hooked over the saddle. But I couldn't get my balance to climb back on. Wasn't much of a birthday gift! 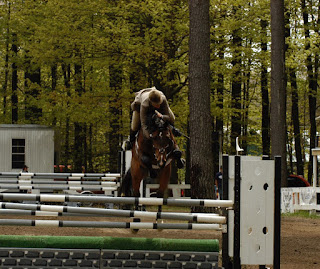 My very first amateur class with Rio I did almost the same thing I did at Devon. (Do you see a pattern?) I jumped into the very first line which was a bending seven. This was a jumper class though, so if I did 8 that would have been fine. But instead I let him bulge out so the seven was too long. Rather than wait for the 8, I launched myself up to his ears at stride 7. Literally. I pulled the bridle off while falling. 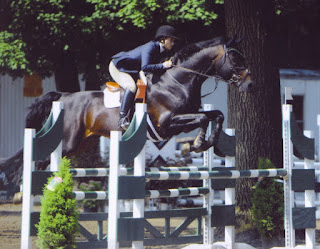 Ok, last one, though there are plenty more... One of my first real jumper shows with Jamp was at Saratoga. The jumps were a pretty solid 3'9" and we weren't as prepared as we should have been. Anyway, I came around a turn to an oxer, didn't quite get his eye on it, jumped ahead and got jumped right off.
Now the funny thing here, is that I very rarely choose the long distance. And nine times out of ten I will get left behind rather than jump ahead. But it seems that one time out of ten always really does end in disaster.

What’s a breed of horse you’ve never ridden but would like to ride?
I would love to sit on a Paso Fino some day! 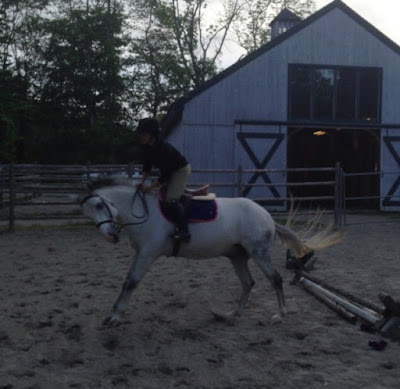 Describe the worst behaved horse you’ve ridden?
I've ridden some naughty ones... ahem Jasper... Who could rear, buck, spin, spook... (I hate all of that crap, remember I'm a chicken!) But the worst behavior I've come across was definitely, hand down, without a doubt Ducky. He would plant his feet and refuse to move. FOR HOURS! OMG. SO BAD. 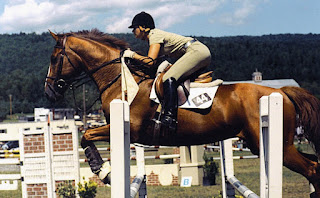 The most frustrating ride you’ve ever had?
My horse Cosmo was an amazing teacher. He could jump ridiculously high, but he was really unorthodox and not at all careful. But I had been working REALLY hard with him all summer. Taking lots of lessons from some big name professionals. We had been getting better and better in the show ring, even making the jump-off and getting ribbons occasionally. I was heading into the ring for out last class of the summer. It was an adult jumper Marshall & Sterling classic. I felt SO CONFIDENT in both myself and in Cosmo. We were ON IT! We schooled great. Well, I went in the ring, and he just threw his feet at every single jump. I had like 4 or 5 rails. It was so upsetting because it wasn't how I wanted to end our season. And I really had thought we were there and ready to be successful that day. I gave him a good ride. I held up my end of the bargain in the ring. Cosmo just couldn't that day. Horses, man. Horses.