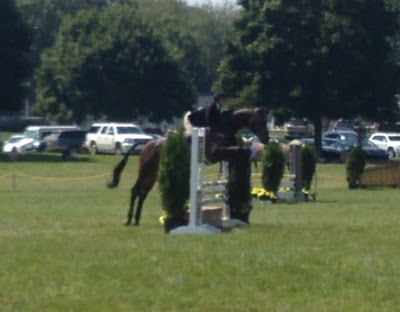 I was super excited to not be showing first thing on Finals Day. I was planning to sleep in all the way until about 6:30, then braid, and head to the horse show. But after conferencing with my trainer on Friday, we decided I needed to get there bright and early to hand walk Jamp in the ring. It certainly wouldn't hurt to let him smell the jumps and take some time to acclimate in there. Boo. While I would have plenty of time to braid at the show, braiding in the trailer can be... well... interesting. I decided to braid the top 1/3 of his mane at home then finish his mane and do his tail at the horse show. Thus, my alarm went off at 3:45. (Remember in college when you'd first be thinking about going home at 3:45?)
Thankfully it was the weekend (finally!) and we didn't hit any real traffic on the way there. Upon arrival, we got Jamp unloaded and I meandered him all around the ring, letting him have some grass when he wanted. He was very relaxed in there, and didn't seem terribly interesting in anything at all. Not even the spectator tent which was seemingly breeding dragons last year. As we were taking our final lap however, a herd of ponies and their tiny humans went trotting past the ring. Out came the fire breathing Jamposaurus Rex: tail flipped over his back, doing his best Lipizzaner impression. Sheesh. I coaxed him out of the ring and away from the throng of ponies and put him back on the trailer for awhile. Once he'd calmed down, I went ahead and got him all braided. Then waited around a little. Finally around 9:45 I took him up to the indoor ring to lunge. It was a hot day, in the low 90's so after lunging I had to wash him off. Then more time in the trailer. Seriously. LONGEST DAY EVER!
FINALLY around 1, it was time to walk the course. It was a pretty simple course honestly, almost a disappointment. But really, who can complain about something being easy right? Besides, we all know it's much harder to do simple things than tough ones. At least when it comes to riding. 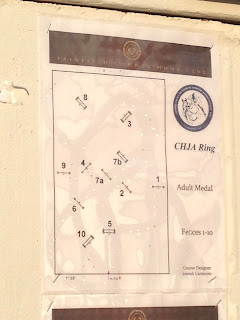 I was 14th in the order (out of 29) so there was plenty of time for my trainer to hop on and work out the kinks. I'm glad she did, Mr. Spookypants was WILD when first starting. Thankfully he remembered he's old and has been showing for three days now, so it didn't last too long. I didn't jump many schooling fences and was feeling pretty good when it was time to go in the ring. Jamp walked in like a gentleman and jumped around really well. I was a bit slow to the first two jumps which was the only roll back on the course. If I was going to make that error anywhere, that was the place to do it without causing a problem. I thought the rest of the course went very well. I scored a 77 which I thought was perhaps a little low but not bad given my slow jumps to start with. It wasn't until I watched the video that I realized we crosscantered in one of the bending lines. That made that 77 pretty generous!

I managed to JUST make it into the flat phase. Literally. My score was the cut off. The flat was uneventful with barely any testing at all other than a sitting trot. Everyone who makes the flat phase winds up getting a ribbon as they pin through 12th place. I guess my flatwork wasn't anything impressive as I stayed where I started in 12th. 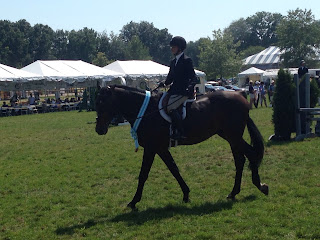 Obviously, it would have been awesome to move up a spot or two, but I was just so happy to have made it into the flat (not to mention, 12th place is the prettiest color ribbon I've ever seen). Two years ago, with Rio, I finished in second which was pretty unbelievable. But last year with Jamp, it didn't go well. We made it around the course without stopping or anything really terrible, but with some bucking and minor running away moments. So just being decent was all I really needed out of this day. Walking away with some big ribbons was just a bonus. I'm REALLY proud of Jamp. I know it's hard for him to keep it together in these instances, and he did his best. Now if we could only fix this cross cantering habit he's developed.... (Fear not, I've called the vet to make sure it's not a physical problem! He'll be out hopefully next week.) 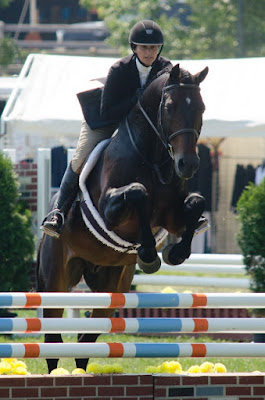 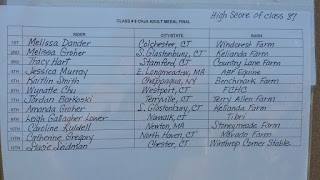 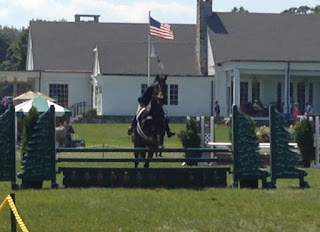 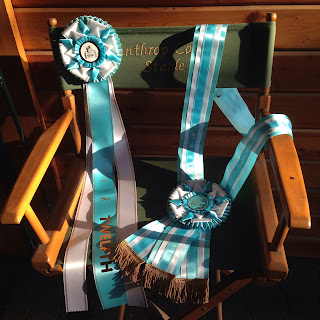 Posted by Stacie Seidman at 4:00 PM