Holidays are the time for... Running?

There's nothing like a good gorge fest to guilt you into getting back out on the road. Seriously. Thanksgiving was not kind to my mid section. Moooo. I did however take some precautions in an effort to counteract the gluttony that is Thanksgiving. (My family had five pies for dessert. Yep. FIVE! And yes, I sampled them all.)
Every year on Thanksgiving there is a 5 mile road race called The Turkey Trot that takes place about 20 minutes from where I live. It was my second race ever a few years back when I started running, and I've been attending every year since. It's not so much that running five miles is super fun. It's not really. Especially this year since it was barely above freezing. But it IS fun to meet up with your friends on a holiday morning and burn off some of that meal that's coming... Plus I love a good chance to wear something ridiculous. 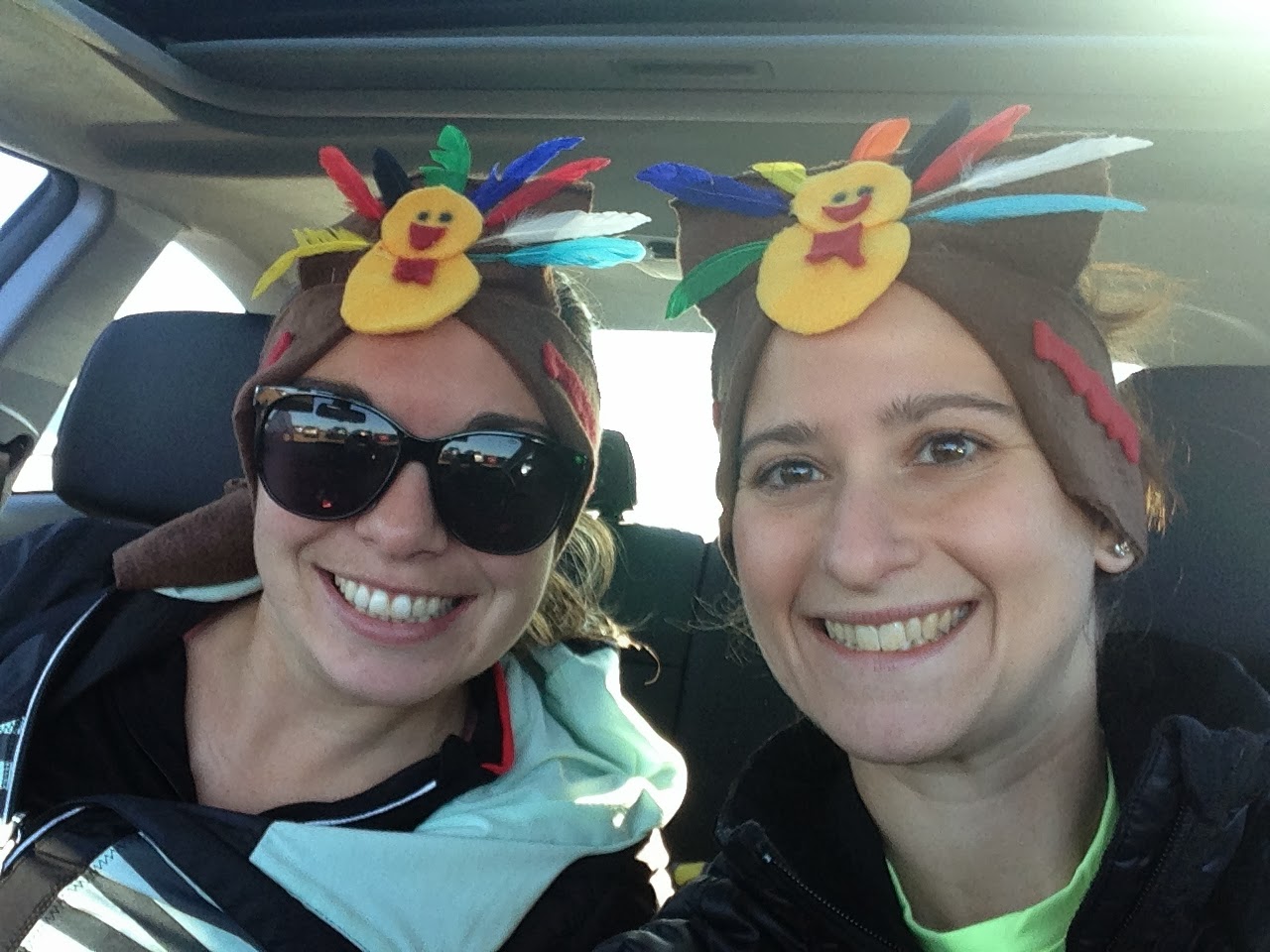 Katie from Running a Ragnor and our friend Vanessa made these awesome ear warmers for our run. They MADE them! How crafty right? I often search the interwebs for cute ridiculous things to wear, but rarely make them myself. Not only were they fashionable (ok, ok, maybe not fashionable) but they were also functional in keeping the ears warm in the cold and wind.
We started out running all together since it was very crowded, but gradually the faster ones went on ahead. I didn't mind at all though, as I was somewhat undertrained and definitely overdressed. (It takes a few cold runs to remember how to properly layer for these things!) Overall though, it was a great race, and I was pleased with my performance despite the lack of training. 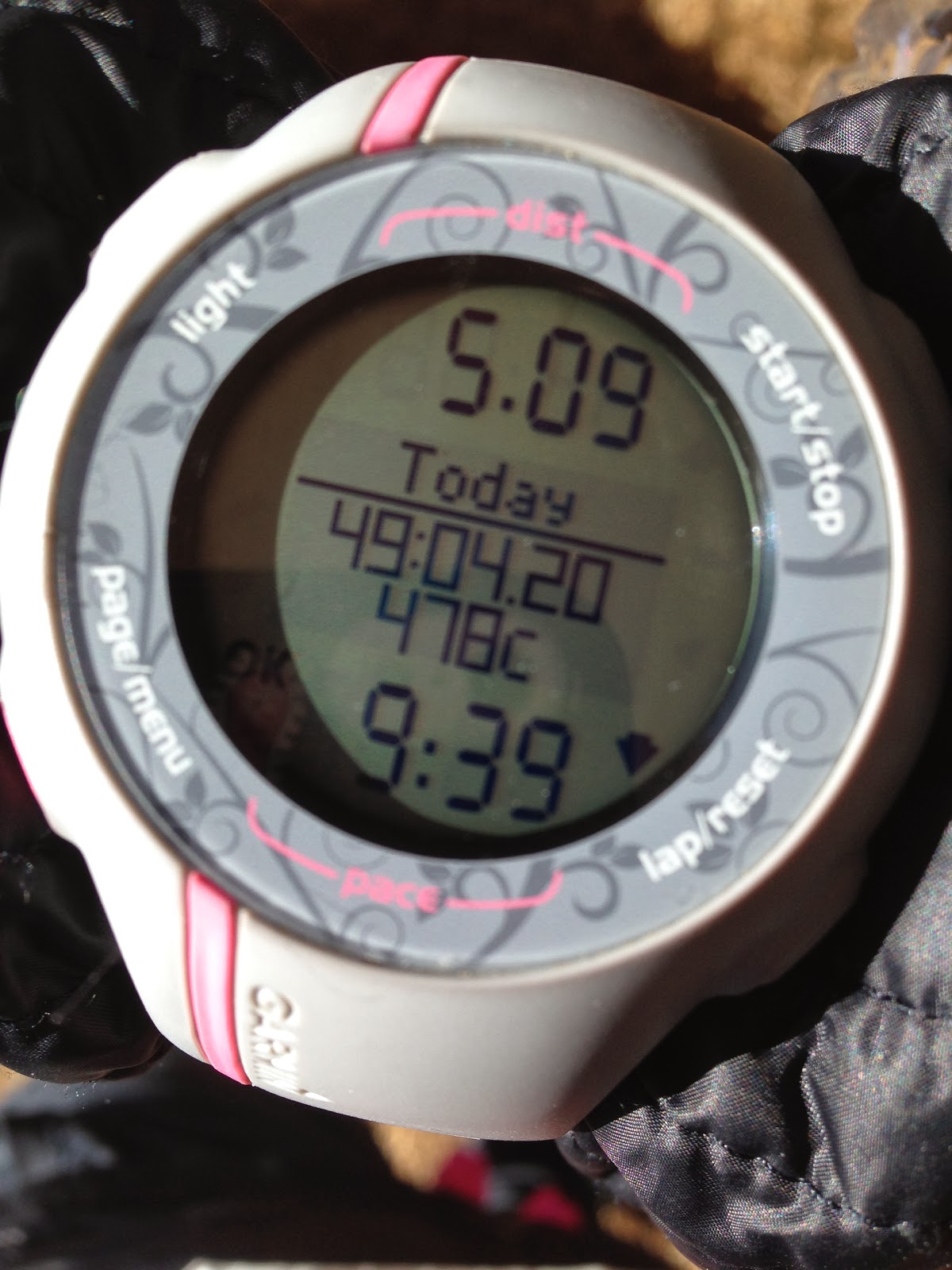 I tried to stay motivated after the Turkey Trot, and did manage to go out for a 3 mile run the following weekend. Good girl! But then alas, the cold, dark mornings got the best of me, and I didn't make it out again during the week. Vanessa and I had signed up for the Ugly Sweater Run this past weekend, but with it being only a 5K I figured I'd make it through without much training in between. If there's an Ugly Sweater Run in your area, I suggest you attend. Seriously. It was so much fun! And I've never in my life seen SO MANY ugly sweaters.
Instead of making hideous sweaters which was our first plan, we decided to do some good and ordered ugly long sleeved t-shirts from Stand Up to Cancer. I like the idea of making my outfits charitable. As it turns out the shirts are really cute, so we decided to take the outfit too far with matching leggings, skirts, and socks. We topped the whole thing off with some snowman antennae and the hat they gave out at the race.
The race itself was very nice. They released us in waves of about 500 so it was never too crowded. I think that was great planning. I hate dodging flying runner elbows. There were a lot of walkers in the early stages that were a little tricky to maneuver around, but not awful. The race was untimed and I forgot my watch, so I have no idea how well we did or didn't do. But if I had to venture a guess, I think we probably ran around 28 minutes and change. The course was adorable, with giant inflatable arches striped liked candy canes at each mile. They also had snow blowers and giant inflatables along the course. The water station was equipped with both water and hot chocolate, though we didn't stop for any. They had the same amenities at the end of the course so we didn't miss out. Our FAVORITE part of the race? The photo ops! 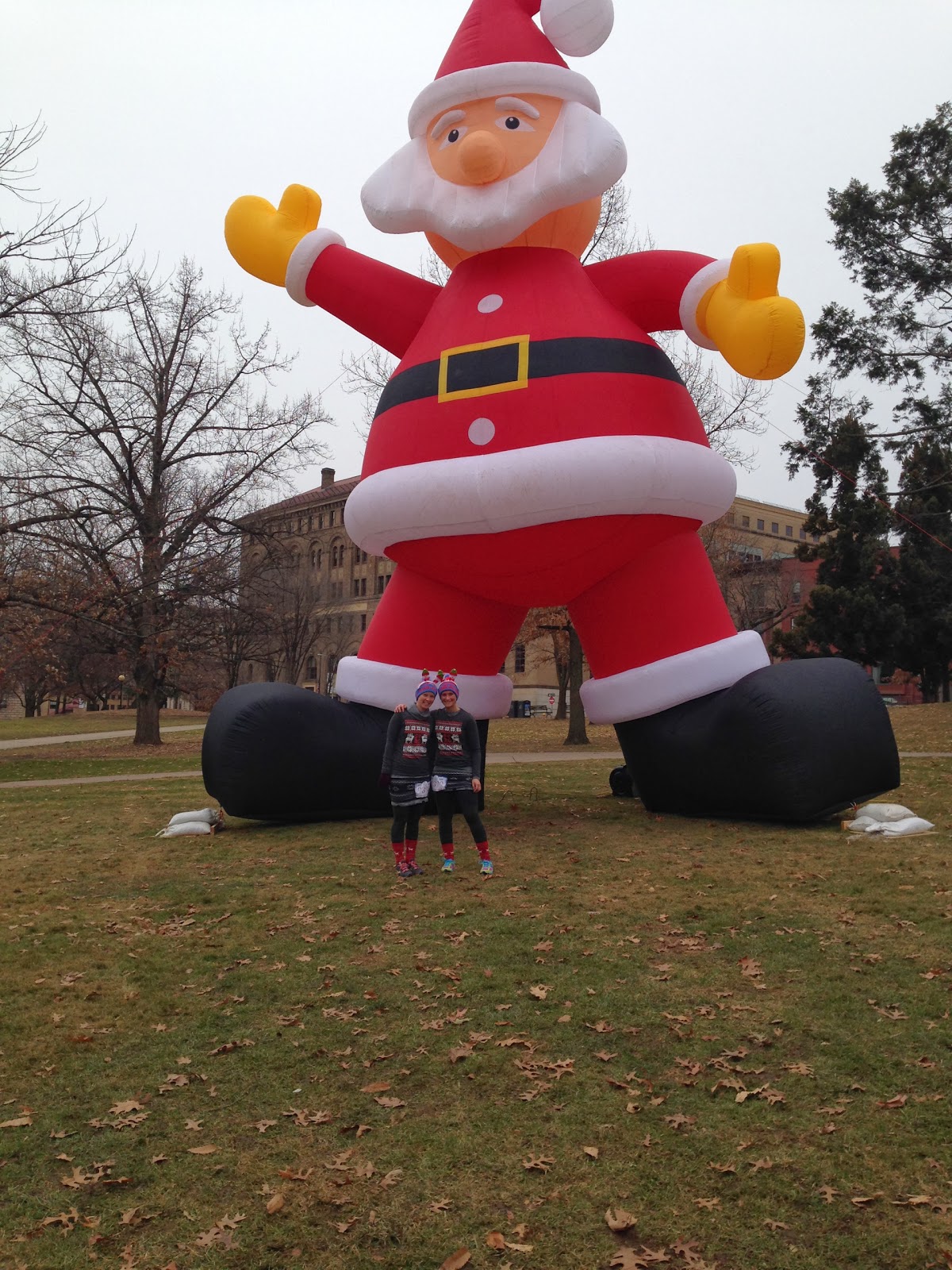 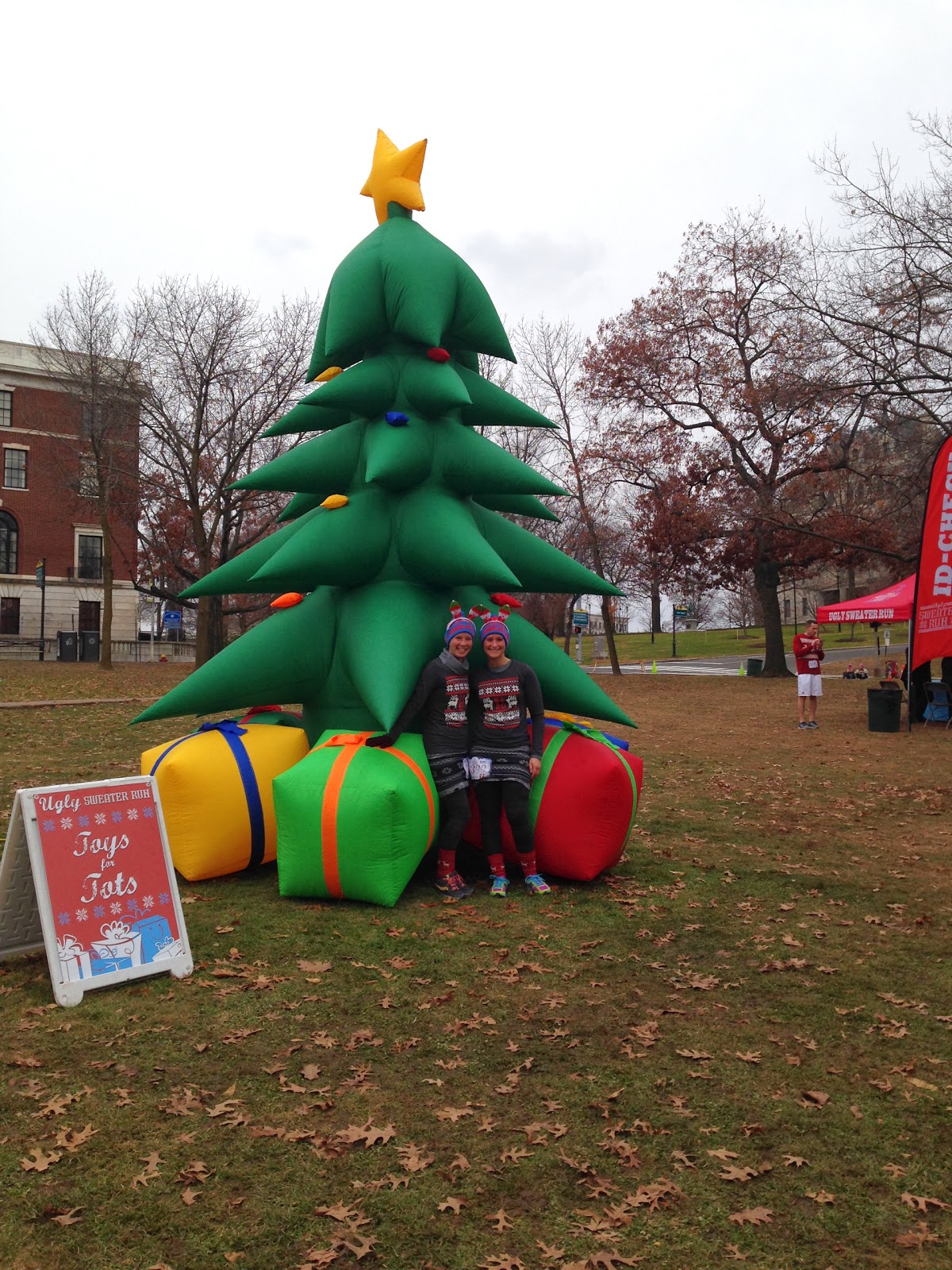 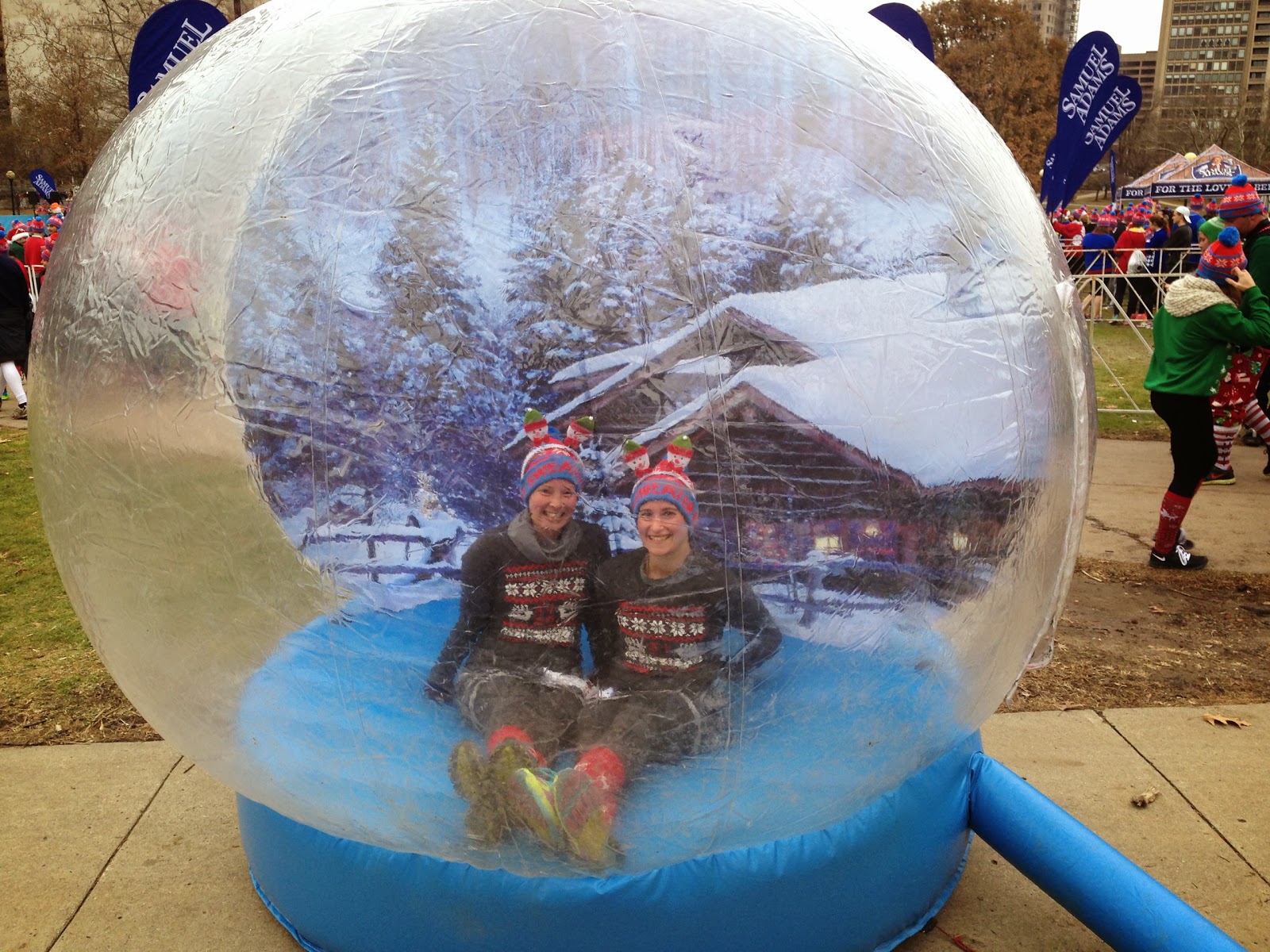 Alright that's it for my running stories for now. I don't have any races planned, but I do have a lot of eating in my future, so I do intend to keep up the fitness. We'll see how it goes... Best laid plans and all that.
Have any of you run any fun races recently? Silly race outfits, yay or nay?