Another busy week! All this horsing is super fun, and I'm loving actually having stuff to write about finally. 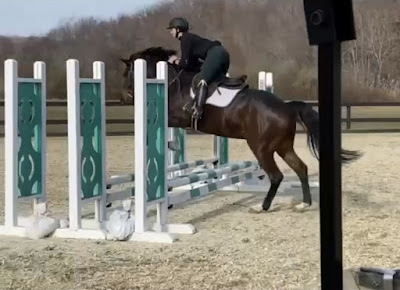 I got to have another lesson on Bellino this past weekend. You guys. We must have had some kind of breakthrough because I didn't get left at all. Not even once! We connected better during the flat portion of the lesson which I think for sure carried over to jumping. The fences stayed small (thankfully!) and I actually felt like I remembered how to ride. I'm a little sad he leaves this weekend. But nice to finish up on a good note anyway.  Short video below from our lesson.

Shiny had a busy weekend too! Saturday she also did a lesson. I signed up for a time with one of the short stirrup kids so we could ease into lessons. We did the flat portion outside. I was just a little not sure what to expect since I haven't actually ridden her in that enormous outdoor since last spring. But in true Shiny fashion she was the same pony I ride everyday. (She really is a reliable pony.) Then we moved inside to jump. She was fantastic! We just did some crossrails and a few small verticals. Unfortunately, no media to share though. The most fun part though was Sunday. We joined a few other girls on a trail ride around the property. I don't trail ride really ever, but have always wanted to check out the trails on the barn property. But I didn't want to go by myself (fear of getting lost in the woods all alone...). Anyway, you guys! Shiny is fabulous on the trails! She much prefers to bring up the rear, but as long as we stay in the back she just plugs along. She likes to look around and see the sights, but she's not at all spooky or rude. (Um... unless there's a grassy patch. Then she's very rude, grabs the reins out of my hands, and has a snack. Hey. She is who she is.) We were out there for almost an hour and were kind of frozen when we got back. But it was super fun!
Eros and I have been doing a Tuesday evening flat lesson which is a real ass kicker. There is way too much spent without stirrups. Way. Too. Much. Time. But I'm sure that will pay off eventually. Ugh. Worst. He's been great though. He did have his recheck last week with the vet and unfortunately, we did not get clearance for jumping yet. Next step is a neck injection and hopefully that will get us back there. And if not, so be it. I love this horse whether or not he can jump. There was a little bit of a horse cold going around in the barn, so doc didn't want to inject that day. Thankfully, I think it has run its course so hopefully we can get that done in the next few weeks. 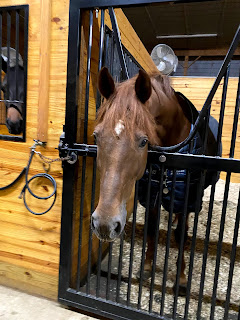 Pammon is going about the same. I do think the chiro appointment helped, but I think he needs another visit or two. I did today FINALLY feel some of the old oomph in his trot, so that's positive at least. We'll just keep plugging along.
In non horse stuff, I baked a pumpkin pie and pumpkin cookies on Monday: 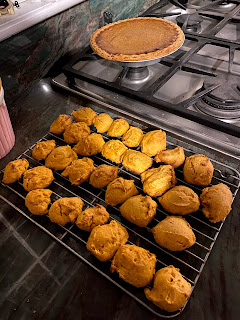 Cookies are almost gone... might have to make more. Good thing I have pumpkin left over! Hahahaha!
And lastly, in the old house problems category I found this guy in my bathtub the other day at lunch time: 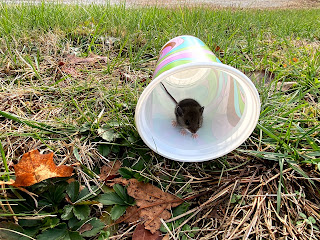 Clearly Ssseth isn't doing his job. Fortunately, when they're little teenage mice like this guy they're easy enough to catch and dump outside. I'm sure he's moved back in already though. Effing mice.
That's about it from here. Did you all have a good week/weekend? Big plans tomorrow? I'm celebrating alone this year, but do plan to Facetime with my mom during dinner. I'm honestly not at all bothered to be spending the holiday on my own. I mean. I have an entire pie to myself!

Posted by Stacie Seidman at 1:36 PM