Thursday's Threads... another one with logos everywhere.

Outfit day again! This is another one where I just logo everything. You guys. I can't stop. Having my Cricut up and running has been so much fun! I have lots more ideas, just not a lot of time to make stuff right now. But still. So fun! So here's what I wore yesterday to ride: 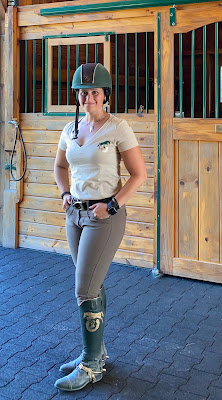 That top looks REALLY low cut from this angle... I promise there was no inappropriate exposure... Also I had a cami underneath. Anyway...
Helmet: Charles Owen 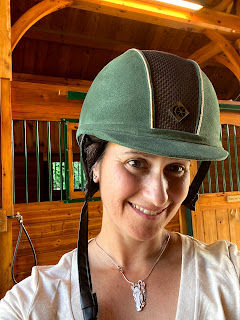 Greenie isn't nearly as ventilated as the One K's, but he sure is pretty! And he fits really comfortably too.  I hope CO comes out with a custom MIPS helmet in the future so I can upgrade to a new greenie.
Top: Stacie Original 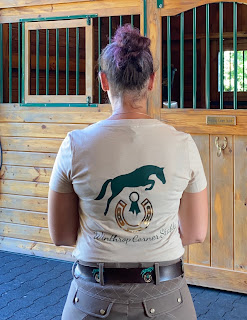 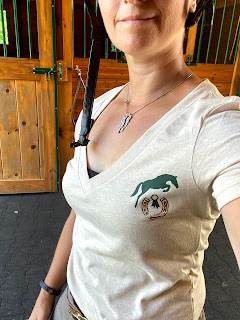 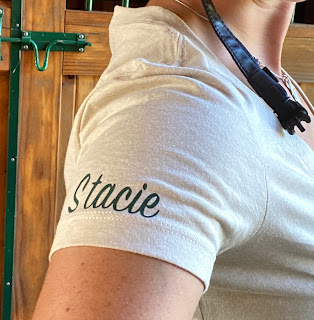 So.... when enhancing a shirt, it might not be a bad plan to try it on before you place your decorations... The logo on the front is on the side of my boob. Super awkward. Oops. Live and learn, right? I've been getting inexpensive shirts from Walmart and Amazon to decorate. I even found some hunter green athletic shirts, but I haven't gotten to them yet.
Belt: Stacie Original
Buckle: Mane Jane 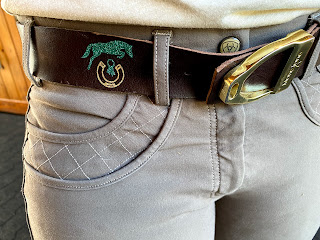 One of the boarders at the barn is a leather rep. They sell to a lot of the high end bag designers and what not. Whenever they clean out the office, they give me their scraps. And so I made this belt strap from their scrap! I only have scissors for cutting, so it's not that even... but it's good enough! I made it simple, just a strip of leather, which works well with both the Mane Jane buckles and my H buckles. I'm curious to see how long the iron on vinyl will last on the leather... but I've worn it a few times already and so far so good!
Breeches: Ariat 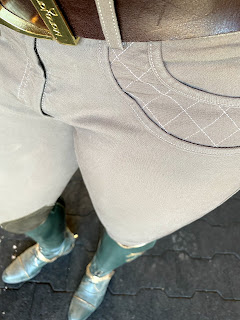 These are the more expensive Ariat breeches, but you all know me. I only buy this stuff on closeout. I do find the higher end models fit better than the lower end.
Socks: Dreamers & Schemers 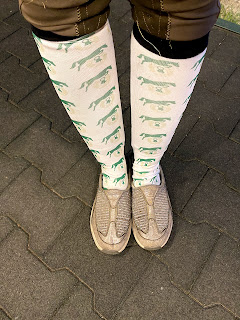 I'm pretty sure you've all seen these before. I have two pair and I also made a green version. If you haven't played around with making custom socks on the Dreamers & Schemers site, you're missing out. It's super fun!
Boots: Fama-4-All 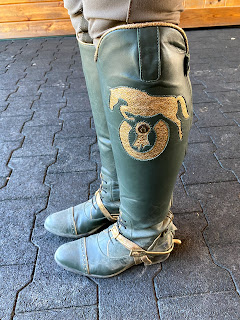 I still think these are the coolest boots in my collection. The quality isn't that of the Celeris, and they aren't AS super comfy as the De Niro's. But they are still completely amazing. I mean... my logo is on them! Look at it! And yeah... I know they're dirty. We haven't gotten rain in so long, everything is dusty. It's gross.
Arm Party!!!
Lefty: 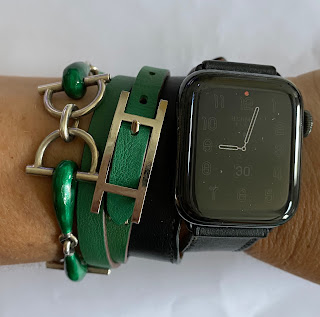 I need to work on some logo bracelets... I have some ideas but need to experiment. I figured the next best thing was just following the color scheme. So lefty is donning my FAVORITE bracelet. It's that green bit bracelet from Gucci that I happened to stumble across on Ebay several years ago. I love this thing so much. I paired it with an Hermes wrap bracelet that was also a second hand purchase.
Righty: 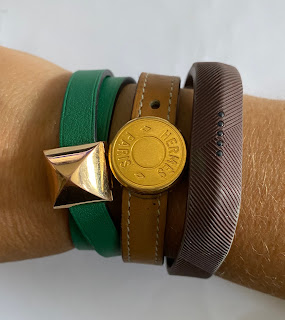 Righty is donning a couple of other second hand Hermes bracelets and my Fitbit. I do love fancy bracelets from fancy companies (clearly) but I think it's pretty crazy what they cost. So I've only ever purchased them used. Though I have received a few as gifts.
So that's what I wore yesterday, but I also have horse outfits to share! Spoiler alert, their bridles didn't match as I don't have the right bits on their green themed bridles. So we're skipping bridle photos today.
Eros: 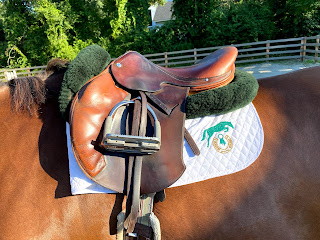 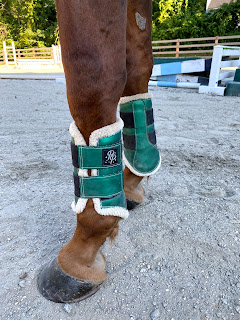 Eros wore my Hermes saddle with my mattes half pad, and a baby pad that I decorated with the Cricut. The photo doesn't really show it, but I used glitter vinyl for this one so it's sparkly and fun. He also wore his Punk Pony boots. These are the cob sized though, I need to find the horse size that fit him better.
Shiny: 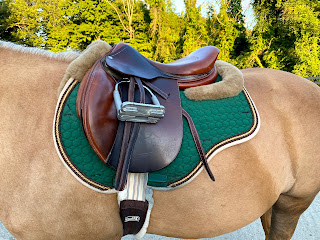 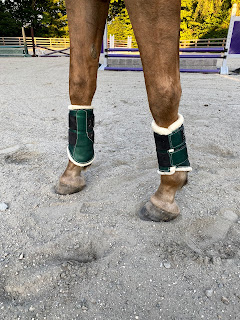 Shiny isn't wearing any logos. I can't bring myself to deface my fancy Mattes pad. But it is all the right colors, so close enough. Atop the Mattes pad she's using her Butet saddle. She's also donning her Punk Ponies boots.
And that's it for today! Do you have any craft fails like my shirt's funny placed logo? Any favorites from today?
Posted by Stacie Seidman at 9:56 AM