Might as well jump right in with the most pressing news. Friday the vet came out to see what's happening with Eros and his limpy leg. After watching him go under saddle and then flexing him, doc was pretty confident we were dealing with the same foot/ankle troubles as last year. BUT after blocking him, we were less certain. At first look, he definitely needs his feet fixed. His heels need to be opened up to relieve some of the pressure on that ligament he has trouble with. The weird one that wraps around the ankle down to the foot. Don't ask me what it's called, I can't remember. Anyway... that's an ongoing issue that we will forever deal with for him. Doc does still think that is the root of the problem. However, when he blocked the foot and then the ankle he was only marginally more sound. He didn't get the most sound until we blocked... The Suspensory. UGH! You guys. These ligaments are going to be the death of me.

The problem though, since the area was blocked it can't be ultrasounded the same day. (The block just lights everything up so you can't actually see anything.) The leg is pretty tight though, and not overly sensitive to palpation, so we're very hopeful that there's no real injury there, and it's just very sore from compensating for the foot bothering him. My vet is in Florida this week, but will hopefully be out a week from Friday to ultrasound that just to be sure.
In the meantime, we need to hopefully get him re-shod (he's due anyway), ice, wrap, and hand walk. I'm legit so over nursing and hand walking horses. SO OVER IT! Not to say I'm not doing it. Of course I am! And I really do enjoy the extra time just hanging with my horses. But like... I also really enjoy riding, lessoning, and showing... Just throwing that out there... 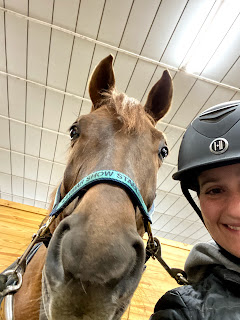 From a normal, not over-reacting perspective, he'll likely be just fine in a few weeks. But from MY perspective where my horses frequently take year long vacations, I'm worried. I'm sitting somewhere in between "everything is fine, this is no big deal" and "I should probably sell the farm and take up competitive eating." 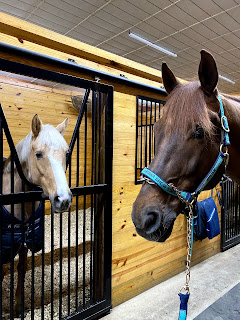 Fortunately, Shiny is back in light work. We even added in some canter over the weekend. So now we just have to build up her fitness slowly. She's also pretty over due for a trim, so hopefully the farrier comes out sooner than later. She's been a good girl though and seems to be sound. Hard to really tell because she's not all that interested in working and gives me the littlest western pleasure jog when I ask for trot... But it seems to be even at least. Once she's a little stronger and has some fitness we're going to need address the whole leg means go thing. Plenty of time for that though.

So that's really all we're up to here. Eros is walking and icing, Shiny is jogging with a little canter.

In non horse news,I've been making some headway in reclaiming my house from the hoarder hovel it had become. I just ordered some shelving for my bedroom and some cabinets for my pantry. So this weekend I'll be swearing a lot trying to put it all together. But it will (hopefully) all be worth it when everything is organized and neat! Once those two rooms are done, I can figure out what to do with the craft room I want to make upstairs in the smallest bedroom. And I think once THAT room gets accomplished I'll have a nice house again. But now that I've been looking at furniture and what not, I kind of want to replace my living room stuff. I have always disliked my couch. It looks nice enough, but it's really uncomfortable and I never sit on it. Be nice to have some furniture I actually want to sit in. But that's probably gotta wait till next year. We'll see.

And that's about it from here. How are things with you guys? Horses sound? Do anything fun with them this week? Is your house in order, or is there stuff all over yours too?