The weeks are kind of all the same lately, but that's not a bad thing! Barn owner left for Florida last Sunday, and this past weekend the boarder horses that are going headed south too. So it's a little quieter at the barn these days, which is lovely. Assistant trainer is around to teach, though she is going down for a few days next week. The barn manager will be teaching though, so I'll still get some jumping done, fear not!
Anyway, things are plugging along with Eros. I've jumped him in the Segunda a couple of times. I hate that bit passionately, but he really goes nicely in it. I just got the Bombers version though, which seems less angry, so I'm interested to see how he likes that. I have a lesson Thursday so I'll try it then.
I also found a bit that he's really happy in on the flat. Or maybe he's not at all happy, but he is SO soft and responsive in it! And he's wearing his ears, so I don't think he's pissed... It's a two ring leather mullen mouth from Sweet Billy's bits. I had ordered it awhile back for Jamp, but never got around to trying him in it. Rio really liked the loose ring version. I just ordered a Dee to try Eros in, but I don't think it will be the right bit to jump. We'll see though, you just never know! 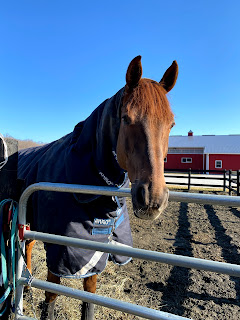 Anyway, we've had some good lessons. I continue to get frustrated with the lesson structure here though. They always want to do half flat work and half jumping each lesson. I'm not at all opposed to having flat lessons, but I like them separate. Why you ask? Eros is a very different horse flatting versus jumping. As such, the bits he uses are very different for each task. On the flat, I want something that he's more willing to take a feel of so I can help him flex at the poll, and lift through his back. Jumping though? I need something to lift him up off the bit. He LOVES to lean and drag when we're jumping. I'm not sure about you, but I certainly would have zero interest in accepting the Segunda bit for flat work. It's entire purpose is to get my horse OFF the bit. Not on it. So needless to say, the flat work portion of our lessons is pretty terrible. He does everything asked of him, but with his nose out and his back a little hollow. He's the most broke horse I've ever ridden on the flat, so even with the incorrect shape, he can still leg yield like a champ. It's kind of impressive honestly.

With the bigger bit, he's really been listening well over fences. I can make all the bending four stride lines happen, and he's not dragging me through the corners like an equine race car. Very nice change indeed! Despite our struggles figuring each other out, I am so completely enamored with this horse. He's really been my rock the past year, and I just can't get enough of him. Such a nice feeling to look forward to riding every day. I didn't always feel that way with Jamp and it really is something special.

Exciting things happening for Shiny here this week! Tuesday she started having turnout. Initially we gave her half a med paddock, just to be sure she wasn't going to be too nutty out there. She wasn't. Not at all. So from Thursday on she's had a full med paddock to play in.

The weather here has been warmish and wet, so the nice grass turnouts are all sitting vacant. Too wet for use unfortunately (or they'd get destroyed). So the horses are stuck in med paddocks for awhile. Most of them are handling it okay. A few are a little kooky. Eros is pretty adaptable. We let him have a free lunge once a week in the indoor to get his fresh out, but otherwise is his usual chill self. Since Shiny has been cooped up for so long with that foot, she's happy with whatever she can have!

Anyway, she's been very happy to get back outside. And on Saturday we started riding again! 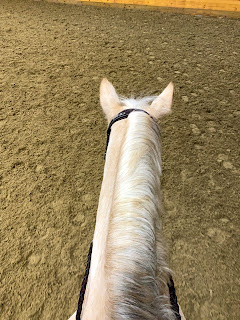 It's a weird restart for me... Normally I'm rehabbing a tendon or ligament, and there's a pretty strict schedule to get back into work. But in this case, there's nothing in particular we have to be especially careful of, other than her lack of fitness. I'm still taking it slowly though. No free lunging for a few weeks, that's for sure. So far, I've ridden her three times. We do about five minutes of just walking, then maybe ten or so of trotting and another 5-10 of walking. I'm planning to stick to this for two weeks, then add a little more trot. Eventually we'll add the canter, and then she can have her free lunge. I know she's dying for it! Sassy girl. She feels pretty sound, so I think we're going to be just fine. Thank goodness!
It's nice to be back on her. She really is a sweet little pony (most of the time) and though she has many opinions (for example, steering is stupid) she is a ton of fun. Especially her ridiculously slow western pleasure trot... Hilarious!
And that's about all that's happening here. I'm making gains in getting the house more organized and cleaned up. It's a work in progress, but it's coming along! So that's what most of my free time has been dedicated to.

How are things going with all of you? Horses doing well? Do you try to take advantage of winter by organizing and purging your house? Or maybe your tack room? (That's next... but maybe waiting for Spring when it's a little warmer.)