Chaos. My life currently. Pure Chaos. My job is legit out of control. I've mentioned recently that the Coronavirus is having an impact on my job, but it's gotten straight up nuts you guys. China has been shut down completely since Chinese New Year which puts production about two months behind at this point. We're running out of inventory, and it's gotten to the point where we have to allocate what's left based on previous purchases. We have THOUSANDS of customers and products, so you can imagine what a nightmare this is. Orders are still rolling in like everything is fine. But ugh. Everything is NOT fine. If production doesn't resume in the next week or two... well. Let's not even think about it.
And then P had a UTI. Which did not in fact clear up with the first round of antibiotics. So that meant a second more expensive trip to the vet. Fortunately, that seems to be resolving now with a different antibiotic. But will also require another trip to the vet in a couple weeks to be sure.

Since my animals really like to pile it on thick, and not to be outdone by Pia of course, Artie started coughing on Thursday night and coughed so hard he PASSED OUT! Apparently, dogs can do this, and it's not all that out of the ordinary... But I've never seen a dog just fucking pass out. It's horrifying if you've never seen it. Pretty much exactly the same visual as when a horse gets put down standing. HORRIFYING! I thought he died. Right in front of me. Thankfully he did not die, so I rushed him up to the 24 hour vet hospital near me. 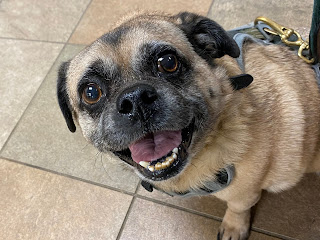 After waiting awhile (it was a busy night there) he got some x-rays and I was told it appeared he had heart failure. Best case scenario the vet said was about a year if the meds worked. Needless to say I ugly cried the whole drive home... and most of the night. Artie is only around 8 or 9 (he's a rescue, so we're not sure exactly) and has always been my healthy dog. So this news was out of no where for sure. He stayed the night at the hospital so they could run more tests in the morning and we could formulate a plan for him.

In a very rare turn of events, once the tests were run, it was determined by the specialists that he does not in fact have heart failure. THANK GOODNESS! He does have a heart murmur and we'll want to keep an eye on his heart as he ages, but definitely not heart failure. He also has a case of pneumonia. No fever so it wasn't obvious until the ultra sound, but it's definitely there. He didn't eat well this weekend, but I picked up some different food (back at the vets...again) and he's gobbling that right down. So I think he'll be feeling back to his old self very soon. He has a follow up in two weeks as well. Needless to say, between the er visit and all the office visits, the vets have gotten my entire pay check for the last two weeks. Sigh. The things we do for our fur kids! I'm just grateful everyone will be okay. I can always make more money (hopefully, assuming my job doesn't implode).

So yeah... Last night I binge ate Italian cookies and feel very little remorse. And that's my confession for today.