Blog Hop: The horse you bought 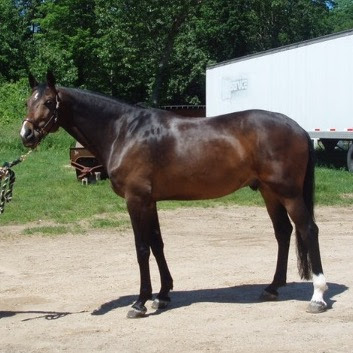 Nope, this isn't a post about horse shopping for stepmom. This is a hop I jumped on started by Catherine at Two and a Half Horses. And sorry for not actually linking, but I'm epic in my laziness today.
Now, this post has mostly been about transformations from the green to the less green, but my version is a little different. I'm doing my mine on my journey with Rio, and if you've been around for any length of time, you know he's ancient getting up there in years. But I think the theme still applies. And anyway, I'll take any excuse I can find to talk on and on about Rio.
Before heading out on the hunt for Rio, I had a horse named Cosmo, who was no longer very sound. He had one really good leg. The rest... not so good anymore. After much consultation with several vets, it was decided he was best suited for a 2'6" job. At that point in my young life, I was wanting to do more than that, but I had just moved home after graduating college and working as a barn manager for a year. I wasn't in a position to buy a horse, and so I was content to just enjoy Cosmo.
There was a young professional at the barn at the time who had been doing some importing of young horses  though. My dad got to talking with him one day, and the next thing I knew I was on a plane heading to the Netherlands. I know this might make some of you hate me. But I'm also fully aware of how lucky I've been to have my dad's financial support while I try to keep horses in my adult life. I very obviously couldn't have done nor do all that I have without him.
Anyhow... Rio was actually my second choice horse. Horse number one turned out to be out of budget for us. I'm not actually sure why they even showed him to us. But Rio was a very close second, so it wasn't hard to decide to vet him and arrange for him to fly to CT. Since Rio is a gelding, he arrived home pretty quickly after our trip out to meet him. And to be completely honest with you all, I didn't really love him when he first arrived. Rio had been ridden by very large Dutch men. Do you guys remember the Dutch guy in the last Olympics who got eliminated for a spur mark on his gray horse? That was Rio's trainer. Very tall. Very strong. Basically the opposite of me. Also it was winter when I got him, and he was rather cold backed. I would get on thinking this horse with the hump in it's back was about to launch me. But by the time he was warmed up, I couldn't keep him cantering. Forget about getting in a half seat at the canter! He thought that meant walk!
I didn't get frustrated though. I figured this horse could always be an investment. I could learn from him, get him to some horse shows, and sell him. Then I could find my next one that maybe I'd like more.
We started out slowly together. Rio was very much a made horse at 8 years old, but I hadn't been doing much in the year or so prior since Cosmo spent much of that time rehabbing. We began the year doing the low adult jumpers. 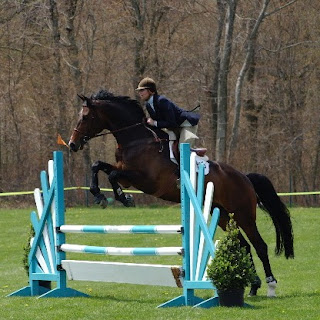 And getting to know each other. He was always very honest, but it took some time for me to figure out that I needed to have more contact with his mouth in order to keep him going. Seems counterintuitive. He was always ridiculously handsome though: 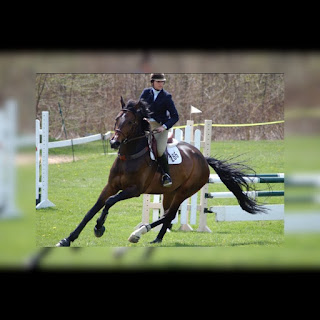 By summer we had moved up to the high adults. We had really started to find our groove! I was really excited for our future, and it seemed likely that we would be able to move up to the amateurs next year. At the end of that first year, we also dabbled in the hunters. That's when I realized this horse could show in any ring. 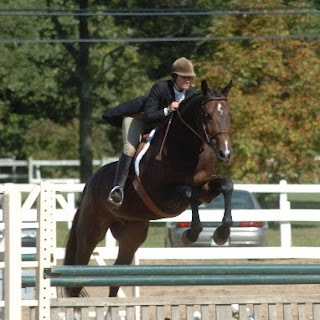 We had decided that year to finally go to WEF for a few weeks. I had never been, and was stupid excited about it. But a few weeks before we were supposed to leave, Rio wasn't feeling quite right. He wasn't terribly lame, just not quite right. After having our vet out, it was decided to take him to the vet hospital for some scans to try and find the issue. It turned out that he had torn his SI. Not career ending by any means, but he would need some time off. No Florida for us, but that was ok. He had a couple months of rest during the winter, and by spring he was ready to roll! And we did move up to the low A/O's. It was kind of a dream come true for me. I'm not very brave to the big jumps, but on Rio, it felt completely doable. Which isn't to say we didn't have our troubles. 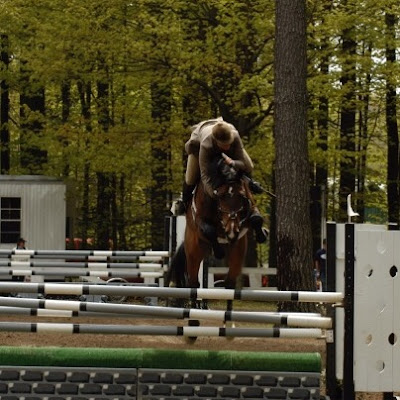 I fell of in our first big class together. At the second jump. Oops. But I got back on, and we had a great rest of the horse show. 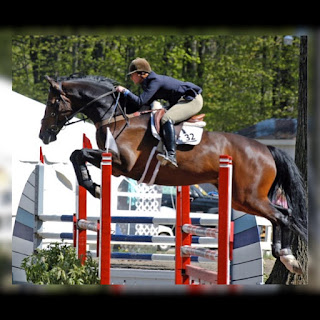 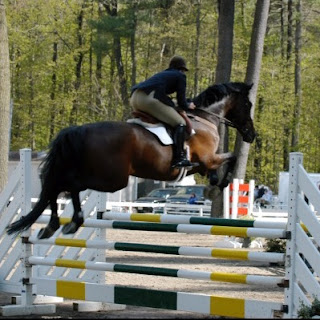 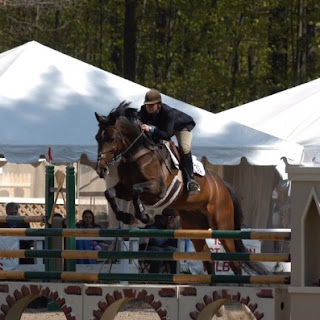 And our season continued on pretty nicely. 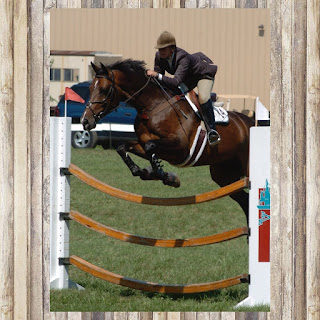 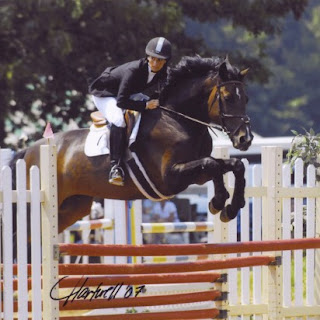 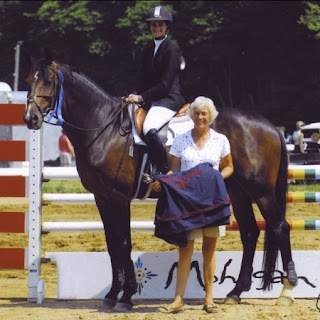 When I had first gotten him, Rio was very shy with his humans. He wasn't very social, and he thought all treats were poison except carrots. But over time he came out of his shell. 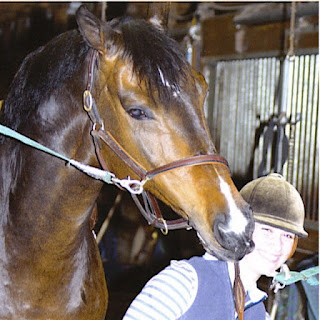 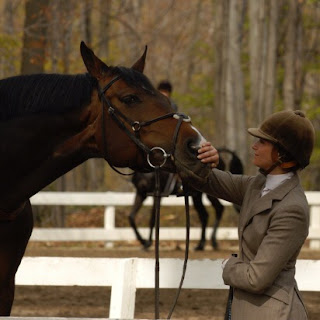 We only had the one full season doing the bigger jumps. The next year started out great. 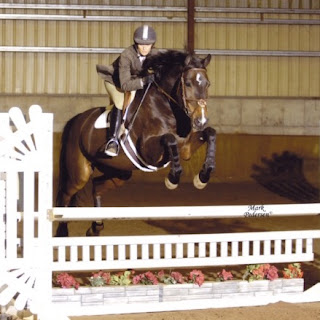 We did some shows at our home barn and things were going well. But then he was off again. This time a torn suspensory right front. That took a while to heal, but I let him take all the time he needed. By now he was my very best friend. Rio could have whatever Rio needed. And at this point my own barn was being built.
When I first brought Rio home he was just starting back to work. My years are fuzzy as to which injury we were on at that point. I think it was suspensory injury number 2. Over the years, he's injured the same leg's suspensory in three different places. But every time he came back. This horse is like a cat. Has at least nine lives.
It was obvious though, that it was time to start stepping him down. So he became a full time adult hunter at that point. No more jumping any higher than 3'. He would double as an eq horse sometimes too. And he was really good at those jobs. It's pretty rare to find a real three ring horse, but Rio certainly has been just that. 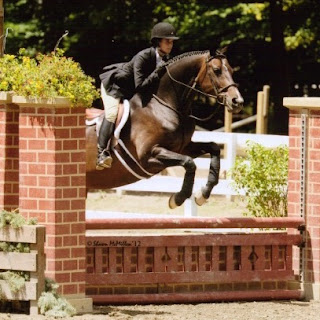 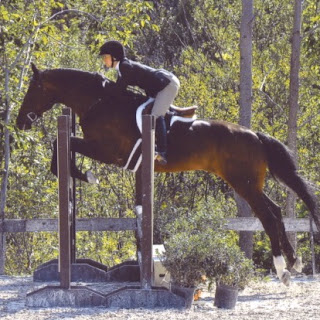 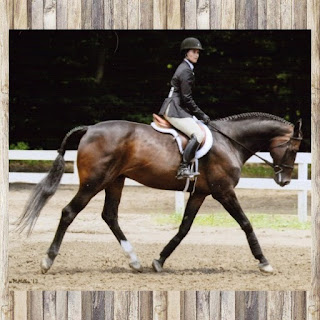 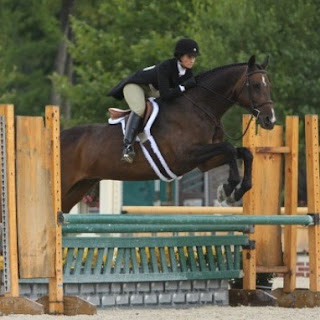 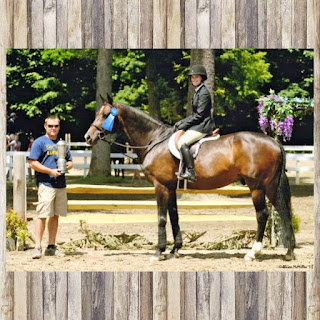 In his last year showing, I decided at the last minute to take him to Ct finals. I was originally going to take Jamp. But Jamp had been bitten by a tick and was exhibiting some signs of lyme disease. So I asked Rio to step up to the plate. I knew he'd be just fine in the first round. But I was worried about the flat class. He often got worked up when horses came up behind him, and sometimes would kick out. Once we made it through the flat, we were sitting in fourth place. They test the top four. I thought for sure I'd stay in 4th for two reasons. Rio was a cheater at the trot fence and liked to canter the last step and also, I didn't think he'd actually halt at the end. But he proved me a big liar and we had pretty much a PERFECT test. He really is a magical unicorn. We finished in second. 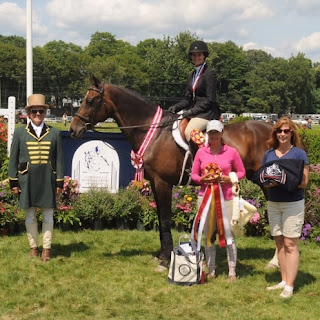 We had a nice winter off after that, and come spring is when disaster struck. That one weekend when he started acting weird. Couldn't chew his hay to start and by Sunday couldn't stand up without a wall next to him. After a couple vet consults we were on our way to Cornell to receive his EPM diagnosis. 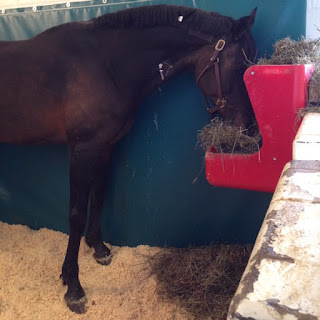 Rio enjoyed two years of being a pet after that, while he regained his strength and balance. And that spring, two years later, Doc said I should ride him. I told him not to toy with me like that and he said he was serious. We spent some time just lunging with tack and remembering what a bit was. I'm sure it felt different to him after the EPM problems. It had affected him mostly in the facial nerves, so his tongue worked differently than it had used to. But he took that all in stride, and I had the very best moment of my life when I climbed back on him for the first time in so long. 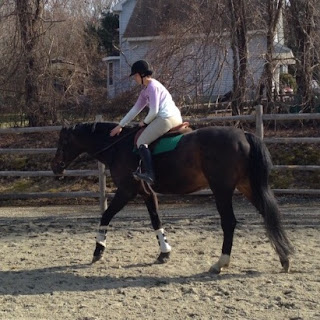 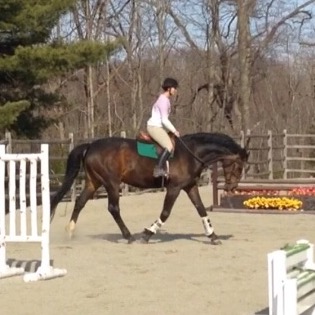 It was like nothing had ever happened. Sure he was a little lower in the head, and a lot less strong. But overall, he was the same.
This year he came out of winter with a bowed tendon. It's not looking like it's going to heal, so he's officially retired. But he's still ridiculously good looking. 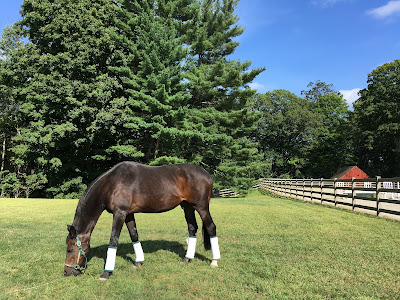 And he will forever be my very best friend. He's not the same horse that I imported from Holland all those years ago. But he's a better horse. He's my best friend in the whole world. He's come completely out of his shell to the point of sometimes having too much personality. And there's not a treat he'll say no to anymore.
I hope he still has lots of years left to spend with me. He's twenty-two now so who really knows. I'll definitely treasure every second of every day though. And that my friends is how Rio has changed from the horse I bought. He grew into a magical unicorn. 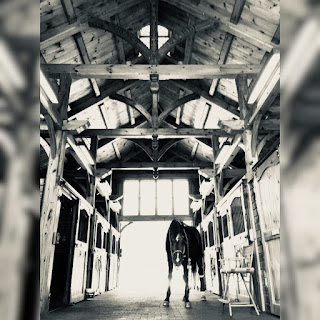 Posted by Stacie Seidman at 4:38 PM